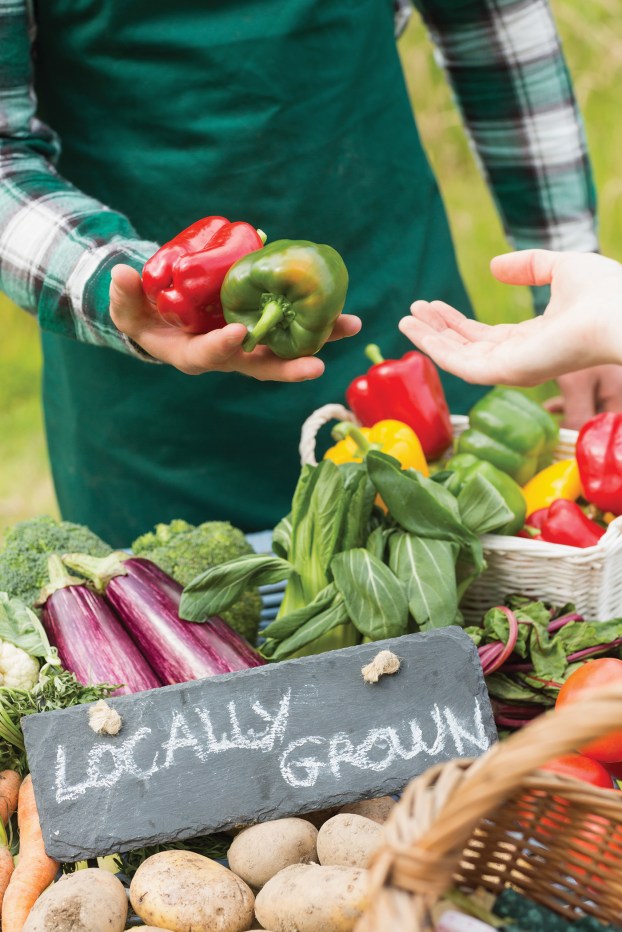 Thanks to several months of strategizing, planning and groundwork, Nicholasville’s new Farmers’ Market is set to debut next month.

The event will kick off Saturday, April 29 from 9 a.m. to 1 p.m., a time slot that it will occupy each Saturday through October. Its inception comes courtesy of the current class of Leadership Jessamine County, who convened at a retreat last August and began discussing possible service projects that they could embark on to benefit Nicholasville.

“We started talking about the strengths of the community and what areas could use some support,” Pastor Carol Devine, a member of Leadership Jessamine County, said. “There are many strengths, but the thing we kept coming back around to was health and well-being, and access to good and healthy foods.” Brainstorming amongst the group led to discussions on topics such as community gardens, but the graduation date of the current Leadership Jessamine group led them to choose a farmers market program back in September. It was a sustainable idea and a baton that could be handed off.

In early November, the team hosted an open house at the Jessamine County Public Library and invited the community to attend and offer feedback and ideas. They asked everyone who had visited a farmers’ market where they went, and nearly everyone said Lexington. They then asked everyone which types of items they would purchase at a local farmers’ market, and what types of experiences people would like to see offered.

Local farmers and producers were also asked about their interest in participating in a local market, and what they would like to see there, as well as their concerns.

The local input was imperative because the market will feature goods strictly grown or produced in the Bluegrass State by producers in surrounding counties.

Devine said that once all of the information was gathered, a Farmers’ Market Board was put into place to start formalizing decisions. The board met for the first time in January, and officers were elected for key positions. A logo was also designed, and can now be seen on the group’s Facebook page.

“By that time, we had drafted bylaws, guidelines, applications and had checked into insurance for the market,” Devine said. “I had spent a lot of time looking at grants that we could apply for. And we started checking back with other farmers’ markets that we had visited last year, and asking more questions that we had because nobody in Leadership Jessamine County is an actual farmer!”

Despite most members of the community-minded group lacking in first-hand experience of agricultural production, the class does include an agriculture teacher at Jessamine County Technical Center, whose connections in the ag community have come in handy in the planning and promotion for the market’s inaugural year.

Local entities have also stepped up to help the new farmers’ market get the momentum it needs to get going. Nicholasville Tourism gave $1,000 to help out with the market as a tool for promoting the city.  The Jessamine County Health Department gave the project a $1,000 grant, and is planning to partner with the market to provide information and services to help promote living a healthier lifestyle to market-goers. In addition, The Jessamine County Public Library is also on board to assist in educational offerings on health and nutrition.

The market is also in a partnership with the Nicholasville Food Pantry, whose 501 (c)(3) the market will operate under for its first year. In return, the leftover produce at the end of each day will go to the pantry to help ensure that the families it serves have access to fresh, locally-grown produce.

To date, the Nicholasville Farmers’ Market has raised nearly $7,000. In addition, they have applied for one matching grant for $3,900 through the governor’s Office of Ag Policy, which has been approved by the Jessamine County Ag Development Board and is now in Frankfort. They are working on a second grant through Kentucky Proud, by whom the market has already been certified. According to the Nicholasville Farmers’ Market’s Board President, Brad Sumeracki, a possible grant through the Farmers’ Market Support Program is also being pursued.

“One of the things that Leadership Jessamine really wanted to do is raise enough money, get enough grants, get enough support that we can glide through the first season, Devine said. “We knew this was going to be the tough season. Any money left over, they can use to start 2018.”

Right now, the main focus is recruiting value-added producers of products like breads and jams. Interested qualifying vendors for the market are strongly urged to apply at the website, www.nicholasvillefarmersmarket.com, or by picking up a form to fill out at the Jessamine County Extension Office.

Producers or artisans that wish to participate must pay for their space, as well as pay four percent of their monthly income from sales. One space can be purchased for $50, or two for $75 for the entire market season. The income generated will be used to help support the market and facilitate its growth.

The Farmers’ Market Board is also seeking to book live musical entertainment for each Saturday outing. Sumeracki said that the live entertainment is itself a part of the market, and produces a “level of atmosphere you don’t typically get while shopping.” The incorporation of weekly entertainment is one element of the market that was presented in the public feedback, and the Leadership Jessamine County members agree that should play a role.

“We want it to be an experience,” Devine explained. “There’s music, there’s food you can buy already prepared…that’s our ultimate vision—a Saturday morning experience.”

To bring that experience to life, the group first needed to secure a location for the market. With the promotion of the city and bringing more people downtown being among their goals, they—along with the City of Nicholasville—made the decision to hold the market on York Street. However, due to input on logistics from vendors, the market’s board is currently working on a lease agreement with the city to move the location to the North Main Street site that the city plans to eventually build a new city hall on.

“There was concern that it was going to be hard for farmers to pull in with their trucks and all of their stuff,” Devine explained.

Sumeracki told the Jessamine Journal that the North Main Street location is a good short-term solution for the event in its inaugural year. But he thinks that for the project to reach its maximum potential as a successful community-wide event, the long-term plan should be to eventually have the market on Main Street in downtown proper. There,  it can be the focal point of Saturday mornings throughout the season, and bring shopping traffic back to the heart of city. To reach that goal, however, Sumeracki—who brings to the table past experience as an organizer of such farmers’ markets—says that it must build itself up to where it offers the city a financial incentive to permit the necessary street closings and other allowances for a Main Street locale. That locale, he said, would benefit both the vendors and Main Street businesses—and therefore the city itself—as the market grows larger and the pedestrian traffic from shoppers increases.

With that increase in shoppers comes an increase in healthier diets around Nicholasville.

“We know that people who have a plate that is more colorful are eating healthier,” Devine said. “We know that things that are grown in our gardens or in our farmers’ fields are more nutritious than what we buy at the store because you eat it closer to when it was picked.”

She said that when purchasing food at a farmers market, we are buying food that is more nutritious and trying foods that we wouldn’t try otherwise.

“There is more support for trying new foods that you may not have tried before,” she said.

Sumeracki agreed, pointing to the benefits that can come from purchasing the fresh foods from small producers, who can help teach market-goers on various ways to prepare their products for new meal ideas. The educational value of the farmers’ market is also there for vendors as well, particularly younger producers getting their feet wet in the world of ag production.

“We’re really hoping that this farmers market will allow some of our FFA members to try something, whether it be eggs or to grow a garden or one particular thing, and to give it a try,” Devine said. “They could handle $50 to come and give it a try and see if that is something they can do for a career.”

She said that they want to be as accommodating to farmers and producers as they can to encourage growing participation not just for the produce itself, but for the educational opportunities it brings. She noted the strength of the local FFA chapter and the number of young farmers in the area, yet many of the members lack an avenue or opportunity to practice agriculture commerce. A strong farmers’ market can supply that opportunity.

In order to ensure that its healthy offerings are available to everyone, purchasing options at the Nicholasville Farmers’ Market will increase after its initial year. Next year, shoppers will be able to pay for goods with Snap, WIC and senior vouchers. In addition, the Double Dollars program for Snap recipients is being looked into as well to assist those with lower incomes.

“The other thing we know about farmers’ markets is that the money stays in the community,” Devine said. “It is beneficial to the community all the way around.”

That mindset is a throwback, she pointed out, to a time decades ago when nearly all of the food in a community was provided by the producers who lived there.

She said that in those days, people knew their neighbors and therefore the producers of their food. That idea of a smaller, more connected community is one that is promoted by programs such as farmers’ markets, and the members of Leadership Jessamine County hope that the new one in Nicholasville maintains that community spirit.

“Our lives are richer because of that,” Devine said

Sumeracki said that the Farmers’ Market Board is looking for more potential members, as well as artists interested in providing live entertainment. Anyone interested in participating in either capacity can contact Brad at brad@sumodesign.net.

A healthy smile can lead to a healthy life

Keeping your teeth clean and healthy ensures much more than just a beautiful smile, it can also attribute to your... read more