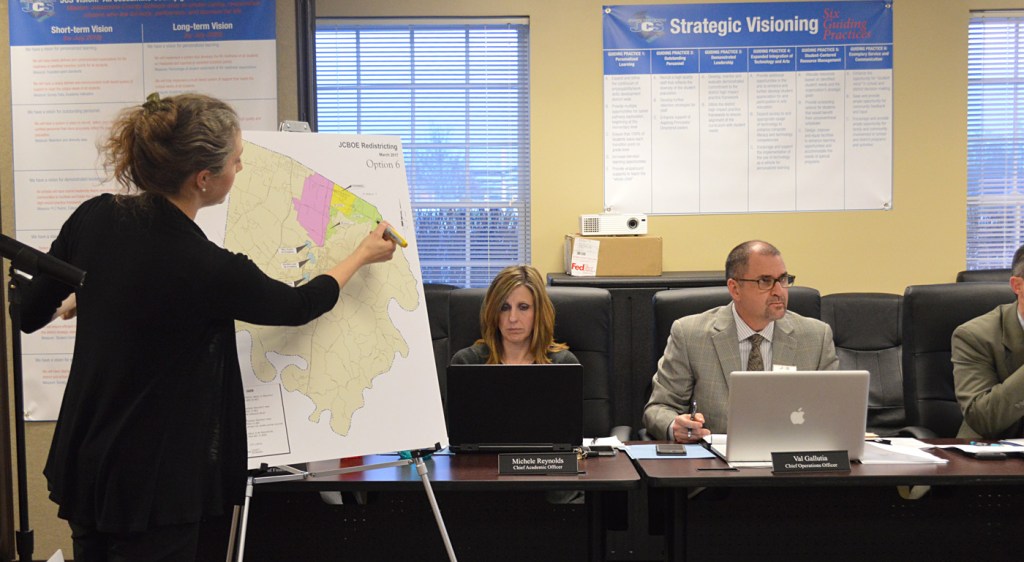 After much deliberation and discussion, the motion to approve option two for the proposed redistricting plan failed at the Jessamine County School Board meeting on Monday night. Though it was done peacefully, it was not quietly.

Option two was among three different redistricting options presented at the Feb. 13 board meeting.

Option one affected the fewest number of students, but it did not do as much to address the concerns of overcrowding.

Option two addressed Brookside Elementary and Rosenwald-Dunbar Elementary. It would cause the population at Brookside — a school building with the capacity to hold 630 students — to go from an estimated 523 students to 573. In turn, RDES — a school building that has the capacity to hold 620 students with an enrollment of approximately 670 — was estimated to decrease by about 76 students.

Option three would affect every elementary school in the district, but it would be the most long-term resolution. This proposal would address concerns with both RDES and Nicholasville Elementary. However, it would also impact the most students. A total of 471 elementary students would be affected by this option.

At the beginning of Monday night’s meeting, community members were allowed to step forward and voice any concerns. Several parents came forth, most with the same issue in mind: redistricting.

Some called option two a band-aid plan, while others were worried about the emotional and academic effect redistricting would have on students. Some voiced that they wanted their child to remain on the West track, while others requested a grandfather clause and better communication from the board.

One parent, Virginia Mims, has been in contact with the board and the school administration since the plan was brought forth at the last meeting on Monday, Feb. 27.

“Yes, Jessamine County is growing,” Mims said as she began her presentation at the meeting Monday. “But the solution for growth isn’t short-term band-aids that need to be reversed a few years later.”

Mims urged the board to slow down, step back and give more time and thought to their decision and to vote no to option two.

Her concerns with the redistricting plan consisted of lack of adequate parent notification, lack of public forum and lack of thorough analysis, all of which she said were yet to be resolved.

She also pointed out weaknesses of option two which were safety, school mobility, and sustainability. Mims presented the board with three more options that she and other parents had put together after speaking with someone who had served on the Jessamine County Joint Comprehensive Plan Update Committee. She compared each option with option two, based on the three weaknesses.

Mims also suggested the board take into consideration areas that were not included in the last two redistricting projects, maintaining or improving free and reduced lunch balance across the three schools, geography and bus routes.

“You can vote yes, and soon look ridiculous for passing an obviously short-sighted plan to deal with overcrowding possibly as small as three students,” Mims said. “Or you can vote no, work with planning and zoning and work with the community to create a long-term sustainable plan that will enhance safety,

minimize the negative impact on kids and be sustainable so we’re not all back here again in two more years. Let’s slow down, step back and work together.”

After public comments, the meeting continued on as normal until agenda item D5, the consideration of approval of the proposed redistricting plan.

The board had many questions regarding Mims’s presentation and ensuring that all the proper steps had been taken to create option two.

Assistant Superintendent and Chief Operations Officer of Jessamine County Schools, Val Gallutia, who led the group who came up with the current options, said some of the items had already been addressed.

One of those items being the grandfather clause that would allow students in fourth grade and up to remain on the tracks they were on prior to redistricting.

Gallutia said he and other administrators met with Nicholasville Planning and Zoning and the Joint Planning Commission and had taken their information into consideration while creating option two.

Keeping the school’s balance when it came to free and reduced lunch was also an obstacle for the options created by the parents.

“There’s a lot of information I was unfortunately not able to share, just because of confidentiality reasons,” Gallutia said.

Gallutia also said the options presented did not address the upcoming issues with the potential overcrowding of West Jessamine Middle School.

“As those particular sections do grow, we are certainly going to be dealing with, in time, overcrowding there as well,” he said.

Gallutia pointed out that the reason option two moved a greater number of students is to bring the balance down to where Rosenwald-Dunbar would have room to grow if necessary.

Currently, the elementary school is doing the best they can with the room they have, such as using unconventional parts of the school for classes. They have converted a large portion of the library into a computer lab and also small group instructional areas, said Patrice Jones, director of public relations for Jessamine County Schools.

“If we don’t do anything, at the current rate, if we grow the way we grew this year, you will have to bring in trailers,” Gallutia said.

As mentioned in previous meetings, these trailers can cost up to $20,000 a month to rent.

Board member John Branscum said he feels the calendar has driven the process in order to submit the staffing allotments on time. He said even though he would hate to continue putting it off, there needs to be more communication on the matter, and all the best options need to be evaluated.

“Without seeing more information, and hearing more about these other options, I just firmly cannot give a vote,” he said.

Branscum said since he has been on the board, this redistricting has brought forth more community communication than he’s seen with anything else so far, but unfortunately, it has been negative due to the way it has been handled.

“I just really feel that we need to firmly look at the options, all the options, on the table,” Branscum said. “And say hey, we looked at everything before we made a final decision.”

A parent in the crowd began to ask a question during the discussion but was quickly told not to disrupt the meeting after the allotted time community members are given to speak.

After the warning had been given, three community members had to be escorted out by Nicholasville Police Officer Kevin Grimes. Mims was the first to go.

“I know that I will be removed for saying this, but it is clear to me that you need a public forum before voting,” Mims said before being escorted peacefully out of the meeting with two other parents who spoke out after her.

Following much of the discussion, Board Chairwoman Amy Day abstained herself from the vote because she owns property in an area that will be redistricted.

The discussion for the night ended in a 2-2 vote. Board members Hallie Bandy and Debbie Hood voted yes to option two.

Branscum and board member Bobby Welch voted no.

Option two was not passed and no official action was taken at the meeting.

It is unclear how the redistricting will pan out. One thing is for sure, the matter is far from over.

Mims said she is still requesting a public forum and she now has constructed a nine-member Community Committee on Redistricting.

“We hope that the administration and the school board will work cooperatively with us so that the concerns and perspectives of the public are thoughtfully considered in the creation of the next redistricting plan,” Mims said. “We will also advocate for a public hearing to be held well in advance of the next vote.”

The board also approved the first reading of a revision to policy 09.11, which deals with school attendance areas.

The revision would eliminate the childcare request to change attendance areas. The policy says even though the student’s permanent residence is not in a particular school’s attendance area, the child is allowed to go to that school because a babysitter or a family member who watches the child does live in the attendance area and the child rides the bus to or from school.

The revision would phase out the option of the school picking up and dropping off any new students for private child care providers beginning the 2018 – 2019 school year, and school years after that. However, it would not impact students who are in a licensed care facility within the district area or on the transportation route.

This revision would impact all schools if passed. Currently, Rosenwald-Dunbar has approximately 29 students using the child care option according to a presentation shown at the meeting on Feb. 13.

More will be discussed on redistricting in upcoming meetings, and the second reading for policy 09.11 will be voted on at the next meeting at 6 p.m. on April 24. The next work session for the school board will be at 6 p.m. on April 10.

For more information about the redistricting, visit Jessamine County Schools website at http://bit.ly/2nA9khV.