Get friendly with the herd at Blackfish Bison Ranch 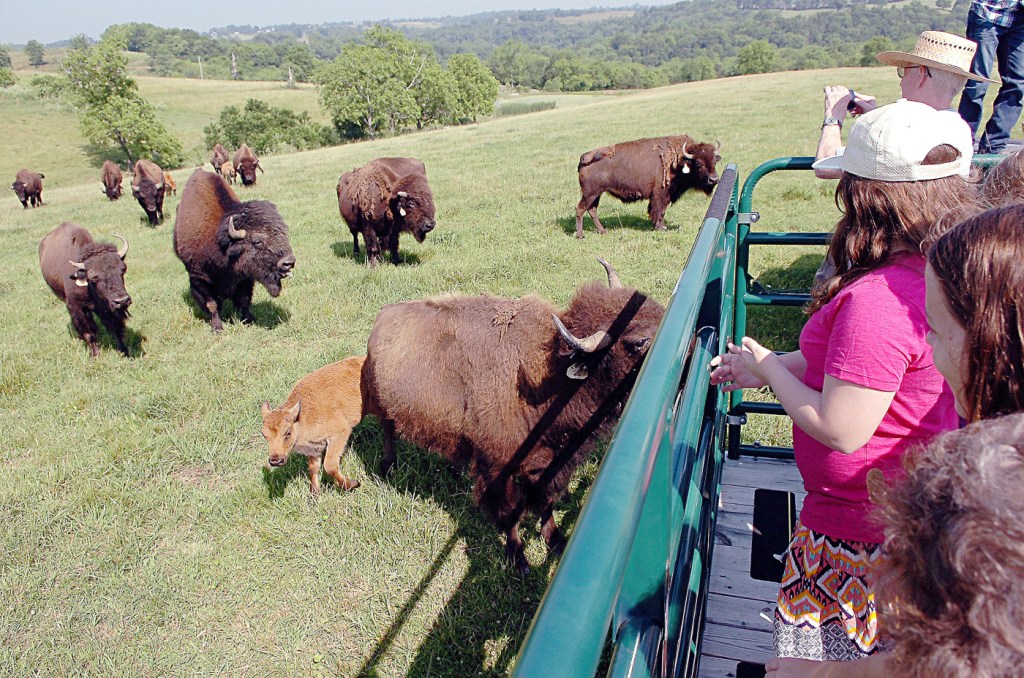 It’s not every day you get the chance to witness first-hand the restoration efforts of an animal that once teetered on extinction. It’s even rarer that you have the opportunity to get face-to-face with one.

You can do just that at Blackfish Bison Ranch, a sprawling 240-acre farm dedicated to raising and preserving the American buffalo operated by Brandeon Hampton in rural Clark County.

Located on Quisenberry Lane off of Boonesboro Road, Blackfish was originally a golf course and hunt club, which featured an archery course.

Hampton operates the ranch with the mission of respecting the animal based on Biblical principles and Native American tradition.

The land at Blackfish was named for Chief Blackfish of the Chillicothe division of the Shawnee tribe.

The buffalo are raised to be “unadulterated,” which means they aren’t bred to achieve a certain color, size or temperament. Rather, they are raised to mimic as closely as possible what they would have been like when they roamed the land freely 200 to 300 years ago.

Tours begin with a lesson from Hampton in a log cabin on the ranch.  Hampton details the history of the American buffalo, its close call with extinction and how private ranches like his own have helped repopulate North America’s largest land mammal.

The story starts in the 1700s when Kentucky was used as hunting grounds primarily by the Shawnee. By 1778, the natives had encountered Daniel Boone and his party. At this time, 70 to 100 million buffalo roamed the landscape.

Hampton said Western expansion through the railroad and colonization narrowed the population to just 5,000 by the 1860s, by 1923, that number would drop to less than 700.

The American buffalo restoration efforts make it possible for people to see in person today an animal that was nearly extinct once.

Guided tours also include an opportunity for visitors to get face-to-face with the animals. Hampton takes groups into the fields with a wagon attached to his beat up truck — thanks to the buffalo getting cozy with the vehicle — where you can feed treats to the massive animals, as he talks about the social structure and natural behaviors of the herd.

Hampton said the largest buffalo at Blackfish is the herd bull, which weighs about 2,200 pounds, stands nearly 7-feet tall and is about 11-feet from his nose to his tail. Visitors feeding the buffalo can expect to be slimed as they wrap their giant tongues around your fingers to retrieve the treats.

Hampton names each of the animals and talks about their individual personalities during the tours, which ends with an opportunity to view, taste and purchase some of the meat.

In addition to sales at the ranch seven days a week, Blackfish Bison Ranch products can be purchased at the Winchester-Clark County Farmers Market and are prepared at Graze Cafe. Blackfish offers filets, rib-eye, ground bison, short ribs and even jerky.

Tours are $9 per person by reservation only.

For more information about Blackfish Bison Ranch or to book a tour, visit the farm’s Facebook page or call 859-808-1285.

— Blackfish Bison Ranch is located at 676 Quisenberry Lane in Winchester.

— Tours are $9 per person by reservation only.

— Meat sales usually begin in June and prices vary on the type of cut, ranging from $8-45 per pound. Some options include ground bison, short ribs, filets, ribeye, brisket and soup bones.