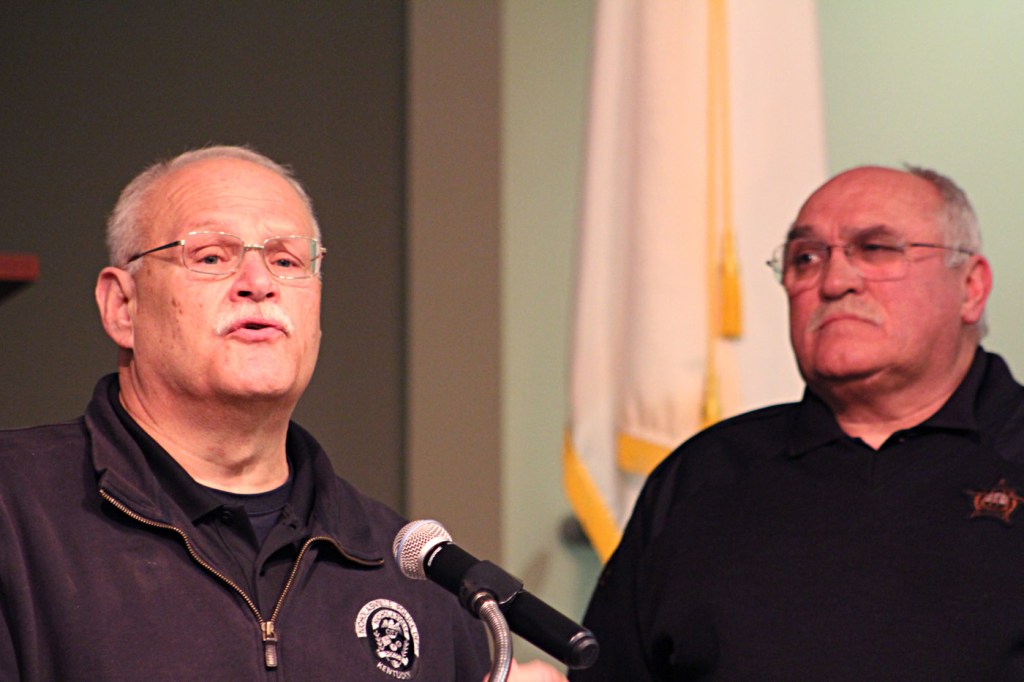 Tuesday evening, members of the Nicholasville City Commission and Jessamine County Fiscal Court, along with key officials of the local government, met with the Wilmore City Council at Wesley Village in Wilmore for a joint workshop meeting. There was a state-of-the-county discussion, and a look into matters affecting Jessamine County as a whole.

Judge Executive David West informed everyone that the Jessamine County Sheriff’s Office and the Nicholasville Police Department had formed a joint task force to combat the drug epidemic that is plaguing the county. The objective of the task force will be to pool resources from both agencies—as well as participation from The Wilmore Police Department—to combat the heroin usage and trafficking that has become rampant across the state and in Jessamine County.

Sheriff Kevin Corman noted that the joint task force has been a long time coming, saying that there have been instances in the past where the efforts of one agency had inadvertently affected an investigation of the other due to unshared intelligence or communication.

“I think everybody in this room either has or knows somebody with a drug problem,” Corman said. “The drug problem probably drives, I’m gonna guess, 70 percent of what Chief Craig, Chief Waldrop and I have to deal with on a daily basis. I saw on the news this morning that the drug epidemic in the United States was the worst in history, and I believe it.”

“What is so sad about it is, probably in Nicholasville, 90 percent of my crime is drug related,” Nicholasville Police Department Chief Barry Waldrop said. “That’s all my thefts, all my burglaries, all my robberies, all my domestics, all my fights, all my bad wrecks. If we can just figure out a way to stop half of it, we reduce crime drastically.”

Sheriff Corman explained how the drug issues in the county have led to a rise in thefts as well. He said that many of those thefts were crimes of convenience for a quick fix, where the perpetrators knew they would get caught. He described some of the programs that the county is doing to help crack down on the thefts, and noted his participation and testifying at hearings in Frankfort on the matter.

Waldrop said that law enforcement had gone after the former drug problem of pill usage and trafficking, and eventually conquered it to a large extent. However, in its place has risen a problem with heroin, which is “three times stronger and three times cheaper.”

Waldrop explained that his officers have now been issued Narcan (Naloxone), which they carry with the goal of saving lives. The main reason, he said, is because it could save them.

He said that the Narcan works on drug dogs as well if they ingest fentanyl.

Waldrop said he never dreamed that they would be up against the kind of “monster” they are up against now, and it is scary because neither law enforcement nor the users know what chemicals are in the product they are taking.

He also said that he had two officers in a Drug Enforcement Agency task force in Lexington, as two of the DEA’s biggest cases in central Kentucky have come out of Nicholasville. He said that when cases get too big for his department, the DEA will come in and take over.

Waldrop said that a big part of the problem has been the influx of dealers and drug runners from Detroit. He said that fourteen such individuals have been arrested in Nicholasville, and Chief Bill Craig in Wilmore had dealt with some there as well.

“These are the ones that really scare me,” Waldrop said. “They have no respect for life whatsoever.” He said that many of the dealers they are dealing with are armed, as well.

In addition, the Nicholasville Police Department is one of 31 law enforcement agencies in the state participating in the BACKUPPS program, which essentially grants statewide jurisdiction to agencies investigations and arrests when combating the drug epidemic.

Jessamine County Attorney Brian Goettl added that the county is unique in its approach to dealing with drug arrests “from the top and from the bottom,” with the rocket dockets, and a special United States Attorney dedicated to prosecuting the drug dealers. He said three dealers are currently being prosecuted, and could potentially be sentenced to twenty years to life.

Also discussed was a drug rehab program created within the Jessamine County Detention Center for incarcerated addicts in January. Sheriff Corman said that with heroin, most of the dealers themselves are addicts.

Jessamine County Emergency Medical Services Director Aaron Stamper spoke for the medical side of the drug epidemic. He said that between July 1, 2016 and February 28 of this year his team responded to 185 overdose calls and administered 252 doses of Narcan. From January 1 to February 28, 2017, they responded to 50 overdose calls. They have been averaging between 25 to 26 overdose calls per month, and while he said those numbers aren’t something they like to see, it is worse in some other places.

He said that his agency spends roughly $1,500 per month on Narcan for overdoses, and that the cost of each dose has gone down for the county roughly $30 from last year. The cost of sending a truck, equipment and crew out to each drug overdose can exceed $200 per call. The estimated toll on the medical supplies budget is $35,000.

“The only drug that we administer now more than Narcan is nitroglycerine spray for cardiac,” Stamper said. To put the drug problem in perspective, he said there was 39 overdoses total in 2011 and 256 in 2016.

“I wish I could stand here and tell you as a medical professional that there is a cure for it and an answer for it, but there’s not,” Stamper said. “Our law enforcement officials are breaking their backs every day. This is not one socioeconomic group of people—this is crossing all boundaries from $500,000 homes to trailer parks to cars in parking lots.”

Stamper said that it is the only drug he has encountered in his career, that when the overdose is reversed, the victim will beg first responders to let them get high again.

Judge West noted that the new $15 to 21 million jail that the county is looking to build may not have to be built if it were not for the drug epidemic and the resulting number of arrests. However, he stressed the importance of looking for ways to help the citizens with drug problems and not just to blame them.

Also discussed at the meeting was the 2017 County Cleanup event from March 25 to April 1. Judge West said that last year, 1,561 tons of garbage was collected, and the total cost of handling and hauling was $112,000.
This year, the county will again offer curbside collection, but both the Wilmore and Nicholasville will only offer drop-off locations for unwanted items to be dropped off for disposal. Items in Nicholasville can be dropped off at the County Road Department, and garbage in Wilmore can be dropped off at 305 West Linden Street.
Another topic discussed was tourism in the county, and replacing the former director who recently vacated the position. Judge West said that the county is looking into combing resources and hiring two individuals to coordinate all events taking place in the county. Tommy Cobb of the Tourism Committee said that the county is at a point that someone needs to be hired to increase efficiency. Cobb talked about how a consolidated promotional effort could pull more tourism dollars to the county. A draft of an ordinance establishing a joint Nicholasville/Wilmore/Jessamine County joint tourism commission and transient room tax was supplied and discussed. Cobb told everyone that it was a kind of tax that everyone is accustomed to paying, and the goal is to turn the income back over and get those who pay to return to the community.
City Clerk of Nicholasville Roberta Warren said that each government would have to review and pass the ordinance individually. It was discussed that representatives from the hospitality industry would have to be involved since that industry is the target of the tax. Judge West said he believes the board should include representation from the county’s restaurant industry and Chamber of Commerce as well.
Judge West also noted that the Work Ready program for the county was being advanced and that agriculture agent Ron Amburgy was no longer with the county. The county’s problem with recycling trailers being filled with non-recyclable items, and the sites around the trailers becoming an unsightly dumping ground, was also discussed. West said that 48 percent of what was put into the trailers was not recyclable, and the extra work of sorting the materials raises the cost of the service.
The news that the county’s EMS agency had achieved platinum status with the American Heart Association was delivered at the meeting as well.
Wilmore Mayor Harold Rainwater proposed that the July Fourth celebration in Wilmore this year be a First Responders Recognition Day. He mentioned other upcoming events, as well as the newly-renovated upper level of City Hall.
He also touched on the nearly $4 million sewer plant renovation project. Furthermore, he hinted at a significant announcement that would come later this week, regarding a new event center in town that he said would be a special addition to Jessamine County.
Nicholasville Mayor Pete Sutherland announced that the city had just been awarded $104,000 with a 20 percent match in design funds for the East Jessamine High School shared use trail, and $112,000 with a 20 percent match for the West High shared use trail. He said that they would work with the transportation cabinet on the contract documents. He said construction is underway on the performance park located on Main Street, and the Brannon Road project.
He mentioned the hiring of Megan Tyson to replace Bill Arvin as Nicholasville’s City Attorney after Arvin’s more than five decades of service in that role. He spoke about the new Nicholasville Farmers’ Market, which will use the ground that the city purchased for a new City Hall site. He also discussed the REACH Alert program, and that there are currently 1,000 residents signed up for.
Finally, Nicholasville Utilities Director Bob Amato updated the crowd on the planned interconnection with the Jessamine South-Elkhorn Water District, which will provide water to more of the county and allow the purchase of water for the city.
A new water main is planned for production from the plant into town in order to increase capacity. He also described plan changes to the sewer system and the recent 20-inch water main break. He mentioned the late County Magistrate Burch Hager’s role in fixing the break. Hager’s service and passing were recognized by everyone at the meeting.
Judge West stressed the importance of communication and collaboration from all three government agencies to solve the problems that Jessamine County is facing before ending the workshop.