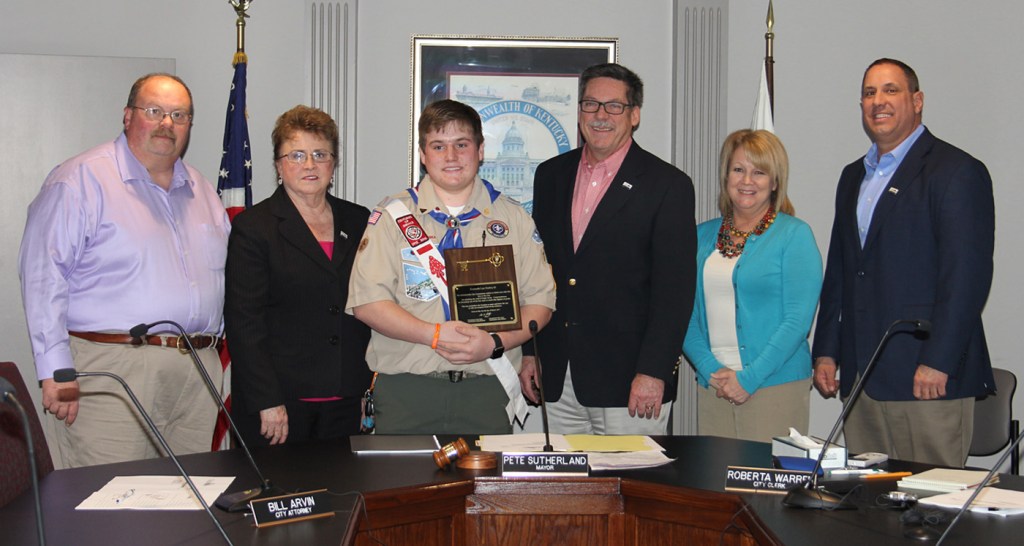 The Nicholasville City Commissioners met for a workshop on Monday evening at City Hall. Among the topics discussed were the location of the new Nicholasville Farmers Market, clean up participation, the new REACH Alert, and measures to reduce costs. No action was taken.

The workshop began with Kenneth “Trey” Lee Embry III, 17, of Nicholasville being awarded the Key To The City by Mayor Pete Sutherland. Embry was awarded his Eagle Scout ranking at his Court of Honor on Feb. 19, 2017. Embry has been a scout since 2010.

The commissioners next heard from Brad Sumeracki, the chairman of the new Nicholasville Farmers’ Market that begins on Saturday, April 29. The market will take place each Saturday from 9 a.m. To 1 p.m. Sumeracki explained that the proposed North Main Street building site for the new City Hall would be a more suitable and sufficient location for the event than the current planned location on North York Street.

The request for a change of site is driven by visibility and space concerns by the participating farmers, artisans and vendors. Also, he explained that it would be easier to control or block off traffic as needed around the event.

Sumeracki was asked about the market’s funding, which will be covered by booth fees and matching grants. Nearly $5,000 has been raised for the project’s launch. The market will operate for its first year under the Nicholasville Food Pantry’s 501(c)(3) nonprofit code. He said that the goal of the market is for most of the vendors on-site to be producers of the goods sold, with the emphasis on fresh foods.

City Attorney Bill Arvin advised that he believed that the committee behind the farmers’ market should have a contractual lease with the city, upon which the commission agreed. Sumeracki said that he would take the request back to the committee. Commissioners discussed the site in its current condition, and the need to clean up the area before the market can begin so that it is aesthetically pleasing on the city’s behalf for visitors at the event.

Look for a full feature on the new Nicholasville Farmers’ Market in the New Year, Healthier You special tabloid in the Jessamine Journal’s March 30 issue.