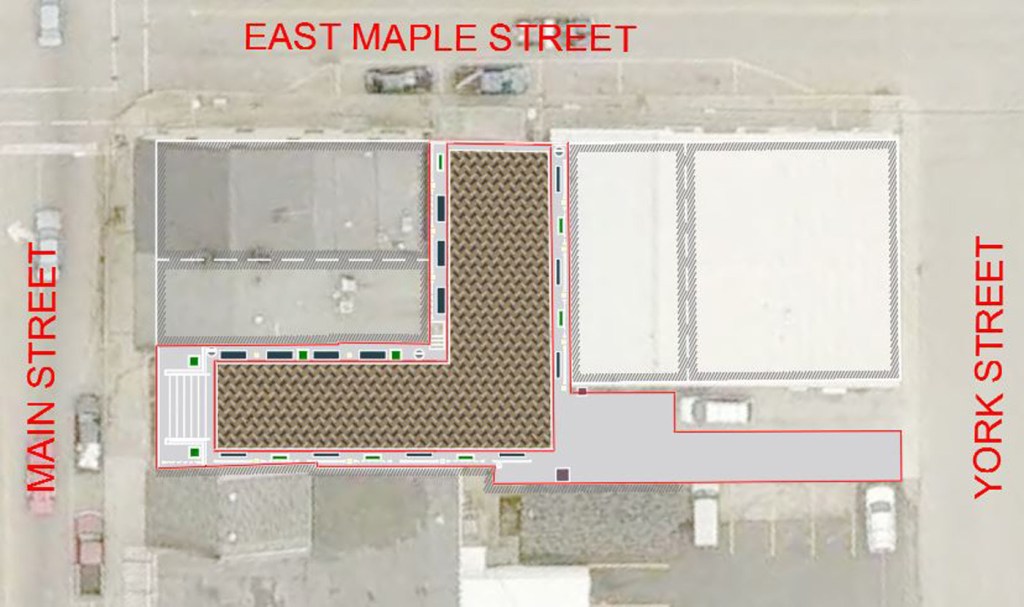 Many downtown travelers may have noticed an empty space where an old barbershop used to be.

The current gap between two downtown buildings has created extra space that is one step closer to making Performance Park a reality.

In 2015, President and Co-Founder of the Creative Art League of Jessamine County, Constance Grayson, approached the Nicholasville City Council and the Jessamine County Fiscal Court with the idea to transform the vacant lot, located at 104 S. Main St., into an area that could be used for art events, shows and musical performances.

The lot at 104 S. Main Street was purchased and donated to the city by Clay Corman in 2015.

The Kentucky Transportation Cabinet allowed the city to use leftover funding, about $280,000, from a previous downtown Street Scape project for the performance area.

Banks Engineering, a civil engineering firm in Jessamine County, was chosen to out the beauty in the vacant lot.

The project’s estimated deadline — originally expected to be August 2016 — was pushed back a year due to a commercial purchase contract for 104 E. Maple St. — the former barbershop.

Steinmetz said there is a possibility the city will be able to lower some of the cost by using their own people.

“We’re still talking to the city,” he said. “It’s to be determined, but it’s going to determined really soon,”

He said he would like to have the project completely done by October due to some events awaiting the arrival of the park.

Phase one will consist of improving the space located on 104 S. Main Street. This includes the installment of benches, lighting, decorative panels, and stairs that would lead from Main Street into the park.

Phase two includes the enhancement of the property on 104 Maple Street. The additions to the empty space would also include benches, lighting and planters.

Both phases would also have security lighting as well as brick pavers that will reduce the storm water runoff.

The center of the ‘L’ will have electrical receptacles for situations that would need them, such as a band playing at an event.

“The main focus of action would be in the center of the L,” Steinmetz said.

The entrance to the park from York Street will be paved with concrete, due to the potential heavy traffic of vehicles such as delivery trucks.

The project is currently out to bid, and the final bids will be received on March 17. Steinmetz said the company is hoping to begin working on the park in April.

“Hopefully the whole project will be done by this fall,” he said.