Community strives to assist family of baby with Osteopetrosis 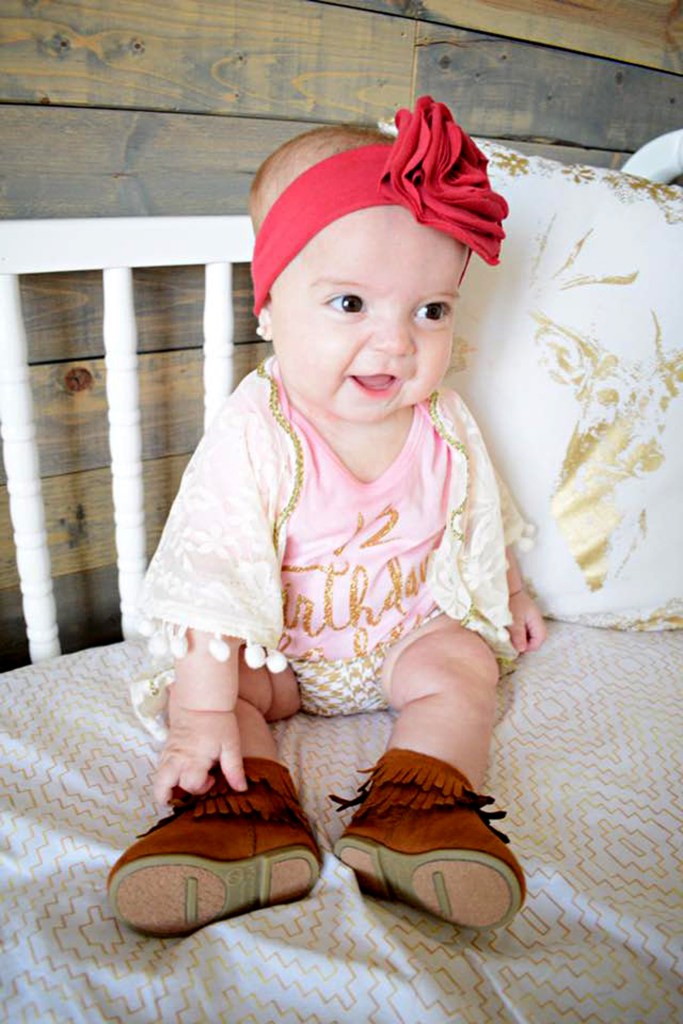 A vendors market was hosted at the Jessamine County Fire Station this past Sunday for a Nicholasville family who has spent quite a bit of time in the hospital over the past few months.

Vendors such as Tastefully Simple, Mary Kay, Plunder, LuLaRoe, ADOORably Yours and Premier Designs gathered at the fire station to raise money for the family of Remy Vanderpool.

Remy, a 10-month-old, was diagnosed with Osteopetrosis — a rare bone disorder that causes increased bone density, brittle bones, and, in some cases, skeletal abnormalities as well as a shorter life expectancy — on Dec. 22, 2016, at Shriners Hospital for Children in Lexington.

Remy’s mother, Roxanne Vanderpool, had taken her to the doctor over concerns about developmental delays and stiffness.

“Initially, we just thought it was going to be something that had maybe been torn at birth,” Roxanne said.

The doctor at Shriners Hospital told the family that Remy — who was 8 months old at the time — may have Osteopetrosis. He recommended that they take her to Cincinnati Children’s Hospital Medical Center.

“He said it was rare and it could be life-threatening, and we needed to get her somewhere quick,” Roxanne said.

That same night, through various X-Rays and testing, Cincinnati Children’s hospital confirmed the family’s fears, Remy had Malignant Infantile Osteopetrosis. Roxanne said most children with the disease do not get diagnosed until they go blind, due to optic nerves damage.

“Luckily we caught this way before that,” she said.

The only way Remy would have a chance for a normal life would be to receive a bone marrow transplant.

“It was the worst day of our lives,” Roxanne said. “It took our breath away to hear that if our child did not have this treatment she could die at two.”

Within a month of being diagnosed, on Jan. 22, Remy was admitted to Cincinnati Children’s Hospital. To prepare for her for the bone marrow transplant, she had to go through 10 days of chemotherapy.

“That was really rough to see her go through that,” Roxanne said.

On Feb. 22, Remy received the bone marrow transplant from a male international donor.

After looking through the national registry, a 12 out of 12 perfect donor match was found for Remy. Roxanne said after a year or two, the family will get the chance to thank the person who played a role in providing Remy with a normal life.

“We just can’t wait to do that,” Roxanne said. “To maybe meet this person one day.”

Before the procedure, Corey, Roxanne and Remy’s big sister, two-year-old Charlee, packed up their necessities and moved to an apartment in Cincinnati so they could be with Remy.

On Monday, the family found out she is 100 percent engrafted, meaning so far the bone marrow transplant has worked, and the cells being produced are good ones from the donor’s bone marrow.

“She has just defied odds up here with how quickly she’s recovered,” Roxanne said.

She said the doctor is hoping Remy can be discharged in the next week to stay in the apartment in Cincinnati. It will likely be another six months before the family can return to their home in Nicholasville.

In order to be with Remy during her hospital stay, Roxanne and Corey, both nurses, have missed work.

The family has already encountered some financial hardship due to the ever-growing medical expenses.

Remy’s diagnosis came only a few weeks after her father Corey was able to hold her again.

In June 2016, Corey discovered he had Crohn’s Disease — a chronic inflammatory disease of the digestive tract. Over six months, he would have to endure several surgeries. He was just getting ready to go back to work when Remy was diagnosed.

“We were thinking our life was about to normalize,” Roxanne said.

The community has rallied around the family by conducting various fundraisers like the vendors market such as Pearls for Remy, which was hosted by Mandy Sallee throughout the month of February and almost $20,000 has been raised on the family’s GoFundMe page. T-Shirts that display #remystrong are also being sold to raise money.

She said the family is so thankful that the community has come together for them so that they can devote all their time and energy to getting Remy better.

“She’s stronger than I could ever be,” Roxanne said.