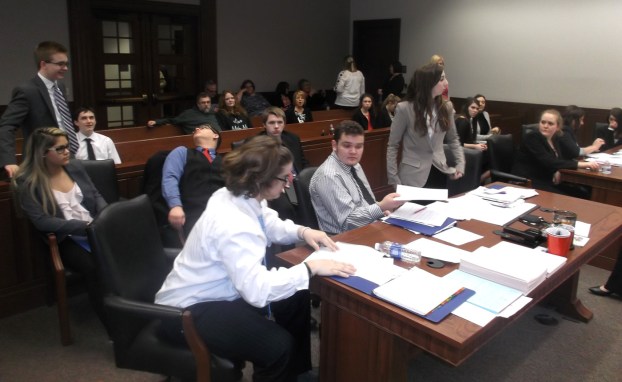 Photo provided by Will Hall

Twelve students from various classes and grades at Jessamine Career and Technology Center have been preparing to go to court since the beginning of February.

The case, created for the 2017 Kentucky High School Mock Trial Tournament, consists of one set of parents suing another set of parents because their child was shot and killed by the other parent’s child while they were left alone.

“We’re not debating the damages, we’re just debating which parent is at fault,” said Will W. Hall, a law and public safety teacher at Jessamine Career and Technology Center.

During the two-day competition, the team will be going up against other teams from various high schools throughout the state.

This is the third year JCTC has participated in the Kentucky High School Mock Trial Tournament.

Though in previous years the JCTC teams did not place in the tournament, Hall said they did learn a lot and he has confidence in this year’s team.

“This year, we’re definitely the best that we’ve been,” he said.

At the moment, the team has been practicing whenever they have time. There have been no dedicated after-school practices. That is something Hall said he is hoping to change next year.

Each attorney will get to examine and cross-examine a witness.

Hall said when the students are examining a witness, they are trying to bring their side of the case out by asking their own witnesses non-leading and open-ended questions. When they are cross-examining a witness, the student portraying the attorney will ask the opponent’s witnesses leading questions to try to trap them and further prove their point of view is right.

When the students enter the courtroom on competition day, actual trial rules apply. Hall said the students are not just debating a legal issue, they are bound to act as an actual attorney would in an authentic courtroom setting.

“Real attorneys and real judges are going to be the ones judging the trial,” Hall said.

Individual participants will be scored on a scale of 1 to 10 points — a 5 being average — according to their roles in the trial. The scoring judge is scoring individual performances in each category. The scoring judge is not scoring the legal merits of the case, according to the Kentucky High School Mock Trial Tournament explanation of the performance ratings used on the score sheet.

Students from JCTC will be competing in the mock trial tournament at Eastern Kentucky University on March 3 and at the Lexington District and Circuit Courthouses on March 4.

Gabrielle Spicer, a senior at West Jessamine High School, has been on the team for a year. Spicer will be portraying a witness in the mock trial, she said she is excited about learning from and competing against the other teams.

“This is my first time doing this and I enjoy it,” she said.

A church in Nicholasville celebrated its 200th birthday on Sunday, Feb. 19. Providence Baptist Church was formed in March of... read more