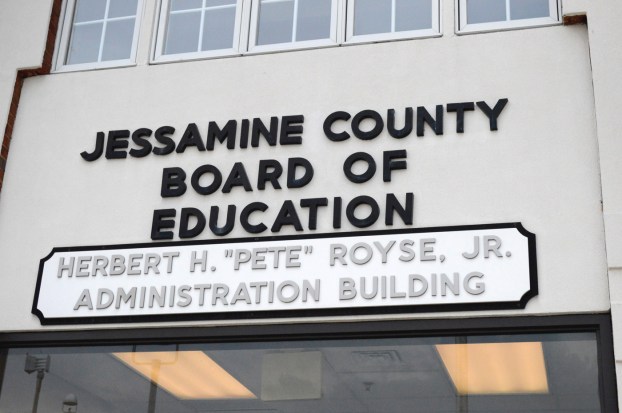 The Jessamine County School Board discussed many options at a working session on Monday night to counteract some potential long-term and short-term challenges facing elementary schools in the district.

Over a five year period, Nicholasville Elementary is projected to go from approximately 570 students to about 460, said Val Gallutia, assistant superintendent and chief operations officer of Jessamine County Schools.

Gallutia said there is a downward trend, mostly because at the moment there are no new kids coming into that attendance area.

“We can’t continue to go down that pattern,” Gallutia said.

Currently, Rosenwald-Dunbar faces an opposite challenge. The school building with a capacity to hold 620 students has an enrollment of approximately 670 — 340 of them are on free and reduced lunch.

Time is not expected to relieve the overcrowding, as the school is projected to have 645 students in the next school year.

Another concern for RDES is that it has a fast growing subdivision — Brannon Crossing — within its attendance boundary. This subdivision could cause enrollment to increase even more.

Gallutia recommended the board put a threshold on the number of students enrolled in the schools based on the capacity of the buildings.

The threshold would allow administration to put a cap on the number of students who are not within the attendance boundary.

Currently, RDES has 60 students attending the school who do not live within the attendance boundary, Gallutia said. Five of the students are using the hardship option, 29 are using the childcare option and 26 are using the employee option.

“We may have to make those tough decisions,” Gallutia said.

A grandfathering clause, similar to the one that was implemented during the last major redistricting four years ago, would be implemented.

If something is not done soon to decrease the overcrowding at Rosenwald-Dunbar, the school district would eventually have to bring in temporary classrooms for the school, Gallutia said.

The extra trailers can cost upward of $20,000 per trailer per month.

The school board discussed three different options for spot redistricting to alleviate some of the overcrowding at Rosenwald-Dunbar.

Option one affected the fewest number of students, but it did not do as much to address the concerns.

“It would bring Rosenwald-Dunbar down, but it would still keep them close to that edge where the principals would have to make some difficult decisions,” Gallutia said.

Options two and three were the proposals most heavily discussed.

This would cause the population at Brookside — a school building with the capacity to hold 630 students — to go from an estimated 523 students to 573. In turn, RDES was estimated to decrease by about 76 students.

Option three would affect every elementary school in the district. This proposal would address concerns with both RDES and Nicholasville Elementary, Gallutia said. It would also help to balance enrollment numbers and free and reduced lunch numbers at all the elementary schools.

However, it would also impact the most students. A total of 471 elementary students would be affected by this option.

“It is a huge undertaking if you want to look at what this impacts,” Gallutia said.

Though the third option would be the most long-term resolution for the elementary schools, it would also displace the greatest number of students.

Board member John Branscum suggested the possibility of implementing option one or two, and doing option three in phases over a period of time.

Superintendent Kathy Fields said the board needs to make a decision soon, because it will affect staffing allocations — based on enrollment numbers — that are due next month.

“We have to move on this by March or we’re going to have a domino effect on staffing,” Fields said.

No decisions were made and no actions have been taken on the proposed options. The matter will be further discussed at the next meeting at 6 p.m. on Feb. 27.

Gallutia said the board leaned toward option two the most, so he will be bringing a recommendation for that proposal to the next meeting. Staffing allotments based on option two, along with the recommendation of a threshold on the number of students at each school, will also be discussed in that presentation.

For more information on spot redistricting or to give feedback, visit the Jessamine County Schools website at http://www.jessamine.kyschools.us/