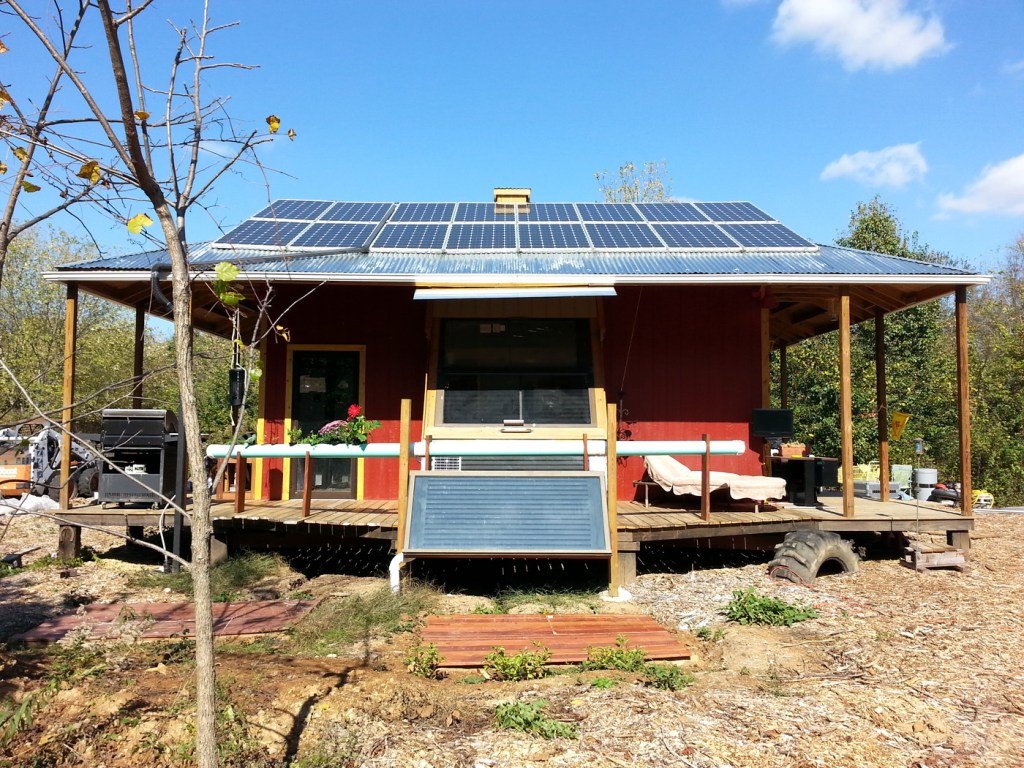 While some are content paying the regular monthly bills such as water and electric that come with owning a home, some seek a more independent alternative.

Jay Hamilton, a Jessamine County native who has a background in supply chain management, began looking into how houses were built when he was 20 years old.

Prior to building for his company, Renegade, he built furniture as a hobby.

Hamilton watched “Garbage Warrior,” a documentary that follows an architect who builds environmentally-conscious “Earthship” houses. The structures are built almost entirely from discarded materials including tires and aluminum cans. He described the documentary as a “religious experience.”

“That movie changed my life,” Hamilton said. “It changed the way I looked at everything.”

Originally, Hamilton said he had a seven-year plan to build his own “Earthship” home, but some occurrences in his life caused him to need a place to live much sooner than that. Now at age 38, Hamilton has taken some of his inspiration from the documentary and built his own self-sustaining and off-grid home, which he has lived in for over a year.

The “Work Shop” he currently lives in is a prototype. He started by building the structure, then adding features onto it as he went. The house has gone through various design changes to perfect and improve each feature such as the plumbing, water collection and lighting.

Hamilton said one of his favorite features is the convertible greenhouse, which is an 8-and-a-half foot by 12-foot window. The window easily opens up and allows natural air and sunlight to flow into the living space. It also allows more room for guests in the 500 square foot home.

Hamilton said he also enjoys the “Castle in the Sky” feature, which includes a storable couch that can be built in the ceiling of the house in less than five minutes. The seating goes along with a projector and screen that is stored in the ceiling creating a 100-inch movie theater.

Hamilton’s “Work Shop” is a part of a larger Renegade Project consisting of four other larger and smaller homes. One of the smaller homes, “The Dagger,” can be installed within 24 hours.

Though the homes vary in cost, features and sizes, each one is intended to provide independence.

“This home is a home for free people,” Hamilton said.

He said many in society have become slaves to their homes because they have to pay bills such as electric, water and utilities each month. A Renegade doesn’t have those repeating expenses.

“You could live off yourself,” he said.

One thing that makes the house independent is the four different types of gardens that can be added to the wrap-around porch. A 22-foot Hydroponic garden comes standard with each kit, but optional features include a waterfall garden, aeroponic cloner and mushroom-growing trays underneath the porch. Hamilton said all four options allow homeowners to grow pretty much any plant they want, which means most of the resident’s plant calories, could be grown on site.

“If you can grow your calories you don’t need money,” Hamilton said.

The standard home also holds a total of 740 gallons of water, which is purified using an ultraviolet light treatment that is intended to kill bacteria that will make consumers sick.

The roof of the “Work Shop” house boasts 6 kilowatts of solar panels that provide the energy to power items in the home, such as lights and appliances. They also power the energy efficient air conditioning units, which was one of the big puzzle pieces to make the home independent from an electric bill, Hamilton said.

He said the only small drawbacks he has encountered in his 18 months of living in the house is that he has to be mindful of showers. If he takes a hot shower at night, he will not have a hot shower in the morning due to lack of sun to power the solar water heater. But, he said that issue could be fixed by installing a gas water heater in the home.

Each house also comes standard with a computer that gathers an open-source online currency called bitcoins. The eight terrahash bitcoin miner collects any extra energy in the batteries that are fueled by the solar panels and monetizes by using it to mine for bitcoins. The computer can be upgraded to 12 terrahashes for an extra cost.

The “Work Shop” gathers one to one-and-a-half bitcoins a year. At the moment that translates to around $1,000.

“It’s probably the only house that pays you to live in it,” Hamilton said.

On Monday, Hamilton’s Renegade homes became available on Kickstarter. They can be purchased as a do-it-yourself kit, or Renegade will come build it for you.

The basic bare minimum kit for the “Work Shop,” which includes features such as two bedrooms, a kitchen, a bathroom, a living room, a solar water heater, appliances, solar panels, nickel-iron batteries that provide 600 amp hours at 48 volts, and an optional washer and dryer costs $48,997. Hamilton said one person could build the home by themselves in less than a year. Or the company could build it for them in a month or less for $74,997.

“There are cars that cost more than this house,” Hamilton said.

Renegade will be filling orders for six houses this year, and two preorders have already been made.

Hamilton said Renegade homeowners are able to retire as early as they please by changing a few lifestyle habits such as growing their own food and being mindful of conserving water and energy.

“When your home is free, all your income becomes disposable,” he said. “Your home takes care of everything, all you have to do is wake up.”