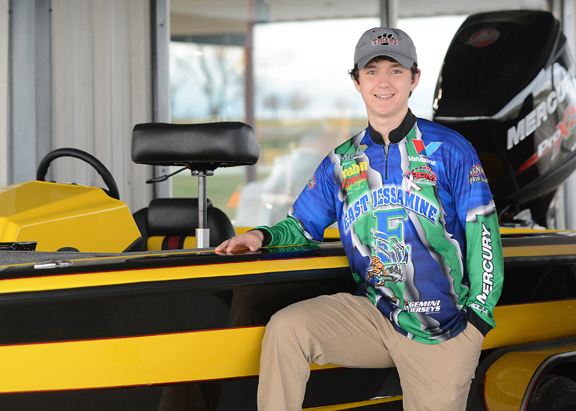 East’s Lasley taking it to the next level

It’s his work on the school’s bass fishing team that earned him a scholarship to Campbellsville University.

Chris signed with the Tigers last Tuesday surrounded by his immediate family and with many of his friends.

Possibly more excited about the signing and, no doubt, the scholarship was Chris’ father, Everett.

“I’m super excited,” he said. “I’m more excited about him getting a fishing scholarship than I would have been had he got a baseball scholarship.”

The Lasleys own a fishing boat but, from the sound of it, Everett doesn’t get to see it all that often,

“I’m very excited to have Chris join us,” Hall said. “He’s going to be a great asset for us. Chris has a great work ethic, and I can see he really enjoys the sport and has a passion for it.”

Hall doesn’t just look for a great angler, his team is made up of good students.

“No. 1, I want to see academically what kind of kid I’ve got.  If he is making grades then I know he is going to have a good work ethic and my kids are going to have to keep a good GPA in order to be able to travel and participate.”  Lasley should have no issue with that aspect as he currently boasts a 3.7 GPA.

Chris is looking forward to joining the Tigers angling team and stated that Campbellsville was always high on his list of possible colleges.  While being able to fish many different styles Chris, like most anglers, has his favorite technique, “My favorite method is flipping, which is slow fishing” he commented, “I can power fish alright but my favorite is flipping.”

Collegiate angling is virtually year round so Lasley will have to forego any thoughts of pursuing a baseball career after graduating high school but that did not seem to worry him too much.  The Tigers will participate in many tournaments throughout the school year and in doing so will travel to many states such as Florida, Oklahoma, Illinois and Alabama as well as some of the better known lakes here in Kentucky.   In the winter when the tournament season slows to a trickle the team will be out doing shows at places such as Angler’s Outpost with sponsors to help promote products that they aid the team with.

Practice time for the Tigers can be an interesting adventure as they usually have to share the waters with the general public.  As in tournaments, no angler is guaranteed a spot on the water so it is usually the first boat to find a spot that  claims it.  This is also true when out on the local lakes practicing.  Hall smiled while describing the hazards of tournament fishing, “Everybody’s on an equal playing field,” he stated, “everybody’s got to deal with the houseboats or the jet skis and the elements that the good Lord brings down on you, a stiff rain and wind (for example).  So it’s an every man for himself kind of thing.”

When asked what lakes he likes to fish within the state Chris mentioned Lake Herrington without a second thought.  “Herrington is probably my favorite,” he said with a smile, probably remembering some of the fish he’s pulled out of its waters, “but Cumberland is up there as well.”

Lasley has been fishing almost since the day he could walk and his Dad proudly tells the story of a photo he has on his wall of Chris posing with a two and a half pound bass he had caught … at the age of three!  Lasley will be no stranger to tournament fishing.  Not only has he been a huge asset to East Jessamine’s angling team, he has been competing against adults since the age of 14.  Because of that experience he understands the whole tournament cycle, the procedures and the rules of the sport and, in addition, he already knows many of the lakes.

Chris mentioned that his biggest bass to date weighed in at six and a half pounds, no doubt a resident of one of those two lakes he likes to visit so much.

By Dave Redden sports@jessaminejournal.com Like most high school seniors, East Jessamine’s Kyle Gann has a plan for the future. He... read more