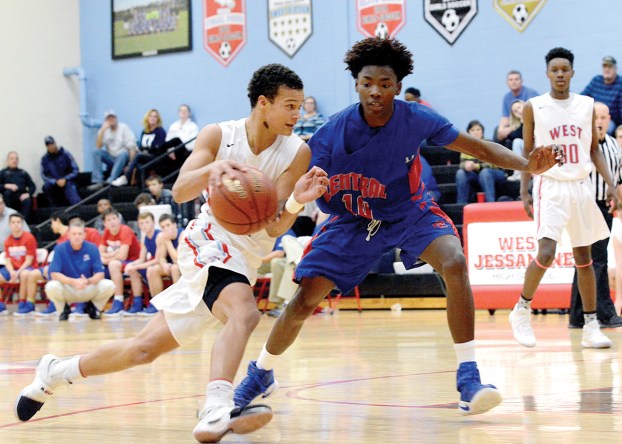 Madison Central came to town with their 9-11 record and left with a convincing 69-53 victory.

The Indians jumped out to an 11-0 lead and it wasn’t until the 5:24 mark of the first quarter that the Colts troubled the scorekeeper, Joseph Gilbert opening the scoring for the hosts.

To their credit the Colts were not willing to lay down and roll over as they scrapped and pressured Madison Central, slowly clawing their way back on the scoreboard.  By the 4:26 mark of the second period, the Colts were within one point at 27-26.  Unfortunately, that would be the closest they would get to the Indians.

Madison Central’s was led by their sophomore center, Isaiah Cozart, at 6-foot-8 by far the tallest player on the court Tuesday night.  He scored 20 points, pulled down 16 rebounds and registered 6 blocked shots. He was well supported by Dustin Gerald who also gathered 20 points and 15 rebounds.

Colts’ coach, Damon Kelley was under no misconceptions as to why his team struggled against the Indians.

“We had a disadvantage against them in terms of size,” Kelley said. “But we didn’t play like we recognize the fundamentals of the game that you have to be better at to overcome that. We had opportunities to get Cozart off his feet and maybe draw some fouls on him but we didn’t capitalize on them.”

Madison Central scored steadily throughout the game while West Jessamine had a slow opening and an under par third quarter, which proved to be the Colts’ downfall.

Kelley recognized the hustle from his team.

“My guys play hard, it’s not a question of effort but we make the game more difficult than we need to,” he said.

West had two regular starters missing from their lineup.  Sophomore guard, Dalton Bruner was sidelined with illness while senior forward Bradley Tullar still had not passed the concussion protocol after an injury sustained in an earlier game.  Both players are in the club’s top five in scoring and are expected back for the postseason, but Kelley would not blame the defeat on the lack of those players.

“We’re asking some guys to play more minutes than they are used to because we are down two very important players,” Kelley said. “But that’s an opportunity for other guys to step up and show that they deserve to get more minutes for themselves and make it tougher on the guys when they are able to come back to get their minutes back up there. I think some of the guys have done that.”

Isaiah Okesson paced the Colts with 18 points. Kendall Peters chipped in with 16 as only two Colts to reach double figures.

West travels to Mercer County on Friday, January 20 for a huge district matchup. Tip is slated for 7.30pm.

Dave Redden sports@jessaminejournal.com LEXINGTON — Some basketball clubs enter Christmas tournaments to try to win them, others will head for... read more