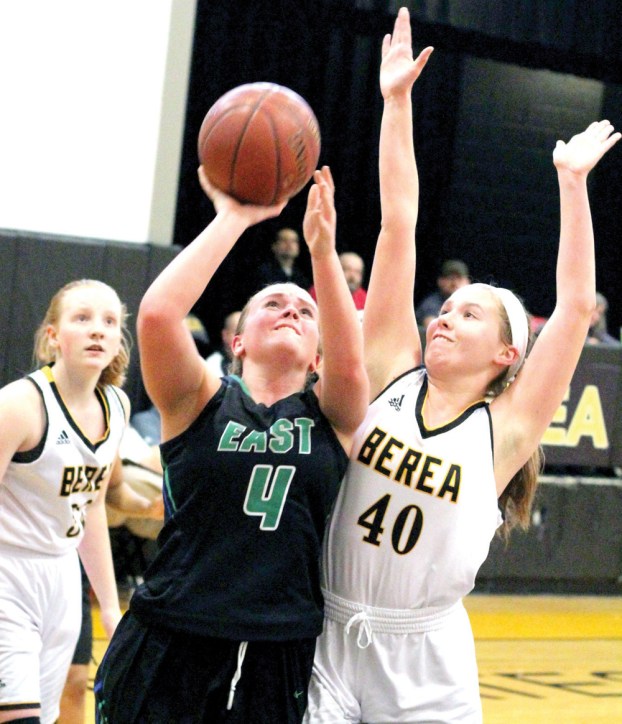 BEREA — Continuing to show improvements, the young and inexperienced East Jessamine High School girls basketball team put up the its highest point total all season in a disappointing 71-57 defeat on the road at Berea.

East outscored the host team over the final 18 minutes of the contest, including 32-28 in the second half. But a horrid performance before the intermission, which saw the Jags trail by as many as 20 points, was too much to overcome.

“If we played in the first half like we played in the second half, we would have been in good shape and probably had a good chance of winning it down the stretch,” East Jessamine coach Todd Claunch said. “But it was a quarter and a half before we ever started to get any intensity on defense and started guarding people.”

East had trouble putting the ball in the hole early and found itself trailing 6-0 before finally getting on the board when freshman Paige Smith hit a short jumper from the corner.

Trailing 11-4 with three minutest left in the first, junior Jalynn Landversicht hit a running jumper in the lane, and sophomore Jasmine Atkerson added a pair of jumpers to keep East Jessamine close.

On the strength of six straight points by Smith in a 55-second span, East Jessamine was still hanging tough, trailing by only eight, 27-19 with four minutes remainig in the half.

But this is where the wheels fell off for the Jags, who were outscored 12-0 over the next three minutes on the way to a 42-25 halftime deficit.

East matched Berea point-for-point for most of the third quarter. Highlights for the Jaguars were a pair of 3-pointers from Atkerson and five points from Landversicht.

Not giving up, East Jessamine continued to chip away at the lead over the final eight minutes. Six different players contributed points for the Jags down the stretch.

While giving his team credit for effort and playing hard all the way to to the final buzzer, Claunch was puzzled by his team’s dismal performance from the charity stripe. East Jessamine hit only 12-of-23 from the free-throw line, missing the front end of multiple bonus situations.

“Tonight, unfortunately, the players that had been making them were missing them,” he said. “And that’s never a good sign.”

The loss was the 13th in a row for the Lady Jags, who return just one starter from a year ago. But the 57-point offensive output was a sure sign of progress, according to Landversicht, who is quick to point out that the improvement comes from a lot of hard work and the players keeping a positive attitude and not getting down during the rough times.

“I see us improving a lot in our mentality,” she said. “Nobody wants to lose as many games as we have. But the girls are staying positive and working hard.  In practice we are really getting after it. And you can see some of the girls starting to step up in their roles. We’re getting a lot more players into the flow of it.”

Landversicht led a balanced scoring attack for the Jaguars with 16 points. She was followed by Smith with 14 and Atkerson with 12 to give East Jessamine three players in double figures. Taliyah Colone had one of her better games of the season with six points, followed by Jessica Hall with five, and Autum Harrison and Aimee Hagins with two apiece.

East Jessamine dominated the junior varsity action, jumping out to an early 19-2 lead in the first quarter, stretching it to 37-2 at the half, and 41-3 after three on the way to a 51-9 win over the host team.

Marceli Parisi, I. Hagins and Erin Mitchell contibuted seven each for the winners, followed by McClain with five, Taliyah Colone four, and Precious Jackson one.