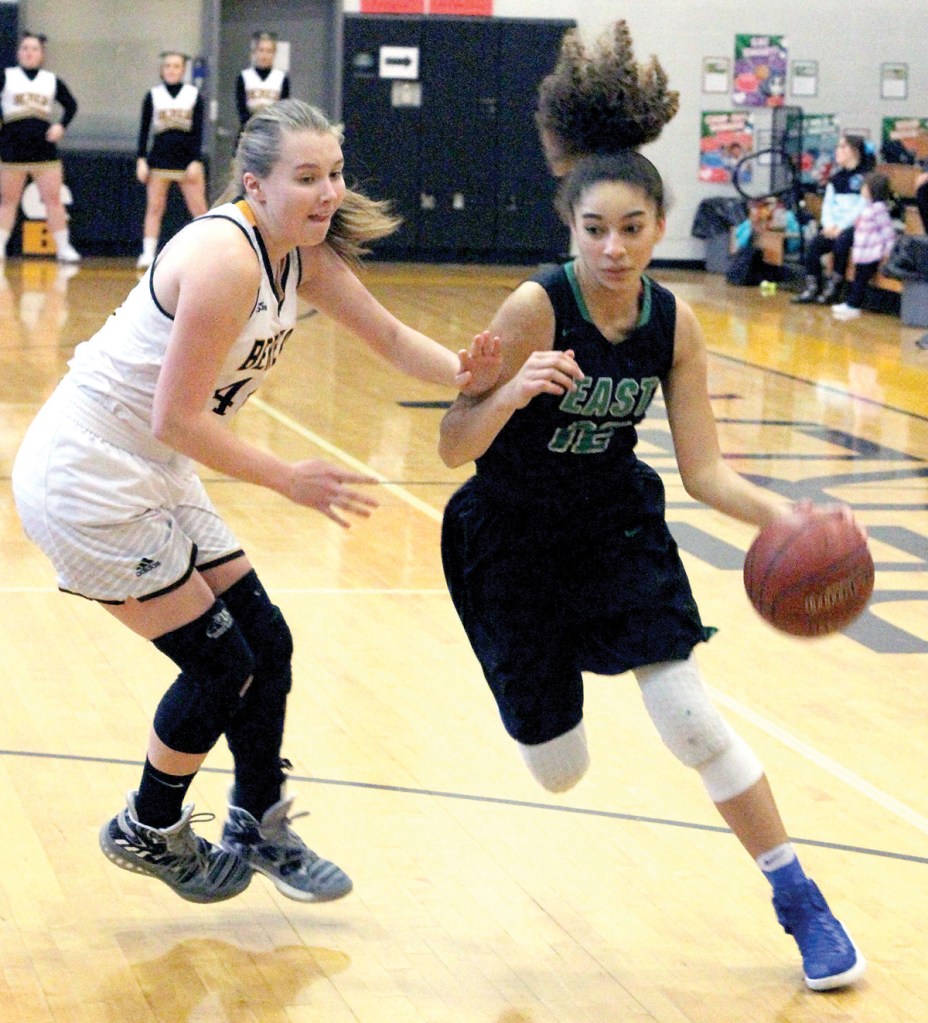 She’s not sure where she sees herself 20 years from now. But East Jessamine’s Jalynn Landversicht is very clear about where she wants to be in the not-too-distant future. And that destination is summed up best in her own words.

“I play basketball. That’s really all I do. I play it year-round and always get after it hard,” she said. “I’m working for a dream.”

And that dream, as you may have guessed, is lacing up her sneakers well after her high school playing days are over as a member of a college basketball program.

That dream wasn’t always in the stars.

Landversicht’s first sport was soccer. Even as a young player, she had a strong leg and could kick the ball well for her age. She was likely a star in the making.

But it was a chance encounter at the beginning of her sixth-grade year with a middle school basketball coach Paul Bingham that set in motion the hoops career of one of the 12th Region’s top talents. Landversicht remembers that first meeting with Bingham well.

“I walked past this man who said ,‘Hey’ and then he asked if I had ever thought about playing basketball,” she said. “Of course I had not, but I was open to the idea. So he talked me into trying out for the team. I came home and talked to my dad about it and, of course, he was all for it.”

And while it was that meeting with Bingham that got the ball rolling, it was the bond that developed between the two that helps drive her today. Landversicht, who possesses a work ethic considered second to none among her peers, uses the unexpected passing of her former mentor in 2013 as motivation.

“When he passed, I kept telling myself I wanted to be great and say he is the one who started it all for me,” Landversicht said. “And that helps a lot and keeps me going even when I start to get down on myself.”

Not getting her first taste of basketball until the sixth grade did undoubtedly set Landversicht back in her development. But her desire to do well, combined with an impressive skill set, has allowed her to catch up quickly.

“Jalynn goes hard. She is very motivated and committed. Not only to her team but to herself also,” East Jessamine Coach Todd Claunch said. “She is very skilled and she works hard on her game. She’s very coachable. She’s not a player that you have to tell what we need to be doing and you don’t have to show her multiple times. She’s one of those players you want in every group. When you have somebody like her you can always build a team around them.”

While she is recognized as one of the region’s top performers, it has not come easy and hasn’t happened without plenty of challenges. Her most recent hurdle to overcome is the move from playing post to running the show as the Lady Jaguars’ starting point guard.

The move was prompted by the graduation of several key players, and the need for Landversicht’s skills on the perimeter for a young and inexperienced team. And just as Claunch expected, Landversicht has taken to the job like a natural.

“I can’t imagine any player I’ve ever coached being able to go from a post player to running the point and doing as well as she has in such a short period of time,” he said. “That’s something you normally have to start at a real young age.”

Currently, the junior is averaging around 14 points per game to go with team-highs of six rebounds and four assists per contest. She also averages two steals per game for the Jaguars.

With stats that either lead the team or are near the top in every category, one could get the impression she is selfish player. But that could not be further from the truth, Claunch said. His star player is too unselfish most times despite having the green light every trip down the floor.

“She is not selfish enough for me, nor for her teammates,” he said. “I think her teammates would be the first to tell her that they would like to see her be a little more selfish. But her unselfishness is a great problem to have. I would much rather have to ask her to take more shots than to have to ask her to back off and take less.”

Landversicht is not just a top talent on the hardwood, she is also a leader in her school and a good, positive role model in her community.

“She is a top notch student,” said Claunch. “She’s a very talented young lady who sees the big picture and is looking ahead to where she wants to be and how to get there. She has everything lined up to get to where she wants to be. She really has it all together. And she is also a very caring person when it comes to her family, teammates and classmates. She is one of those students that every teacher loves to have. She is really one of the prides of our school.”

With so many positives as both a person and player, Landversicht is a shoe-in for success, according to her coach. He sees her as a player who is going to attract a lot of attention from coaches at the next level.

Landversicht has already had contact with a lot of top programs, which is proven by her shoebox full of letters from college coaches, including Kentucky, Ohio State, Kansas, Florida and Vanderbilt among others.

And it should come as no surprise the Kentucky Hoops team from just down the road in Lexington are a preferred choice, not just from Landversicht, but from her family as well. And while she understands that dream is very much an uphill battle, it’s a fight she welcomes.

Does she have the potential to reach such a lofty goal? Coach Claunch answers without blinking an eye, pointing to her near six-foot height as a major plus.

“There’s no doubt about it,” he said. “She has a lot of things in her game that coaches can’t teach. She has the length, the size and a great work ethic.”

And while the future is bright for Landversicht, she is able to keep herself grounded knowing nothing will ever come easy. But with the support of her family, including her dad Kurt, she has what she considers a support system that will not allow her to fail.

“Of course my dad is great and helps out a lot,” she said. “He’s been a big inspiration for me. He’s always supporting me, giving me tips, and of course he takes care of the financial side of it.”

A fine player in his own right, Kurt still shows the younger Landversicht a thing or two from his glory days. Jalynn is not overly impressed.

“He tries sometimes, but he’s getting old,” Jalynn joked. “So, I make sure to tease him and let him know he can’t keep up.”