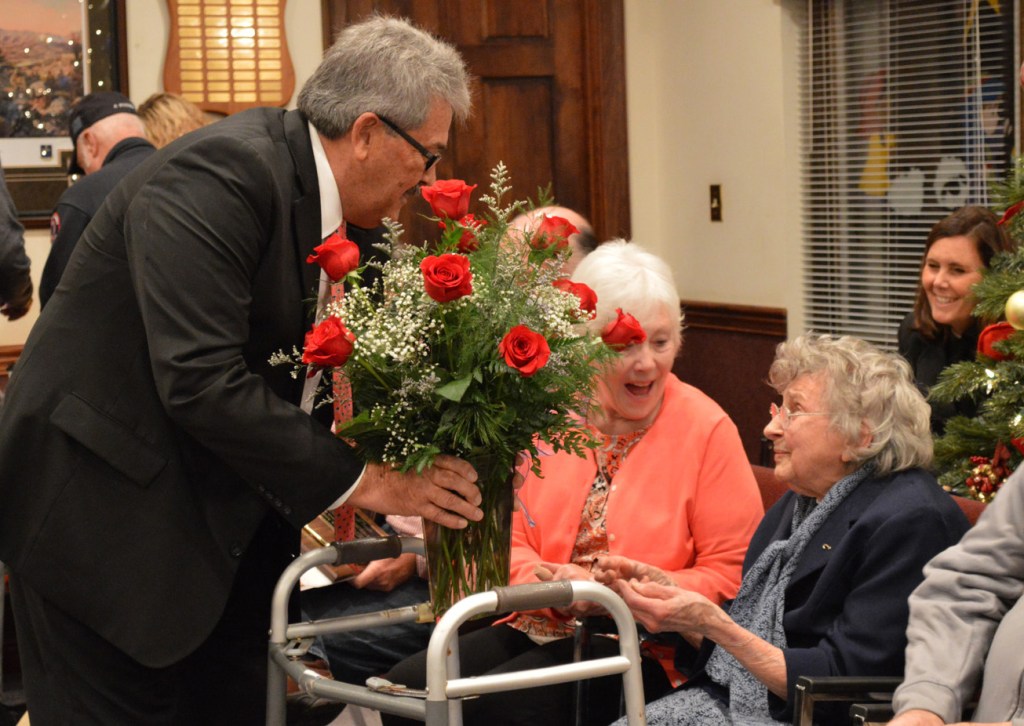 A few days after many of us celebrated the new year, one woman celebrated living a centuries’ worth of them.

A few others in Wilmore have been honored for reaching the 100-year mark, however, Mitchelle was the first to actually attend the meeting, Mayor Harold Rainwater said.

At the meeting, Mitchell was named a Kentucky Colonel by Governor Matt Bevin and Senator Tom Buford.

“This courageous and faithful mother gives the Energizer Bunny a run for his title,” King said in the statement.

Mitchell also received the Key to the City, roses and a chocolate birthday cake.

“I appreciate this more than I have words to say,” Mitchell said.

Before coming to Wilmore, she traveled and lived in various places including, Wisconsin, Indiana, Canada, British West Indies, Trinidad and Barbados.

Mitchell said Barbados was the highlight of her and her first husband, Jack Lashbrook’s, ministry, Caribbean Pilgrim College. In the ministry, Mitchell and Jack shaped the young minds of those who wanted to become ministers.

In 1960, she and her husband moved to Wilmore to be closer to her oldest son Paul Lashbrook, who was attending Asbury University.

The couple was planning to go back to Barbados at some point, but her husband passed away unexpectedly.

“I just stayed,” Mitchell said. I’ve been here ever since.”

Her family came to Wilmore as strangers, but she said the city quickly made them feel like home.

“It was amazing how this city reached out to me and my family,” Mitchell said. “We always felt welcomed and cared for.”

After her husband died, Mitchell began taking classes at Asbury College, where she graduated valedictorian of her class. She also received her Master’s in literature from the UK.

“As a student, I felt accepted, although I was an older student,” Mitchell said. “In those days there weren’t many older students.”

After graduating, she taught English at Asbury College until she retired in 1982 — around the time she met her second husband Jesse Rolland Mitchell.

Mitchell has lived in the same house for 57 years. Her son, John Lashbrook, moved in with her six months ago to help take care of her.

“My family has gone way out of their way to be helpful,” she said.

Her family is not the only ones lending a hand. For the past five years, a neighbor, Melissa Loper, has also helped take care of her.

Loper said Mitchell is a wonderful teacher and the best prayer warrior.

“She’s the most compassionate person I’ve ever met,” she said. “And I’ve met a lot of people in my life.”

Though her favorite book is the Bible, Mitchell said she also enjoys reading research pieces and books about poetry and health.

“I try to learn something new every day,” Mitchell said.

Her favorite poem is Daffodils by William Wordsworth — she can still quote some of the verses.

One thing Mitchell said she always wanted to do but never got around to, was visiting England in the John Wesley Territory. Though she may not be able to go now she does plan to read about it.

“Age doesn’t have to control the expansion of our mind and our understanding of what’s going on in the world,” Mitchell said.

She also enjoys music, sewing, recycling, going to church at the Free Methodist Church in Wilmore and gardening.

Mitchell’s green thumb has allowed her to keep a Sansevieria or Snake Plant, that she received as a wedding present alive for 70 years.

Much like the pieces of the Snake Plant — which can be regrown —  she has shared her knowledge with many in various places including Toronto Canada, Bridgetown Barbados.

She said if she could go back and change one thing, she would strive to be even more compassionate and aware of the needs of others.

“I would be more open to people’s needs,” Mitchell said. “To look deeper than just a friendship and try to understand from their point of view.”

When Mitchell was 8 years old, she said she had this feeling while she lying on her back and looking up at the blue sky.

In that moment, she said God told her to let her love expand and go far beyond just her immediate family.

Though she did not realize it at the time, that day changed her life.

“My proudest moment was when I told God I would do what he wanted me to do,” Mitchell said.

She attributes her longevity to her strong relationship with the Lord and keeping things in moderation.

“I knew pretty early in life that I had a strong life force,” Mitchell said. “I tried to cooperate with that as much as I knew how. And of course, with God’s grace, He helped me through so many tough places.”

Other factors she contributes to her longevity are dark chocolate, lots of water and eating healthy foods such as spinach.

“As long as I can, I want to keep doing what I should be doing,” Mitchell said. 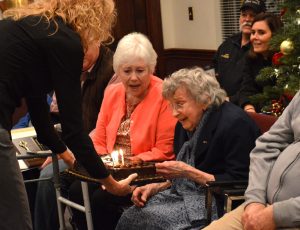 Correction: The award given to Ruth Lashbrook Mitchell was the Kentucky Colonel Award not the Kentucky Kernel Award.