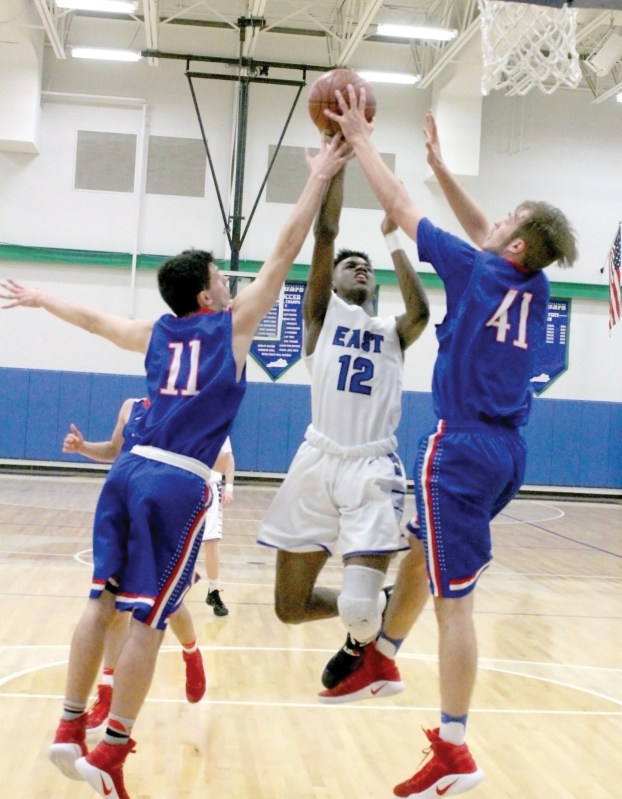 East can’t hold on against Lincoln

Much like it has been all season, it was a tale of two halves for the East Jessamine Jaguars Tuesday when region foe Lincoln Co. visited Nicholasville.

Taking advantage of eight first-half 3-pointers, East Jessamine dominated early on the way to a commanding 16-point halftime advantage that sent the visiting Patriots, who are among the region’s best, to the locker room scratching their heads.

But a less-than-impressive second half, which was marred by turnovers and missed free throws among other miscues, cost the Jaguars a golden opportunity and allowed the visitors to come from behind for a 64-54 win.

“We were obviously pleased with the first half, but in the second half we didn’t handle the pressure very well and we turned the ball over way too many times,” said East Jessamine Coach Chris O’Bryan. “And defensively, we didn’t have the same rotations and that hurt us. You have to give Lincoln County credit for sticking with their game plan and getting after us the way they did. But we’ve got to handle the pressure better.”

O’Bryan knew coming into the season there would be nights like this for his young and inexperienced squad which returned just one player with significant experience. But with the season nearing the midway point, the veteran coach is no longer willing to accept excuses for his team’s poor play.

While turnovers were an obvious problem in the final 16 minutes for the Jaguars, missed free throws were a bigger issue with East connecting on just 8-of-18 from the charity stripe in the game, including a dismal 5-of-12 in the fourth quarter.

“Missed free throws are always painful,” said O’Bryan. “We work on them and work on them, and you hope your kids go to the line with some confidence. But tonight, we just didn’t knock them down.”

Everything was clicking for East Jessamine early. Junior guard Jacob Bradshaw got the Jaguars started with a 3-pointer from the corner. Senior forward Christian Goen followed with a short jumper to put East up 5-0 before Lincoln finally got on the board.

A 3-pointer by Goen and a long-range bomb from sophomore guard Yallen Woods gave the Jaguars their biggest lead of the first quarter, 15-6, at the 2:10 mark, before Lincoln ended the period on a 7-0 run to pull within two, 15-13.

But East Jessamine was not fazed and came out firing in the second quarter. Woods got it started with a 3 in the opening seconds, followed by shots behind the arch from Bradshaw and Goen that helped the Jags extend the lead back to nine, 26-17.

Another 3 from Woods with just less than four minutes remaining in the half gave East its first double-digit lead, 29-19. Bradshaw scored four points, including another 3, while junior forward DeAnte Sanon added a jumper in the lane to propel the Jaguars to a 37-21 halftime lead.

Lincoln opened the second half with an 11-0 run while holding East Jessamine scoreless for nearly four minutes to get back into the game. The Patriots defense continued to stifle the Jags, who were held scoreless for the final four minutes of the third quarter, cutting the deficit to just one, 42-41, heading into the final period of play.

Lincoln tied the game at 47 less than three minutes into the fourth quarter, and took its first lead of the game less than a minute later, before closing out the contest on a 15-5 run over the final four minutes to complete the come-from-behind victory.

Woods and Bradshaw led East Jessamine with 16 points each. Goen added 11 to give the Jaguars three players in double digits. Drew Cook added seven for the home team, and Sanon chipped in four to round out the Jaguars’ scoring.

O’Bryan had hoped his team would use the game against Lincoln as a momentum-builder heading into a very important meeting with district rival West Jessamine scheduled for Friday. And while he was left with as many questions as answers after the game, he knows exactly what his team must do to be successful when it visits the Colts for the first meeting between the two this season.

“We’ve got to play a full 32 minutes,” he said. “We’ve had so many games this year where we play well for two and three quarters, then didn’t finish and didn’t do what we needed to. To play West in that atmosphere over there, we are going to have to play a very smart 32 minutes.”

But after nearly two decades of coaching against West Jessamine, O’Bryan knows what to expect from the Colts come Friday.

East has not been successful against its rival in recent years, losing six straight to the Colts dating back to the 2013-2014 season. But East Jessamine had won eight of nine against West between 2010 and 2014 and O’Bryan has no doubt his team has what it takes to get back to its winning ways against the Colts.

“It’s going to take a solid defensive effort on our part to pull out a win, but I’m very confident in our team,” he said. “Whoever can get their emotions under control will have the advantage early.”

There have been 50 total meetings between East Jessamine and West Jessamine since 1997, according to the Kentucky High School Athletic Association Scoreboard. West holds a 32-18 series lead during that span. O’Bryan, who became the head coach at East in 2000, is 18-24 all-time versus the Colts, according to the KHSAA.

Game time is set for 7:45 pm Friday at West Jessamine High School. The Colts come into the game with a record of 7-7. East brings a 5-12 mark into the contest.

Playing against a team ranked in the top-10 in the NAIA, the Asbury men’s basketball team kept things close in... read more