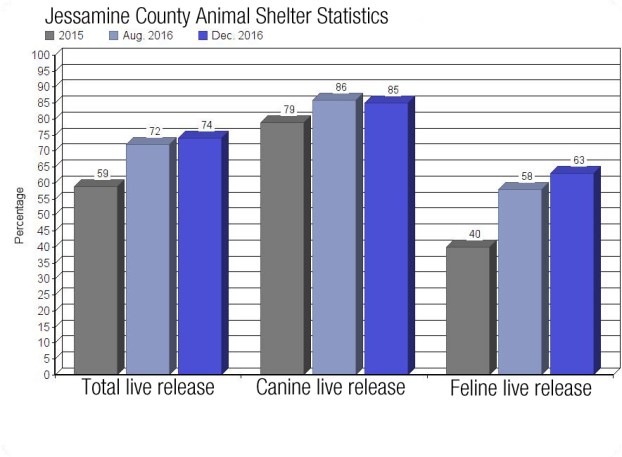 The release rates for live animals from the Jessamine County Animal Care and Control since Dec. 2015 have increased 15 percent.

Since the Jessamine Fiscal Court took over the operating costs in 2012, the JCACC has decreased their euthanasia rates, therefore increasing their live release rates.

“We use to be in a 2,000 square feet building,” Jessamine County Animal Care and Control Deputy Director Mike Cassidy said in August.

“The county built the current building in 2012, and it’s 10,000 square feet. They invested a lot of money, not only into the building, but with adding more staff from three to eight people.”

The statistics for the live animal release rates, from JCACC in 2016 show that since August of this year the center has increased their live release rate by two percent — from 72 to 74 percent.

“Our numbers fluctuate all through the year,” Cassidy said in an email to the Jessamine Journal. “There’s no real explanation for one going up a little and the other going down.”

In four months, the canine live release rate went down one percent, but the feline rate went up five – from 58 to 63 percent of felines being released.

The reason felines experienced such a dramatic increase, is because that was the focuses of the shelter this year.

In the past, felines were always what the shelter struggled with, Cassidy said.

“The best way we have found to improve the (feline) number is to prevent them from ever coming into the shelter,” he said.

The way JCACC achieves this is through a trap neuter release program.

The program — with the help from the Animal Hospital in Nicholasville and Friends of Jessamine County Animals — is responsible for trapping wild cats and spaying or neutering them. Then the shelter vaccinates the felines and releases them back to the area they came from.

“What we have learned in our four years of operating the shelter is, for it to be a success you have to have the community behind you,” Cassidy said. “We couldn’t accomplish what we have, without the support of wonderful groups and the public buying into our mission and supporting us. Jessamine County has embraced the new animal shelter, and we are very grateful for that.”

This year, the shelter had 15 percent more live releases than the 59 percent in 2015. For this upcoming year, Cassidy said his goal for the shelter is the same as every year: for a 100 percent live release rate.

Cassidy said he and his staff are in the only profession that wouldn’t mind seeing itself not needed anymore.

“My staff is all animal lovers who would like to see every animal find a loving home.” Cassidy said. “Is this goal obtainable? I would like to believe that it is, and if I lose that belief, then I think it would be time for me to find another profession.”

For more information on the Jessamine County Animal Care and Control visit http://www.adoptapet.com/jcacc/ or call (859) 881-0821.

Carmichael transitions from animals to mystery

In just three years, one local author published six different books about animals. Her seventh, which came out just in... read more