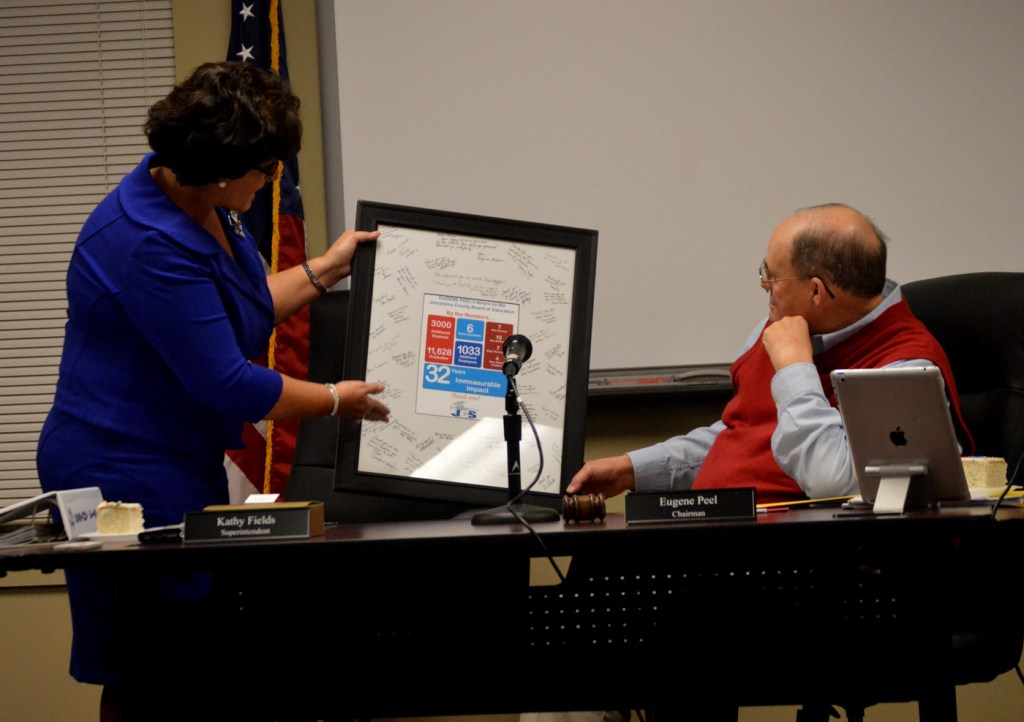 The chairman of the Jessamine County School Board moved to adjourn his last school board meeting on Monday night.

Eugene Peel has been a part of the Jessamine County School Board for 32 years. Over that time he has served as chairman twice.

Many attended the reception for Peel that was between the December work session and board meeting. Among them was Associate Executive Director of the Kentucky School Boards Association Kerri Schelling. Schelling said Peel has served the education system in many ways, including his help to put together the first board member job description, his service as conference chairmen and his participation on several planning committees.

“I don’t think we can say thank you enough for what you’ve done,” Schelling said about Peel.

As a gift to Peel, she gave him a print off of all the hours he has served in his 32 years on the Jessamine County School Board. Schelling said the minimum for a board member is 128 hours. Peel served 882 and a quarter.

“You have embodied, during your board career, the essence of what we want for our students,” she said.

Nicholasville City Commissioners Doug Blackford and Patty Teater presented Peel with a Key to the City for his many years of service to the community.

Former superintendent Linda France also spoke to Peel’s accomplishments, including his participation in the decision to build two separate high schools, selecting five different superintendents and being a part of the board that made the decision to create The Providence School and the Early Learning Village.

“I could name a thousand different ways he has been a service leader for this district,” France said.

Peel also played a role in changing the way the superintendent evaluation was done, now it is based on student performance.

“Your legacy will long outlive you,” Superintendent Kathy Fields said

Peel said his proudest moments during his time as board member was watching students walk across the stage to receive their diplomas.

“That is what what it’s all about,” he said.

He said he will miss the camaraderie of working with other board members to facilitate education.

Now that Peel has a few extra hours on his hands, he said he plans to spend that time with his family and grandchildren, and possibly do a little bit of fishing as well. At the moment, he is also serving on the Kentucky School Board Association Foundation as secretary.

Engineering Manager at Curtis Maruyasu America Bobby Welch will be sworn into the Jessamine County School Board before New Year’s Day and a new chairman will be chosen at the next board meeting beginning at 6 p.m. on Jan. 9.

“We certainly want to thank him for his dedication and 32 years of service to the students of Jessamine County,” Fields said about Peel.