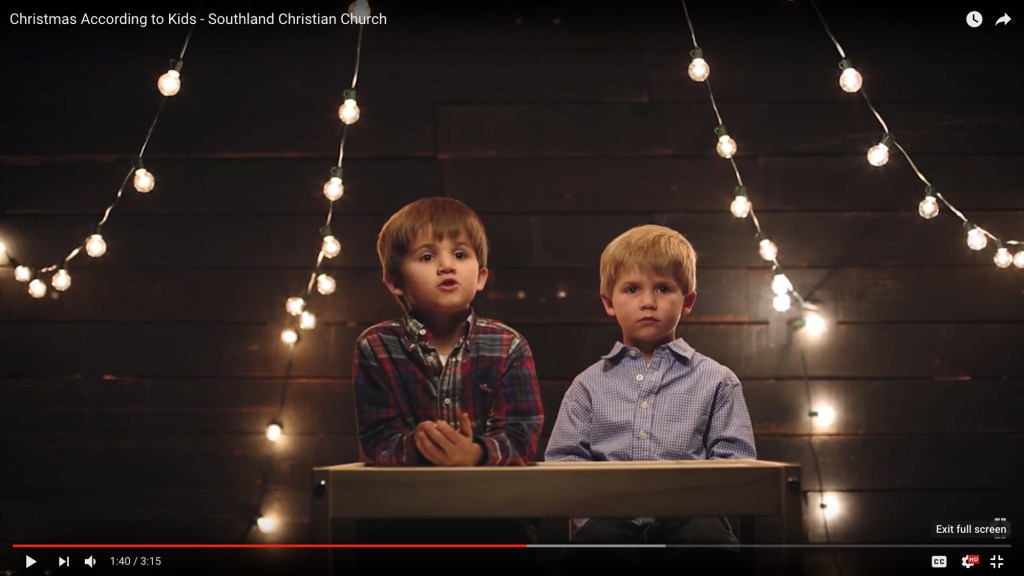 Screen shot of the "Christmas According to Kids" video.

Over 36 million people have experienced the Christmas story from a new perspective, thanks to a video made by a Nicholasville Church.

The video tilted “Christmas According to Kids,” was created by the Southland Christian Church. In the past year, the video has received over 35 million views on Facebook.

Neil Gregory made the video, which features children from the children ministries, pastors, staff members, ministry leaders and directors like Hanna Wahlbrink — a creative director at Southland Christian Church.

In the video, which was published in 2015 for the Christmas Eve services at Southland, the children are interviewed by church staff members about their take on the Christmas Story. These quotes are then acted out by adults.

“She was just doing laundry and then the angel just appeared and she was really scared,” one child in the video said, regarding Mary’s visit of Gabriel with news of her baby.

As the video continues, Mary and Joseph ride into “Bethle-ha-ha-ham” in search of lodging. They are turned away from a “hotel” and end up staying in a stable. The video also highlights the wisemen and the shepherd’s trip to see the new baby Jesus.

“We created the video for the Church to enjoy,” Wahlbrink said. “But it’s a win in general for the video to reach the world.”

The video has been featured by Today.com, helping it gain millions of more views.

“Churches in Canada and Australia have even reached out to us and asked if they can use the video,” Wahlbrink said.

The children deserve all the credit, Wahlbrink said. The kids were not fed lines, they simply told the camera their recollection of the Christmas Story.

“(The children) were the ones to tell the whole story, and their imaginations crafted the whole thing,” Wahlbrink said. “They probably deserve a lot more credit than we do.”

Wahlbrink believes the video, now a year old, went viral because of the upcoming Christmas season.

“The simple message of Christ’s birth from the mouth of sweet children is reaching people in a way we never expected,” Wahlbrink said.