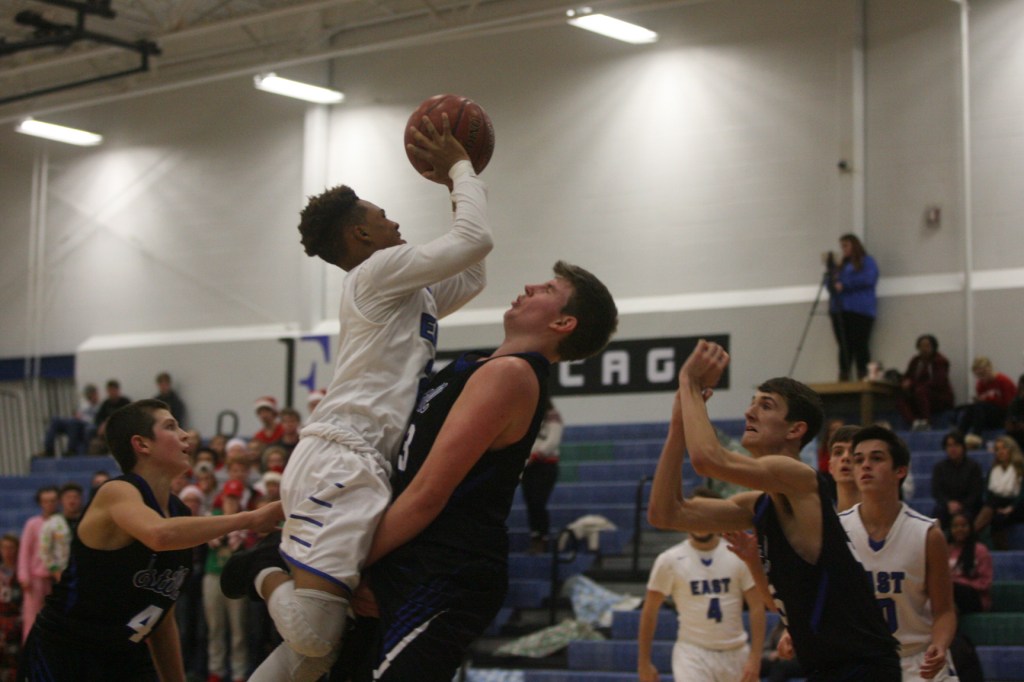 Wave after wave of East Jessamine boys’ basketball bench players hit the court on Thursday during the first half on a night that saw the Jaguars go ahead by nearly 20 points against an undefeated Estill County squad.

After suffering through three consecutive losses, East turned to the bench in what head coach Chris O’Bryan hoped would be an infusion of energy for a team that previously entered games flat and lethargic. O’Bryan’s decision paid off in a first half in which East took a commanding 33-18 lead with less than four minutes to go in the second quarter.

With starter DeAnte Sanon out (sick), East turned to freshman Michael Powell in Sanon’s stead. Though his first possession resulted in a turnover, his presence, along with freshmen Cion Townsend and sophomore Tyler Pitney, helped spur the Jags despite starters Yallen Woods, Drew Cook and Logan Gayheart all sitting with two fouls each.

Yet, as has been the case for East this season, the wheels promptly came off as the game bogged down because of a multitudinous of fouls and a fourth quarter that the Jags would more or less like to forget.

As a result, East surrendered a 39-23 halftime lead as Estill mounted a furious rally to win 73-65. The loss sends East to 1-4 on the season.

“It wasn’t fatigue because we substituted so many guys in that first half, we can’t pin it on that,” O’Bryan said of how East allowed Estill to fight its way back. “Defensively, we just didn’t rotate like we were in the first half. Give (Estill) credit. They kept fighting, digging and clawing their way back into it.”

For the Jags, a possible loss was the farthest thing from reality in the first half. Behind a tenacious defense and solid contributions from Cook, Will O’Bryan and Pitney, East dispelled any fears of a repeat performance of its past three losses. In addition, Estill was unable to find any rhythm on offense despite having a significant size advantage in the paint.

The Engineers, however, found their groove to begin the second half. Estill would score eight straight points to open the third quarter to cut East’s lead to 39-31. The Engineers were unable to trim the deficit to under eight points in the third as East took a 53-44 lead into the fourth.

East’s lead rapidly decreased in a fourth quarter dominated by Estill. The rally began when Caleb Bonny hit a three to cut the Jags’ lead to 53-48. Bonny followed with another three minutes later to give Estill its first lead since the first quarter. Cook responded with a three of his own to give East back the lead, 60-59.

But Bonny would hit another three seconds later. Estill would proceed to increase its lead as the fourth quarter wore on, to the frustration of East. That anger spilled over with 1:21 left in regulation, with Estill holding a 68-63 lead.

As Estill took the ball past mid court, Gayheart was involved in an altercation with the Engineers’ Robert Tipton. Gayheart was promptly rushed out of the gym followed by the bulk of the student section.

Tipton lied on the court unconscious for about three minutes before coming to. He was subsequently put through concussion protocol.

“It’s too early,” O’Bryan said of Gayheart’s future. “I don’t know. We’ll let the administration evaluate. I’m sure we’ll have meetings and we’ll go from there.”

The Engineers would hold on for the victory on a night that turned about as bad as it could get for an East team mired in a four-game skid.

“We’ve got to learn how to finish and play 32 minutes,” O’Bryan said of his team surrendering such a large lead. “We haven’t been able to put that together since the first game.”