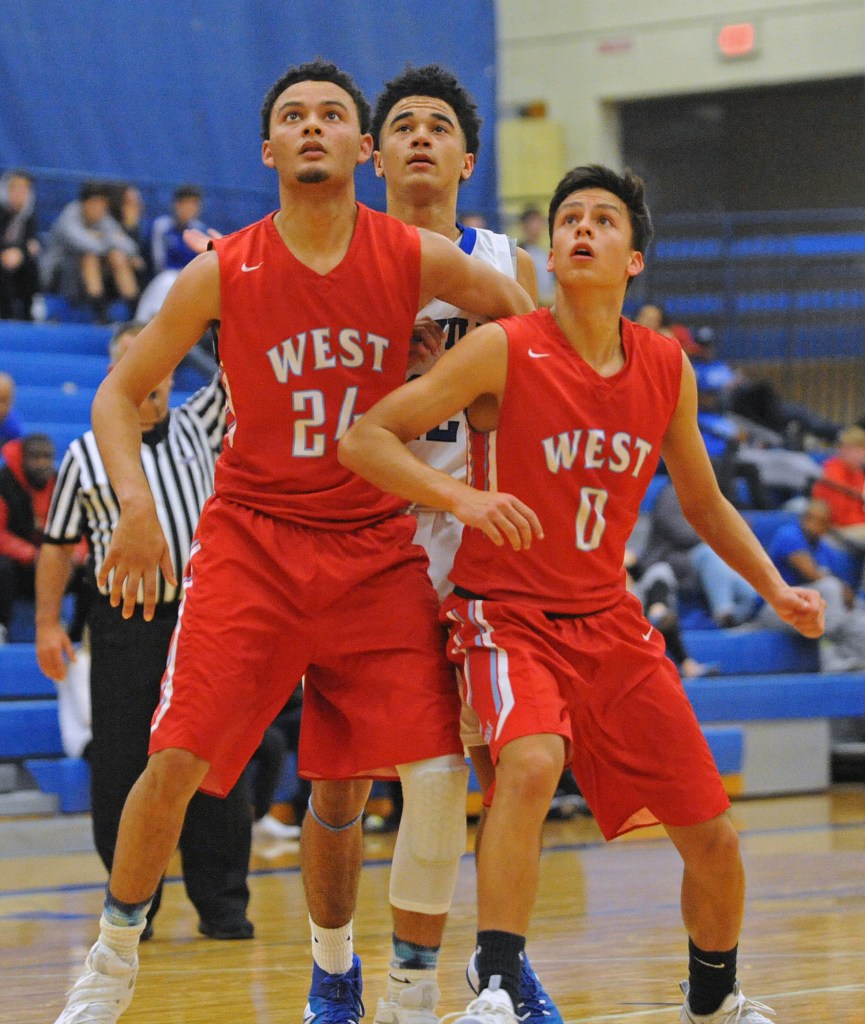 Matt Overing/matthew.overing@amnews.com Ty Caudill (24) and Isaiah Okesson (0) keep Danville's Zach Thornton out of the lane on a free throw in the second half. Caudill scored five points and Okesson had 21 in the Colts' 80-60 win.

West head coach Damon Kelley said he likes where his team sits this early in the season.

“I’m very pleased with where we’re at,” he said. “We’re playing really hard, I thought our effort was really good again tonight. Thought we were maybe not quite as sharp mentally tonight, and I think that showed. Defensively we were a little lazy in our rotations, we struggled at the free throw line, which is not like us. But I think that’s mental stuff.”

The Colts opened the game on a 7-0 run before Danville tied the game at 9-9. But West’s offense continued to get easy looks at the basket, ending the first quarter ahead 22-18.

Peters scored 10 points in the first quarter, four of which came from the line. He finished 9-of-10 from the foul line and added one three.

“Kendall is very talented, very gifted athlete,” Kelley said. “The thing about us is we’ve got a handful of kids who can put points up on any given night. It’s not going to be the same kid every night, but he’s one of those that is capable of coming out and having a big night for us. He was able to go to the rim and finish strong tonight, but he knocked down jump shots, too. That’s what makes us hard to guard is the ability to do both.”

“They’ve got a very nice team,” Danville head coach Ed McKinney said. “They’re well-coached, they’ve got good perimeter players. They’re going to be a hard out. If you can guard them off of the dribble, you can guard a lot of teams … That team, I would imagine, will be right in the thick of the regional title hunt.”

Half of the Admirals who played on Tuesday played in the KHSAA 2A state championship football game on Sunday, and Kelley credited them for coming out so strong in the first quarter.

“Give Danville a ton of credit, how in the world those kids were on the football field two days ago and came out here tonight,” he said. “We didn’t have a scouting report, we didn’t know much about their personnel. Give them a lot of credit for us not being sharp. I’m thrilled to come out of here with a win.”