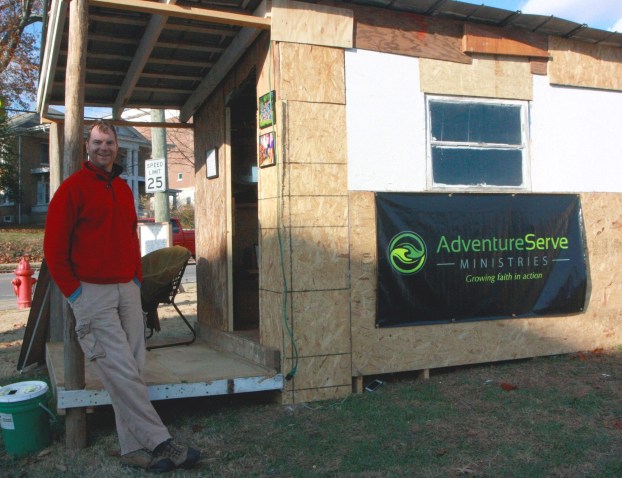 The executive director of AdventureServe Ministries recently kicked off a fundraiser campaign  by altering the way he lived for five days.

Andy Bathje stayed in a shack — built by the ministry entirely out of scraps — for five days to get a better understanding of how people who the nonprofit organization helps live.

“You have to live with less so people can live with more,” Bathje said. “So many of our clients are trying to find warm, dry and secure housing.”

Bathje called the shack on the Wilmore Presbyterian Church grounds home for five days to launch a five week campaign with the Good Giving Challenge. In addition to staying in the cold, Bathje also didn’t buy any food for the five days.

“The most important aspect of it, is to raise funds to continue serving people in the state,” Bathje said. “But doing this has given me a better sense of gratitude for the community. So many people have offered food or blankets to me within my time stay (in the shack).”

The Good Giving Challenge, hosted by the Bluegrass Community Foundation, consists of 120 nonprofits trying to raise $5,000 and 100 individual donations.

“Staying here at the intersection is so loud,” Bathje said, referring to the shed’s location at the corner of Lexington Avenue and East Main Street. “It’s close to the train tracks, and the shack doesn’t have good insulation. But there is so many people that live in less appealing places, and have to deal with noise and pollution added to their own challenges of trying to make a living and caring for their children.”

Over the past three years, the AdventureServe teams have completed 80 home repair projects in 14 different counties. The ministry has spent $45,500 to assist families living in substandard housing.

The idea of staying in the shack, came from a similar fundraiser by the Alabama Rural Mission —  an organization whose goal is to eliminate substandard housing in rural Alabama.

The five days of Bathje staying in the shack, ended with a fundraising dinner during the Wilmore’s Old-Fashion Christmas.

The Good Giving Challenge is going through Dec. 31 and those looking to donate or get involved can go to http://bit.ly/2h2Ngab for more information.

Mayor Harold Rainwater announced at the Wilmore City Council meeting on Monday that 40 to 50 Christmas trees are still... read more