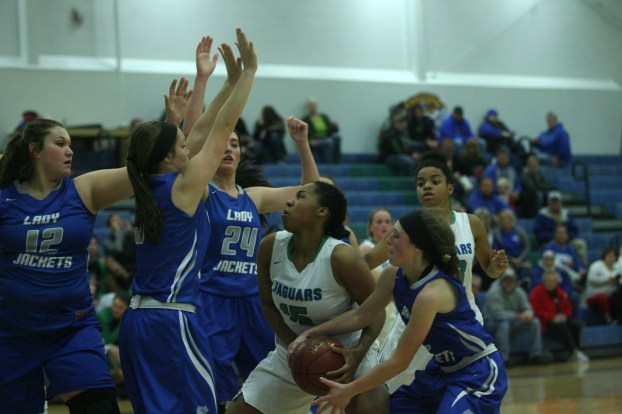 The East Jessamine Lady Jaguars hoops team suffered their second consecutive opening-season loss Friday as Nicholas County cruised to a 59-35 victory behind an aggressive defense and a balanced offensive attack led by the 15 points from Grace Kiskaden.

The contest was the debut of first-year East head coach Todd Claunch. With a new coaching staff in place, and several new faces throughout the roster, the Lady Jags ushered in a new era of basketball in front of the large contingent of East fans that were on hand to witness both the boys and girls’ teams play.

Though the first six minutes of the game swung East’s way, thanks to five quick points from Hannah James, Nicholas ramped up the defensive pressure and took control midway through the first quarter. After East jumped out to an early 5-0 lead, the Lady Jackets settled down and took their first lead at 10-8.

As Nicholas stretched its lead to 24-17 with under three minutes remaining in the first half, the inexperience and rust of East became evident. Without their primary offensive targets from last season — Emma Young and Haley Harrison — the Lady Jags have turned to the youth of Jalynn Landversicht, Jessica Hall and James to lead the offense.

The relative youth of East led to a tentativeness on offense that Nicholas exploited through an aggressiveness that surprised the Lady Jags. As a result, the Lady Jags, at times, struggled to advance the ball past midcourt against the Lady Jacket’s full-court pressure. And whenever East was able to set up its half-court offense, it struggled to attack the paint and sag the defense.

“The key for us to be here and to be in the game at the end with an opportunity was rebounding, turnovers and 50/50 balls that we had to win a majority of to pick up a possession,” Claunch said. “I know when I look at the stats we lost on all three of those.”

Those inabilities allowed Nicholas to stretch its lead to 33-22 at the half.

East’s deficit increased in the second half as the Lady Jackets promptly opened the third quarter with a three pointer that stretched the Lady Jags’ deficit to 14 points. East would then fall behind 46-31 entering the fourth quarter.

Though the scoring was balanced for East — 13 points for Landversicht, seven for James, six for Hall, five for Smith and four for Briana Beavers — the Lady Jags’ offense was hindered by inexperience and tentativeness that the Lady Jackets exploited.

Though East had trouble finding many open shots for most of the night, there were a few instances where the Lady Jags were able to find open cutters and players open in the paint. But for the most part, East was pressured into unnecessary turnovers when it tried to force the issue.

“We’ve got to slow down a little bit,” Claunch said. “We’ve got to realize that we can’t force it. That’s where we’re still learning. I expected a lot of turnovers, but I didn’t expect us, against the press, to throw it to (Nicholas) over and over again.”

Of course, panic is far from the mind of Claunch. With just two seniors on the roster, and an entire season ahead for East, the Lady Jags have plenty of time to discover their strengths and weaknesses. They just happened to run into a buzz saw that was a stingy Nicholas defense.

This slideshow requires JavaScript. With Anderson County’s Christian Gritton at the line to shoot two free throws and down one,... read more