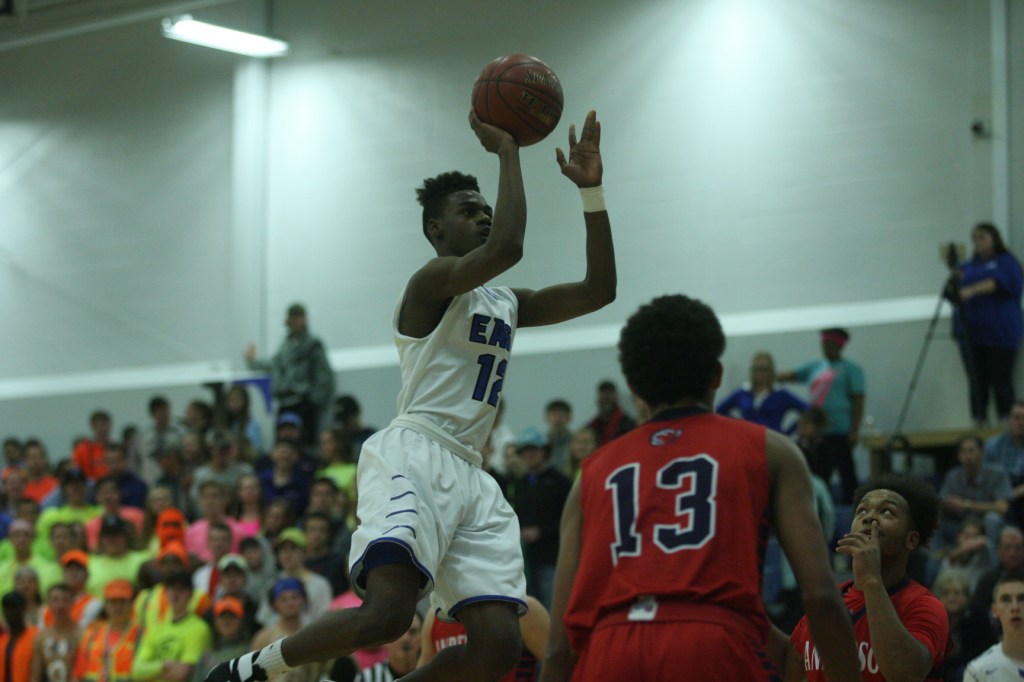 With Anderson County’s Christian Gritton at the line to shoot two free throws and down one, 81-82, with 6.3 seconds left in the second overtime against East Jessamine on Friday, little did the Jaguars know that, win or lose, their story was already written.

After a disappointing 2015/16 season in which East finished third-to-last in the 12th Region, the Jags entered this year with the same core group of players, minus their leading scorer, Nathan Harper. For that reason, East entered this season shrouded with more questions than answers.

Yet through two games, the Jags have proved that this year’s team is leaps and bounds ahead of the team that fell to West Jessamine in the opening round of the 46th District Tournament in February.

“These last couple of years, I’m not sure those teams had the fortitude that this team showed,” East head coach Chris O’Bryan said. “They went down by 13 there at one point and we battled back. It’s the little things.”

Gritton would proceed to make the first free throw to knot the game at 82, he then missed the second. However, Brennon Maxberry grabbed the offensive rebound and hit the layup to put the Bearcats up 84-82. East’s last-second desperation heave fell harmlessly to the court and Anderson escaped with the victory.

With the loss, East slips to 1-1 on the season. The defeat came after a game in which the Jags fell behind 13 points early in the third quarter. Yet despite multiple turnovers, shots not falling and an Anderson full-court defense that caused East fits all evening, the Jags rallied back behind the constant attacking of Yallen Woods (18 points), the unflappability of Drew Cook (17 points), the untapped talent of DeAnte Sanon (14 points), the clutch shots of Christian Goen (10 points), the aggressiveness of Logan Gayheart (10 points), and the reliability of Will O’Bryan (8 points) and Jacob Bradshaw (5 points).

“I’m proud of every one of them,” O’Bryan said. “I thought Drew and Yallen really took control and got us back in it. (Also) Christian hit a big three and Will hit a big three. Everybody contributed.”

East would eventually retake the lead, 55-53, midway through the fourth quarter on a Woods layup, which preceded an Anderson technical foul — There were three technicals called in the fourth, two on the Bearcats and one on the Jags.

The Jags then stretched their lead to 60-53 after a Cook three with less than three minutes in regulation; however, the Bearcats would rally and even the game at 65. With the clock ticking down, Cook’s shot as the buzzer sounded clanked off the back rim, sending the game into the first overtime.

The two teams were unable to find enough separation through the first overtime. That allowed Woods a chance to send East out with the win in the final seconds, but his shot from the perimeter missed, sending the game into the second overtime with the teams tied at 71.

East went up by two baskets late in that second overtime and had a chance to go up two in the final seconds, but a missed free throw breathed new life into the Bearcats.

Final – Anderson overcomes multiple deficits in the 2nd overtime to defeat East 84-82 in a thrilling contest. Jags sit at 1-1 on the year. pic.twitter.com/eLR9yVsTp9

“We didn’t do as well from the free throw line as we would have liked, of course, because we hit one or two more and we win the game,” O’Bryan said. “I thought down the stretch they did alright. I think we only missed one when it really mattered. There was a lot of pressure there.”

As is the reality of sports, coaches gauge more about their team from how they respond through adversity. Such is case for O’Bryan.

“This team really fought and showed a lot of character,” O’Bryan said. “I think if they keep fighting and digging like they are, they’re going to be alright come tournament time.”