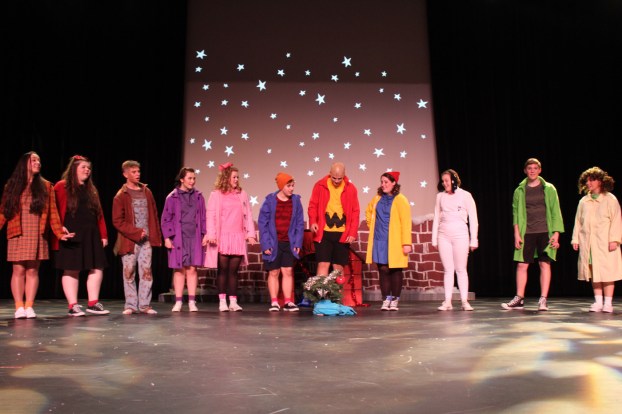 For some, the words “good grief” during the holiday season triggers nostalgic memories of cartoon characters dancing to that signature song, and Charlie Brown getting the pitiful looking tree in “A Charlie Brown Christmas!”

Students on the West Jessamine High School Drama Team will be performing the episode of Charlie Brown that has been a Christmas favorite since its release in 1965.

“We were looking at something that was really going to get all students involved,” said District Arts and Humanities Coordinator Jessica Greene.

In the episode, Charlie Brown is put in charge of  finding a beautiful aluminum Christmas tree, instead he gets a small wooden sapling that’s barely able to hold an ornament. Brown is determined not to let commercialism ruin his Christmas. In the end, the episode gives the true meaning of Christmas — the birth of Jesus Christ, not commercialism.

The team at west began working on the production in October. English teacher, drama coach and director of the play Devon Collins, said she plans to keep true to the story.

“It’s pretty much word for word the Christmas special,” Collins said. “You’re going to come see what you watched as a kid.”

Collins said her favorite part of the play is when the cast gets to do that iconic Peanuts dance.

“It makes me laugh every time,” she said.

Though the actual show was before her time, Collins said she did watch all the specials including “It’s the Great Pumpkin, Charlie Brown,” “It’s The Easter Beagle, Charlie Brown” and “A Charlie Brown Christmas.”

“It’s just a story that everybody knows, and it’s good for people of all ages,” Greene said.

West Jessamine High School will perform the play on Dec. 1, 2 and 3.

Asbury University students recently shared stories of their trip to the 2016 Summer Olympics with residents of Wesley Village on... read more