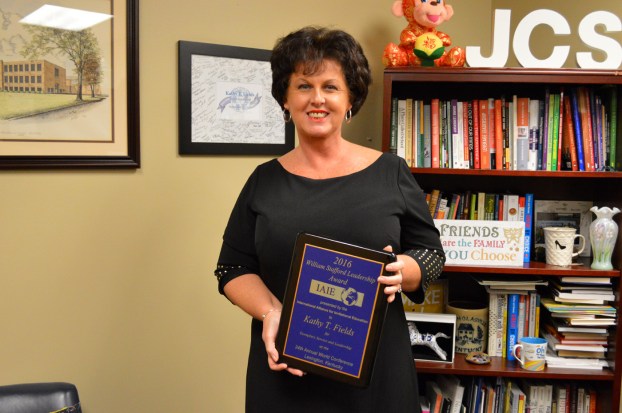 The superintendent of the Jessamine County School District received a leadership award at the 34th Annual Invitational Education World Conference in November.

The conference was hosted by the Jessamine School District in Lexington on Nov. 2 through 5 to bring together school climate experts and educators from around the world. The educators shared their successful strategies for creating the optimal environment for teaching and learning.

Many educators from places including Hong Kong, Mainland China, Australia, Mexico, Malta, South Africa and Canada were in attendance.

Superintendent Kathy Fields was one of only three people to win the William Stafford Leadership Award.

“I was so surprised,” Fields said.

The award was established by IAIE in 2003 to recognize exceptional servant leadership within the alliance. It is given every other year at the IAIE annual meeting.

The award is named in honor of the late Dr. William Stafford, former Professor of Counselor Education at Lehigh University and a founding member of the IAIE.

Nominees for the William Stafford Leadership Award — the highest award presented by the organization — must have a minimum of three years of distinguished service and leadership to the International Alliance for Invitational Education.

Distinguished service and leadership can be defined in several ways, including outstanding performance over time in key alliance leadership roles and responsibilities such as membership and leadership on committees, editorial boards, boards of trustees, advisory councils, IAIE coordinators and other IAIE activities. Distinguished service and leadership can also include significant contributions to the development of invitational theory and practice in published works, conference presentations, or authorship of articles, books, media, and other publications.

Fields has been a member of IAIE for almost 20 years. She came into a leadership position on the advisory board in 2013, and in 2017 she said she will become a member of the IAIE Board of Trustees.

She said her favorite part about the alliance is the international exchange program that, for the past four years, has allowed educators and students to come stay in Jessamine County with host families for two weeks.

“It’s opened so many cultural opportunities for our students here,” Fields said.

So far, Jessamine County has hosted visitors from Hong Kong, Mainland China and two years ago, Red Oak hosted a school from Mexico. Fields said at the World Conference she met an administrator from Tanzania in South Africa who showed interest in the program.

“The connections are just amazing and, of course, it just makes the world so small,” Fields said.

Fields was also one of the first members of IAIE to visit Changchun in Mainland China, and she will be going back with a team of Jessamine County teachers over spring break to help create a new school.

She and the team will spend seven days in Mainland China — at no cost to the district — doing professional development and teaching.

“We’re going to take the best of Jessamine County as far East as we can travel,” Fields said.

Over the past several years, Jessamine County has easily hosted 100 students, she said

“It’s been a great experience, Fields said,” “I hope that we can continue the partnerships.”

Fields said The William Stafford Leadership Award goes perfectly with the district’s strategic mission to making sure students are life and career ready by the time they leave school.

“I’m so honored,” Fields said. “And I was pleasantly surprised and very humbled to be recognized on a national level and be able to represent Jessamine County Schools.”

Fields was not the only person from Jessamine County to receive an award at the 2016 IAIE World Conference. Brookside Elementary, Warner Elementary, East Jessamine Middle and West High all received the Inviting School Award for demonstrating exceptional implementation of Invitational Education philosophies.

The next level of the awards include the Fidelity award, which Jessamine Early Learning Village, Red Oak Elementary and Wilmore Elementary achieved last year.

“I am so incredibly proud of them,” Fields said.

A Nicholasville native was featured on the ABC television show “How to Get Away with Murder” in November.  Jeffrey “Kurt”... read more