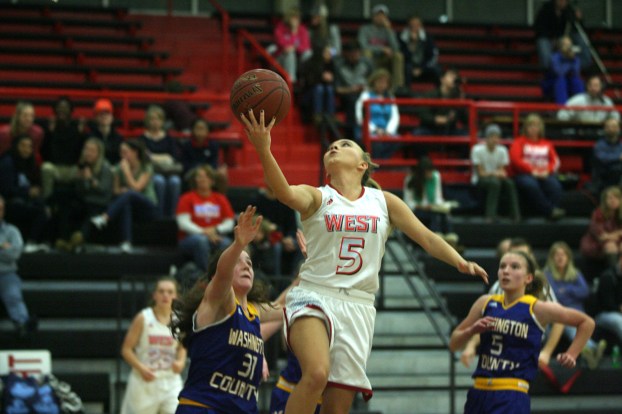 As easily as West Jessamine hoops defeated Washington County on Monday to open the 2016 regular season, it would come as a shock to some that the Lady Colts cruised despite an usual offseason thanks to the girls’ soccer team’s deep run through the state tournament.

That state championship run meant that West went without two of its starters for the majority of fall camp, Anne Lee and Rexford. Yet despite their absence, the two transitioned with ease into the basketball season as Lee led all with 18 points in what blossomed into a 72-30 victory for West and Anna Rexford finished with a double-double.

“We’re going to be led by our guards,” West head coach Jason Seamands said following the game. “That’s the best I’ve seen (Lee) play. She balled. She had total control of the game from beginning to end. It was her game. She dominated the game without dominating the ball. That’s a great compliment to a point guard.”

Fellow guard Bethany Hamilton staked her claim defensively as she harassed the Commanderettes all throughout the night. With both seniors prowling the perimeter, teams will have trouble with the speed and athleticism of the two multiple-sport athletes. And there was no greater display of that statement than their ability to control and dominate Washington County.

The biggest question entering the game was whether West would be able to find enough paint touches with a predominantly four-guard rotation and a lack of bigs. However, that question was answered as the Lady Colts easily controlled the paint on Monday. Spurred on by a torrid perimeter game — the Lady Colts made eight threes on the night, which forced Washington County to extend its defense — West was able to find lanes throughout the night without much trouble.

That enabled West’s bigs, Rexford and McKenzie Ivey, to stake their claim under the basket and to crash the boards. As a result, Rexford recorded 11 points and led all with a team-high 15 rebounds. Ivey followed with six points and 10 rebounds.

“We’ll take perimeter shots, but we want to get paint touches,” Seamands said. “I thought most of our threes came from a paint touch; either a post feed or a drive into the paint. If you’re not getting paint touches you’ll find that those threes won’t go as much.”

Offensively, the game tilted West’s way because of the strength of its defense. All throughout the night, the Lady Colts hounded the Commanderettes up and down the court. For most of the game, Washington County had trouble even advancing past half court.

With West still feeling its way around a squad that hasn’t spent much time facing one another this offseason, the 42-point victory over Washington County could be a sign of things to come. With a combination of leadership, speed and determination, the Lady Colts proved Monday how far they have come under the tutelage of Seamands.

This slideshow requires JavaScript. If Dalton Bruner’s game-winning three in the final seconds of Friday’s “Meet the Colts” scrimmage were... read more