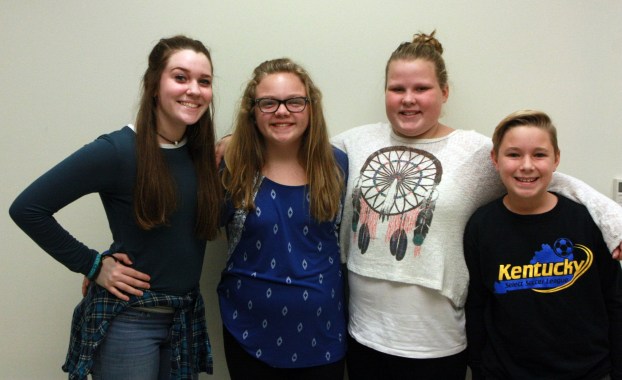 A group of students at East Jessamine Middle School has grabbed the attention of the fiscal court and multiple news sources.

On November 15, Judge West recognized the student-led organization, Precious Paws, during the Fiscal Court meeting on their work for the Jessamine County Animal Care and Control. The students also received proclamations, and have been featured on 105.9 JESS-FM and Lex18 concerning Precious Paws.

For the project, students visit JCACC every Tuesday year round, even when school is not in session.

The students make videos of the animals in the shelter with the goal to “Empty the shelter.” In the process of doing the project one of the members, Carpenter, has even adopted a dog.

“Every animal they have showcased has been adopted,” East Jessamine Middle School Teacher, Tracy Adams with the STLP, said.

Archer said they started creating the videos to show the animals are good with kids and that they are friendly.

“We also made a video for one of the Pit Bulls (at the shelter) to break the stereotype that is associated with the breed,” Archer said.

Not only do the students put out commercials and content every week for the JCACC, they are also involved in after school activities such as dance, softball and soccer.

The group received a 97 percent out of 100 at the regional competition for STLP,  and they are heading to state in April next year.

“If they win state, I get to take this to Texas for Nationals,” Adams said.

To view some of the students work visit http://bit.ly/2flqLLM

Three more readers in the community

The sound of a bell ringing throughout the community on Saturday, Oct. 29 that signaled a group of children can... read more