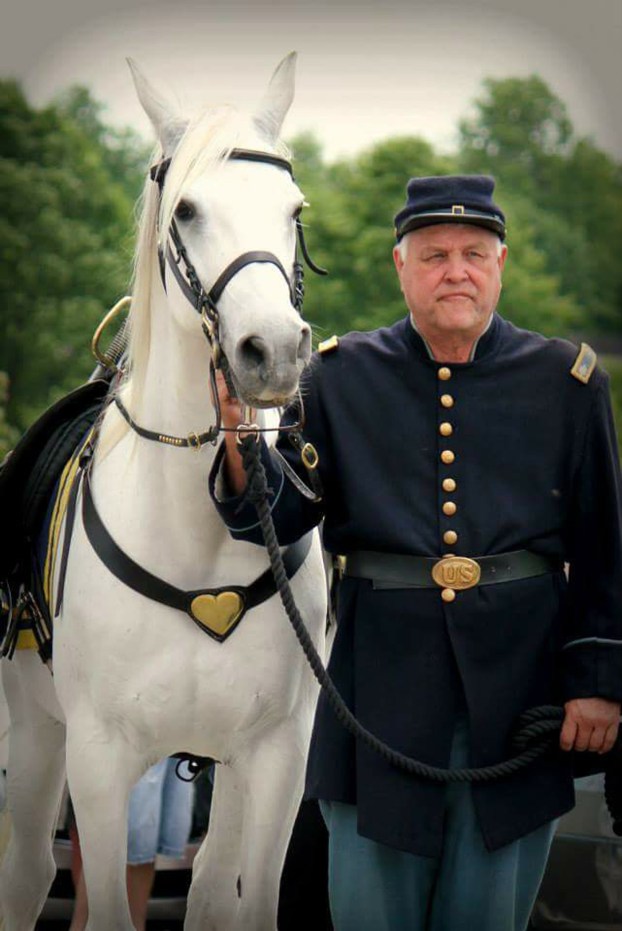 Many mourn the loss of a riderless horse

One horse, who participated in 180 different veteran’s funerals, may soon have a ceremony of his own.

Kosmios, a 17 year old Arabian White, was put down on Nov. 15 after being discovered in a field with a broken femur.

“I hoped he had just sprang something,” owner Clare Friend said.

After X-rays and a medical examination by Rood and Riddle Veterinarian Woodrow M. Friend, Clare’s brother,  it was discovered Kosmios would have to be put down.

“No horse lover wants to hear that,” Clare said. “He was my baby.”

For the first six years of his, life Kosmios resided on a farm owned by Ruth Putnam before he was purchased for Clare by her father Woody Friend, a retired Air Force Lt. Col.

Clare said Kosmios was one of the horses she thought Putnam would never sell.

“He was the prettiest thing I’d ever seen,” she said.

In 2010, Clare began volunteering in the caisson funerals available at Camp Nelson National Cemetery. Those funerals include a single horse-drawn Caisson, a riderless horse and a light artillery piece.

“We’re one out of only three in the nation,” said Col. Tracy Lucas, Commander of the Camp Nelson Honor Guard. “And were the only one in the nation that’s all volunteer.”

In the funerals, Clare would lead the caisson horse — the horse that pulls the flag draped casket. She said she wanted to get her father involved by having him lead the riderless horse.

Woody said if he was going to lead a horse, it was going to have to be better-looking one than the one that was being used at the time, so he suggested Kosmios.

“He was snow white and absolutely beautiful,” Woody said.

As the riderless horse, Kosmios would carry an empty saddle on his back with boots reversed in the stirrups. This symbolized the deceased veteran’s final farewell and that he or she would never ride again.

Clare was hesitant about using the Arabian horse at first, because he was known to be very excitable.

The first time Kosmios was at the cemetery, he was spooked by a truck bringing in tombstones.

“He saw that big semi, and the breaks went off, and he lost it,” Clare said.

Eventually, he got used to the sounds and occurrences at the national cemetery.

“As time went on, he got better and better at it,” Clare said.

Kosmios, the only solid white Arabian on the 13-horse family-owned farm, was buried on the property on Friday.

“I am heart broken,” Clare said. “But he served his veterans, and that was a nice thing.”

Lucas said he will contact the Director of Camp Nelson National Cemetery to discuss hosting a ceremony for Kosmios similar to the one that was hosted a few months ago for Iireland, a military K-9 who served two tours in Iraq.

“Everybody loved that horse,” Lucas said. “He’s took a lot (of military and veterans) to their resting place with respect and honor.”

Kosmios poses for a picture.

“He was a ham for being photographed,” Woody Friend said.

Woody Friend leading Kosmios during Memorial Day. “He was a wonderful horse and were going to miss him,” Friend said.

For some, the holidays are enjoyed by spending time with family. For others they are just another reason to miss home. ... read more