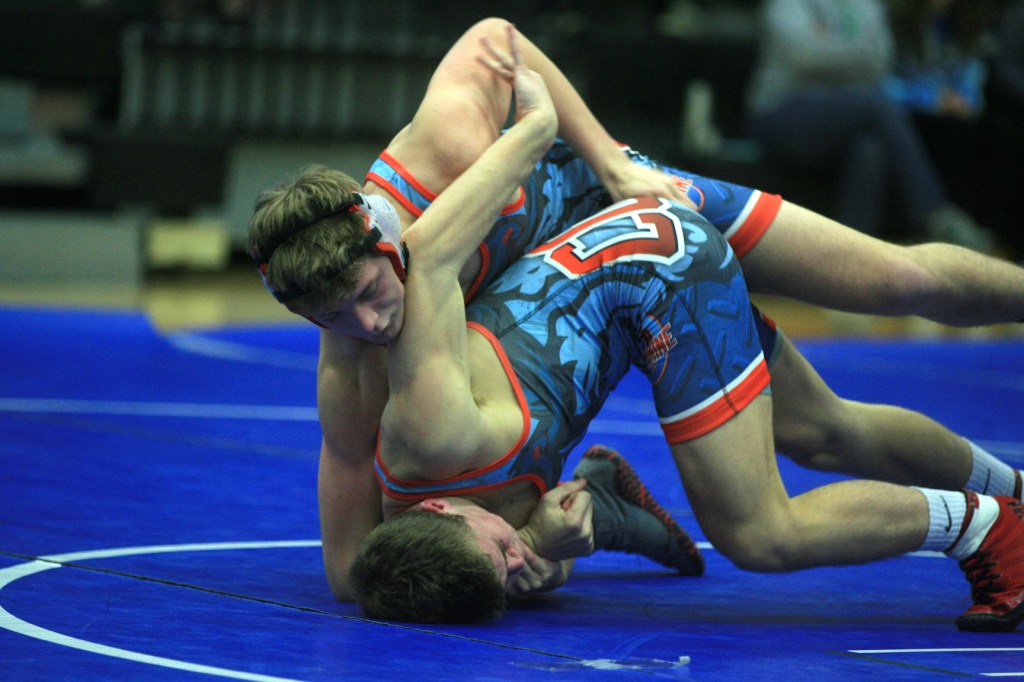 After some speculation over the summer as to whether the Jessamine County wrestling team would break into two separate entities this season (East and West Jessamine), the two clubs will instead remain under one umbrella with first-year head coach John Hazlett leading the way.

With the departure of former head coach Brian St. James, Hazlett moves up from his assistant coach role to lead both East and West into what he hopes is a semblance of relevance throughout a sport rooted in tradition amongst powerhouse programs such as Fern Creek, Union County and Woodford County. It is also a sport that is seeing waning participation throughout the country.

It’s a battle that Hazlett is prepared for.

“Like we do each night with the youth wrestlers, we want to get the word out to the community, to our teachers and the people,” Hazlett said about building name recognition. “We’re planning on doing another event in January for senior night. That will give us an opportunity to showcase those kids and get their friends in. It’s an opportunity to bring that presence in.”

The journey for both East and West started Thursday during the Jessamine County wrestling showcase hosted by West. With a mix of high school and youth wrestling, both teams hit the mat for the first time in an official capacity this season. Much like last year, the two teams consisted of a few returnees and a host of young, first-time wrestlers.

“It’s been much harder than I thought,” Hazlett said of bringing in new faces.

With little interest amongst high school athletes of other sports, Hazlett has had his hands full in building a program that can consistently keep pace with the top clubs in the state. Not that it can’t be done — Hazlett has aspirations of qualifying all four of his current captains for regionals and the state tournament this season.

Should that happen, Hazlett hopes that people will begin to take notice of the young, and oft-overlooked winter sport.

One of the keys that the team is targeting is the youth program. Being able to bring in wrestlers at the elementary and middle school level will help offset the lack of interest at the high school level. And as Hazlett noted, it’s a process that’s working.

“It’s one of the most successful avenues we have right now,” Hazlett said. “A lot of just word of mouth. Having kids get their friends in and just ask people to come out.”

Committing high schoolers to the process has been more difficult. A few have shown up only to take in just one practice and decide it’s not for them; some have shown up with no experience and some have written off the sport completely. But that’s part of the growth for a sport that’s still in its infancy in Jessamine County.

Fortunately, as was evident on Thursday during the showcase, the wrestling team has a substantial amount of elementary and middle school wrestlers. In that aspect, the future looks bright for the team.

Still, Hazlett just wishes the number of people showing up would be higher.

Those numbers might potentially grow as the KHSAA has sanctioned new uniform rules for the sport. To the alarm of many traditionalists, the singlet won’t be the main form of clothing anymore, as the wrestling advisory committee has deemed that the singlet could be an inhibitor for some students.

Wrestlers now can wear board or compression shorts. They can also now wear shirts that are tight fitting and short sleeved.

With turnout below expectations, the goal for the wrestling team is to develop the wrestlers that they have within the youth program.

“I have wrestlers there that are ready to step up and continue on,” Hazlett said. “I’ve got to make sure to continue and develop that next generation of wrestlers for Jessamine County.”