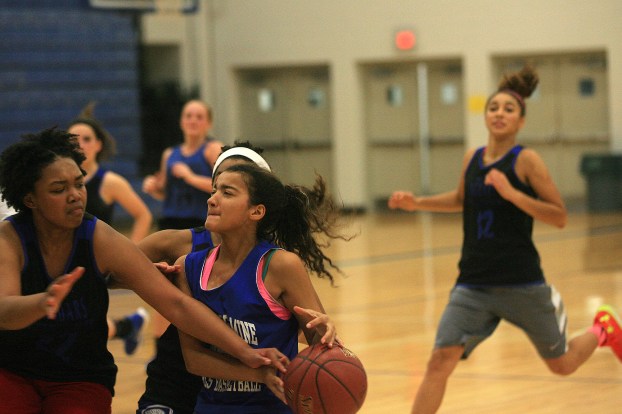 After the departure of three seniors who averaged a combined total of 41 points per game, and the transfer of last season’s second-leading scorer and rebounder, Haley Harrison, East Jessamine hoops enters the 2016-17 season under first-year head coach Todd Claunch thrust in the fog of war.

Admittedly, Claunch is well aware of the challenges facing a team lacking in experience and depth.

“It’s a learning curve,” Claunch said of his team’s lack of experience at certain positions. “For some (players), it will just be them being there and doing it more.”

Fortunately for the Lady Jaguars, the return of Jalynn Landversicht, Hannah James and a host of incoming and returning young talent will infuse the team with a dose of much needed experience and promise.

On a team that won a program-best 23 games last season — and advanced into the 12th Region Tournament — Landversicht averaged 7.8 ppg while James (a softball phenom) averaged 3.3 ppg.

This season, the growth and success of East will rest squarely on the shoulders of Landversicht.

“Jalynn will be the anchor of course,” Claunch said. “She comes back with the most experience. Jaylnn’s been working since the beginning of school and back into the summer.”

With the pieces now at Claunch’s disposal, his job is to slowly start implementing his own personal style of play; a style that will involve around pushing the tempo.

Much like what the Lady Jags did last season with the dribble-drive threat of Emma Young, East will continue to get up and down the floor.  Yet this time, Landversicht will be the signal caller.

“We’ll look to push,” Claunch said. “We’ll run some halfcourt stuff when the opportunity presents itself. A lot of it will be a matchup type thing, what kind of matchup we’re facing.”

However, without the three-pronged attack of Harrison, Landversicht and Young,  it probably won’t come as a shock to many if the Lady Jags regress this season. That’s not a bad thing. Every team takes a step back as seniors depart and players transfer.

As a result, the job now of Claunch is to teach his players that as in life, to win in basketball you have to lose before you start seeing success. Hence his focus on building the mental toughness of his players.

And that is what East will need to become this season — a team. Without a player that can take over a game as did Young, the Lady Jags will need to supplement the talent of Landversicht with a supporting cast that is more than up to the challenge of competing in a tough 12th Region.

Regardless of the hills needed to be climbed and the valleys standing in their way, Claunch has hopes of his team returning to the 12th Region Tournament.

“Our team goal is to compete for the district championship and win a game in the region,” Claunch said. “Anything beyond that is icing on the cake.”

Yet for that to happen, East will have to overcome the rising talent of West and the winner of eight-straight 46th District championships, Mercer County.

The 2016 high school fall sports season has officially come to a close for Jessamine County athletics. And what a... read more