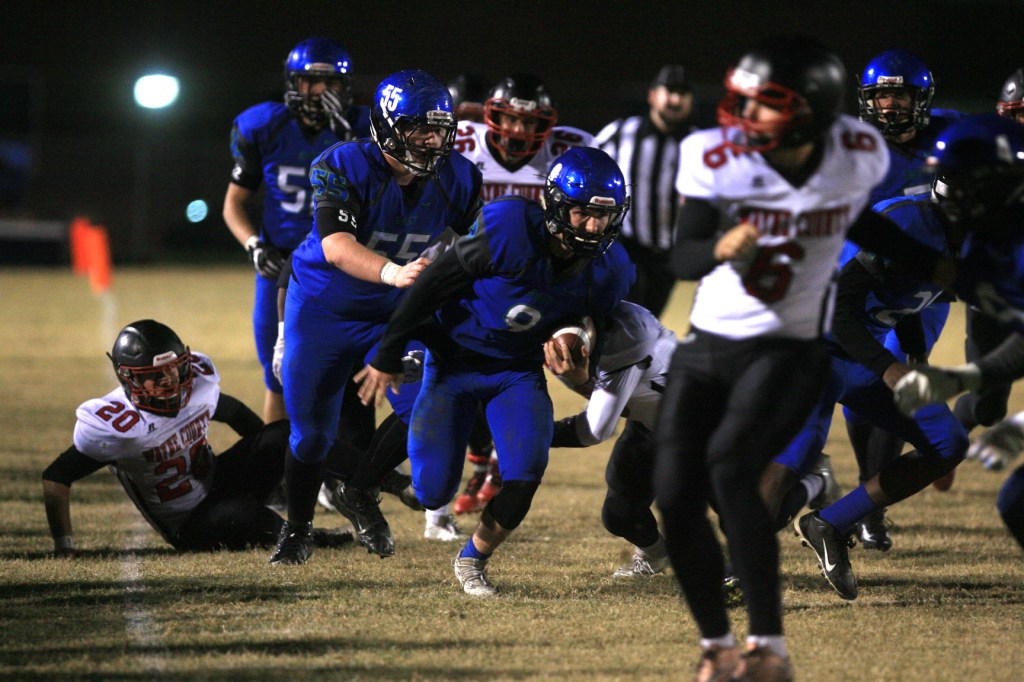 Though the pain of East Jessamine High’s 20-41 loss to Wayne County on Friday during the second round of the Class 4A playoffs will linger for days, weeks and months to come, the team can take solace in the fact that the bar was raised in a season in which the Jaguars finished 8-4 and as champions of District 5.

It’s a bar that progressively inched its way up throughout a season that began with a season-ending injury to its leader, starting running back and 2015 leading tackler, Justin McIntire. Then, facing the prospect of starting the season 3-4, the Jags survived a last-play Mercer County frenzy (30-27) and harnessed that momentum into a five-game winning streak, which the Jags took into the cold, breezy field at East on Friday night.

“They have the tradition and the swagger that we’re trying to get,” East head coach, and District 5 Coach of the Year, Mike Bowlin said of Wayne. “The team that walked in here on the other side is where we want to be. That’s no knock on our program, but we’re not there yet. We played a team we want to emulate. But, I was very proud of our kids tonight. Nobody on my team lied down, and I don’t think anybody came out of the locker room thinking we couldn’t win the game.”

East entered the night intent on riding the reliable legs of senior running back Aaron Fortenbery. After a season in which he finished with 1,614 rushing yards on 296 attempts with 19 touchdowns, the Jags were hedging their bets on pounding a Wayne defense that allowed 1,396 rushing yards through 11 games this season.

Those odds quickly became stacked against East as the Jags struggled to run the ball through the middle of the Cardinal’s defense — Fortenbery recorded 61 yards on 18 carries with one touchdown; Connor Hearn just 37 yards on seven carries, and Desman LaDuke with 15 yards on four carries. East adjusted though, and put the game on the shoulders of the 2016 District 5 Player of the Year, Kyle Gann.

“They were smaller up front, but they were very aggressive,” Bowlin said of Wayne’s defense. “They were really quick. They’re a good defense.”

With bootlegs and sneaks, Gann gashed his way through the Wayne defense. The senior recorded 114 yards on 22 carries for two touchdowns — His first touchdown run was called back because of a holding penalty in the first quarter on the Jags’ first offensive possession of the game. The score would have put East ahead.

Instead, it was Wayne that struck first after Lorenzo Linsey hit Stetson Simpson for a 14-yard touchdown pass on 3rd and 12 with 3:44 left in the first quarter. The Cardinals opened their lead early in the second quarter on yet another Linsey touchdown pass. This time, it was an 18-yard strike to German Ruiz.

“They’re dynamic on offense,” Bowlin said. “Their quarterback is just a phenomenal player. He’s probably the best all-around player we’ve played … The kid can beat you in so many different ways.”

The Jags then showed the fight that Bowlin highlighted upon. With its offense sputtering, East unleashed Gann. On its next offensive possession following Wayne’s second touchdown of the game, Gann burst through the Cardinal’s defense for a 31-yard touchdown run with 9:23 left in the first half.

However, Wayne countered minutes later on yet another Linsey touchdown. This time, on a two-yard run. Gann would block the extra point, but Wayne still led 20-7.

East would cap off an eventful first half with a one-yard Fortenbery touchdown run with 2:20 remaining. Unfortunately for East, the bright spots vanished in the second half. Wayne would hold the Jags to three, three and outs in the final half; two of which were failed fourth down conversions.

The Cardinals would capitalize on the Jags’ offensive struggles as they outscored East 21-6 in the second half to advance into the third round of the playoffs.

In a season that began with switching to a quarterback who hadn’t seen snaps under center since the 2014 season (Gann), to a running back that few expected to become one of the best running backs in the state (Fortenbery), East has surpassed expectations all throughout the year. Yet as Bowlin pointed out, talent can take a team only so far. The weight of success falls on the leadership of those players that are looked upon as anchors of the team.

That leadership has propelled East to 15 wins in two seasons, and should carry over into next season as the seniors depart with a legacy of determination and selflessness left in their wake.