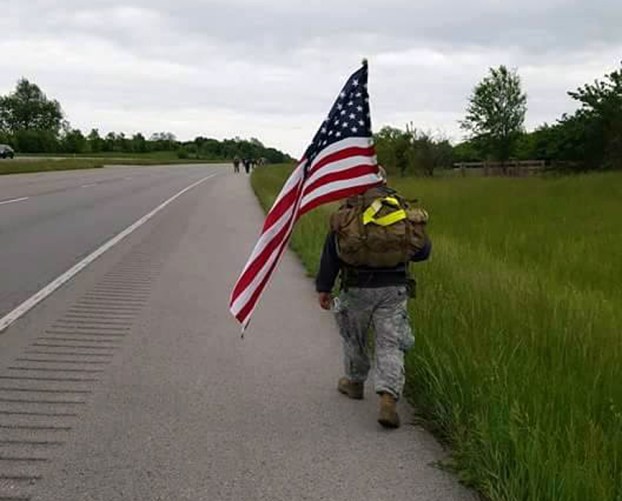 An upcoming event in Nicholasville will allow community members to bring awareness to veteran suicide by physically carrying the weight.

Carry the Fallen is a march that is intended to give participants insight as to what it is like for some veterans. The march, which was 22 miles previously done in Lexington, but the route in Jessamine County is around nine  miles.

“The participants, earlier this year, carried weight on their backs to signify the weight that veterans with PTSD (post traumatic stress disorder) carry on a day-to-day basis. The walk is a struggle inside of itself as well,” said Joe Herrington with Active Heroes and creator of the event.

Active Heroes, a non-profit organization based out of Shepherdsville, creates similar events throughout the country. Herrington said the goal is to bring awareness of the 20 veterans a day that commit suicide.

A Veterans Association based in Lexington found that in 2015, 11 veterans committed suicide in the area. So far this year, the number has already reached 11, Herrington said.

Even if one doesn’t want to “carry the weight” they can still donate to the cause. The proceeds will go toward programs for veterans including free activities that help heal PTSD.

Participants can either register for free or join the event as an active heroes ambassador for $50. The march will begin at Lowe’s in Nicholasville and end at Camp Nelson. Participants can carry as much weight as they deem fit.

“When we start the walk, everyone is strangers, and by the time we finish it’s like everyone is family,” Herrington said.

There will be an opening ceremony before the march, and a closing one where Active Heroes will present patches.

The event begins in the parking lot of the Nicholasville Lowe’s at 6 a.m. and will end at 10 a.m. on Nov. 12. Those who need to register at the event are asked to arrive earlier.

The Jessamine County Board of Education will be welcoming a new member for this year’s term.  After serving as a... read more