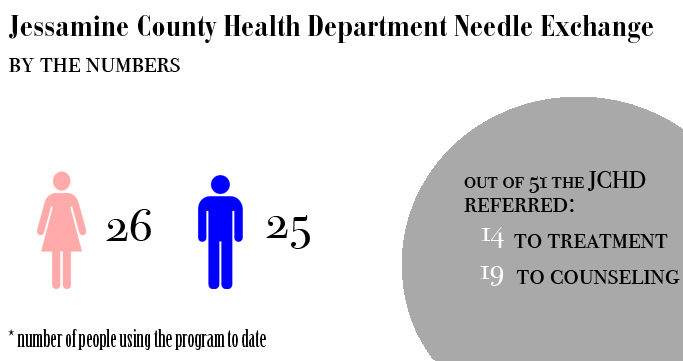 On the same weekend of Hope Over Jessamine Fall Festival — a festival hosted for change in a community struggling with heroin — Nicholasville Police made four arrests related to heroin.

“Heroin in the last year and a half has became a huge problem for us,” Nicholasville Police Officer Kevin Grimes said. “Not only for incidents involving the drug, but also investigations over the overdoses.”

Two of the arrests were on Sunday, Oct. 23 and the other two were on Friday and Saturday.

While there were four arrests in one weekend, eight arrests between the Jessamine County Sheriff’s Office and the Nicholasville Police Department took place in the month of October involving heroin.

“Two years ago we had only a couple arrests a year involving heroin,” Grimes said. “Now heroin has replaced pills.”

But there is a new way to obtain synthetic drugs that is completely legal, John Branscum, Retired Officer and Jessamine County School Board member, said.

“Within the synthetics, they can buy it online and it is shipped right to their house,” Branscum said. “So education is the next component in addition to enforcement.”

People have no idea that you can order things online that will kill you that will go right to your house, Branscum said.

“If it weren’t for the EMS and Law Enforcement carrying Narcan, there would be greater overdoses than there is now,” Branscum said. “This is a thing where we just worried about young people, but now it’s the professional adults too who are using and buying.”

For a community who have lost loved ones to addiction and overdoses, the epidemic doesn’t seem to be slowing down, especially for law enforcement.

“Laws have been adopted in an attempt to stop the flow of these deadly chemicals into the United States,” Branscum said. “Unfortunately, laws alone will never stop this or any other illegal activity where people profit billions of dollars. I have been conducting educational workshops for educators, law enforcement and parents for many years, and I have seen this epidemic get worse.”

While lawmakers and law enforcement are looking for change, there is one program in Jessamine County that is helping those addicted to heroin to stay as safe as possible.

The Needle Exchange Program, where used needles are exchanged for clean and sterile ones to slow the spread of hepatitis and HIV at the Jessamine County Health Department, is open on Mondays from 1 to 6 p.m., and the program is completely anonymous.

“We have serviced 51 unduplicated clients, 25 male and 26 female,” Shana Peterson, of the Jessamine County Health Department said, “We have referred 19 participants to counseling and 14 to treatment.”

Peterson said the primary drug of choice is heroin for those utilizing the Needle Exchange Program.

“Hepatitis C and HIV testing are offered to each client every time they come,” Peterson said.

“Hopefully this program is enough for just one person to receive a spark that will turn them around,” Corman said, “this is more of an epidemic than anything.”

When asked what law enforcement can do to combat the epidemic, Corman said, “It’s very tough to police a habit. A lot of professionals in the justice system have been told jail time doesn’t rehabilitate a habit. A person just has to realize they need a change.”

In the last several months, there have been three different groups pop-up to establish some rehab centers right here in Nicholasville where people can get help if people need it, Corman said.

“We are currently working to establish a rehab program within the detention center,” Corman said. “There is no better time, in my opinion, to get help. At the same time, it is wishful thinking to think any one thing is going to stomp out the problem we have with drugs.”

As long as there is a demand, there is going to be a supply, Corman said.

“You can’t help someone with a problem until they truly want help,” Corman said. “We have seen people treated for an overdose, only to die from another overdose a few days later.”

After a drug bust the Sheriff office would feel like they made a dent in the problem.

“However, the drug problem is driving 70-80 percent of the problems we have, like that of theft and other situations,” Corman said. “I feel like the problem is bigger than one man or any law enforcement agency, it is so vast. One minute you are dealing with a business man who has a drug problem. The addiction doesn’t play favorites.”

What can be done?

Corman said, that a lot of professionals who run rehab programs are realistically satisfied with a 10 percent success rate.

“If you can save one adult, it is worth it,” Corman said. “But we are going to continue to fight.”

Corman isn’t the only one who feels that way.

“The lives we are fighting for are precious, and it will take all of us working together to make a difference, Branscum said. “One of the ways to help slow the epidemic is to get the word out and educate parents, educators and students.”

One way to be educated in the epidemic is to understand the signs of addictions and that synthetic drugs can be bought online.

“It’s hard to see a way we can get ahead of it,” Branscum. “The bottom line is that we can never give up.”