Organization encourages students to stand up against bullying 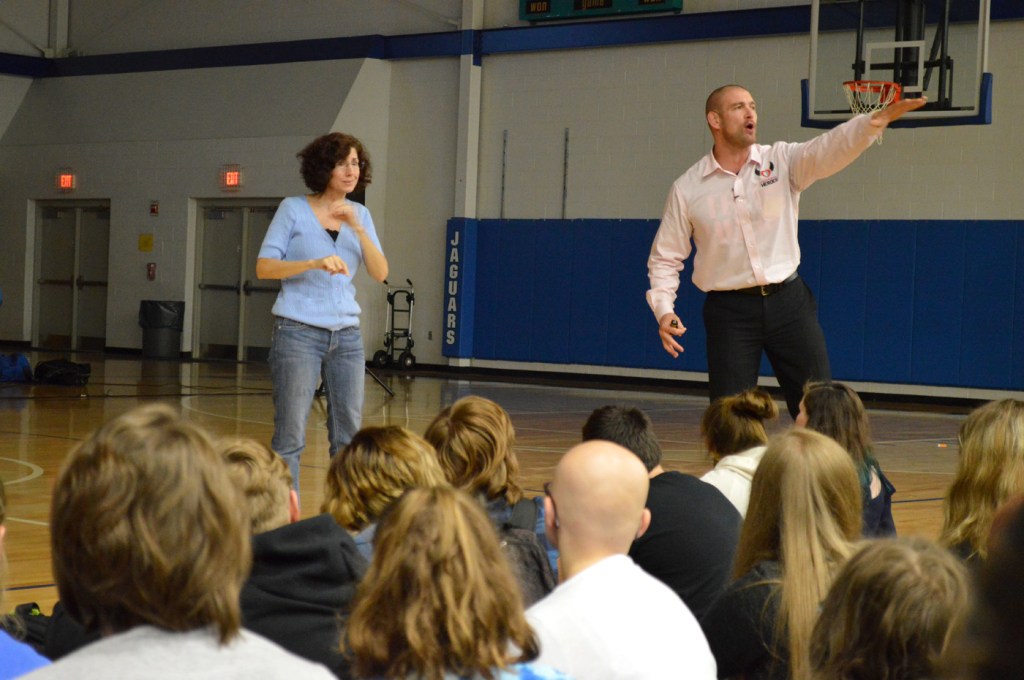 Sweethearts and Heroes were back in Jessamine County last week,and this time it was for the students.

Tom Murphy, a former professional MMA fighter, and Rick Yarosh, a retired sergeant with the U.S. Army who was injured in Iraq and has burns over most of his body, visited several Jessamine County schools this past week to share their action-based, bystander empowerment, approach to bullying with students and staff. Their organization, Sweethearts and Heroes, has presented to more than one million students in several hundred schools across the country, according to a press release from Jessamine County Schools.

The group visited the county at the beginning of the school year to show teachers and staff the presentation for their superhero-themed opening day.

Sweethearts and Heroes’ last stop of the week was East Jessamine High School on Thursday to a gym packed with freshmen and sophomores.

Before the presentation, Perry Foster, a Sophomore at East Jessamine High recited “To This Day,” a poem written by Shane Koyczan about bullying and how words do hurt.

“If you can’t see anything beautiful about yourself get a better mirror,” Foster said.

When foster finished the poem, the room went dark and Tom Murphy’s UFC fight scenes played from a projector.

Murphy told students he hates fighting. He said Mixed Martial Arts is an aggressive sport that stems from competition not violence.

“I never solve my problems, and I never will, in that way,” Murphy said.

Murphy defined a bully as a person who uses strength or power to habitually harm or intimidate those who are weaker. It’s an intentional act, he said. But the definition of the word was not always a negative one.

In 1530, when the word was created, bully meant “sweetheart.” He told the crowd of students that you can bully someone in the right way. Like a coach would encourage a player to do his best, and then keep pushing him to do better.

Murphy listed the different types of bullying such as verbal, physical and cyber.

He said 96 percent of the time, bullies get away with their actions, which, usually take place in front of other people, and 100,000 students will leave school this year because of the way they are treated there.

Half a million to a million students attempt to commit suicide every year, he said.

He offered a solution in the form of five bully buttons, Perspective, H.O.P.E., Sweethearts, Jump Into Action, and Be a Hero.

To demonstrate perspective, Murphy invited a student onto floor and asked him to balance a stick with two fingers for 10 seconds. The catch was the student had to look at his fingers. Within two seconds, the stick fell to the floor. When Murphy told the student to change his perspective and look at the top of the stick, the student did the act with ease.

Another student was invited to the floor to demonstrate jumping into action.

He was asked to jump as high as he could, with all he had and leave a mark on the wall. The first mark was well above the basketball goal. Then Murphy said the student lied because that was not all he had. With the gym filled with the sounds of encouraging stomping feet the student exceeded his previous mark.

Murphy offered an ABC action plan for students to be a hero when they come across bullying.

Take the person being bullied Away from the situation, Be that persons Buddy and Confront the situation by telling a teacher or speaking with the bully.

The acronym H.O.P.E. stands for “Hold On, Possibilities Exist.”

“You may not recognize it yet, but you possess the H.O.P.E. that many seek,” Yarosh said.

Yarosh told the crowd his story of how he survived an explosion caused by an IED – Improvises Explosive Device, when he was in Iraq. He said after he managed to jump off the vehicle, the fire covering his fuel drenched clothes and body refused to go out when he rolled on the ground.

“That moment I gave up,” Yarosh said.

Luckily, he only gave up for a split second because he eventually rolled into a close by canal.

He spent six months in the hospital and endured several surgeries. He lost one of his legs.

After he got out of the hospital, Yarosh said children were scared of him and he said he understood why, but that didn’t make it any less frustrating.

One day while at a restaurant, a little girl kept staring at him until eventually her grandfather told her to go say hi to him. Though she was hesitant she eventually came over to him. In the nicest way possible, Yarosh said “hi how are you doing.” He said the little girl ran back to the table with her grandfather. At first he thought he scared her.

“I hear her whisper to her grandfather, ‘grandpa, he’s really nice,’” Yarosh said.

He said that little girl’s acceptance gave him the hope he needed.

“I will take hope from whoever wants to give it to me, and I will give it to whoever needs it,” Yarosh said.

Yarosh was accompanied by his service dog, Amis, who was trained to become a service dog for veterans in a prison. Amis performed a few tricks for the crowd such as assume the position, hands up and lay down.

Murphy finished the presentation by reading a poem he wrote about the 10 second window bystanders have to intervene when someone is being bullied, he called it the “Moment.”

“The moment a hero breaks whatever it is that has become their 10 second barrier, a sweetheart is born as hope’s last carrier,” he said.

Superintendent Kathy Fields said she enjoyed that most of  the presentation was about how students and bystanders can intervene with bullying, and how they can become a part of the solution.

“I think that it gave out students the tools to combat bullying,” Fields said. “Tools that they probably didn’t know they had.”

Typically, a presentation like that would cost upward of $5,000 for each school, she said. But thanks to sponsorships from Sam Terrell — a parent of a student at East Jessamine Middle School and OmniTRAX — a railroad and transportation management company — it was at no cost to the schools.

Fields said she would like to invite Sweethearts and Heroes back in the near future to talk to the elementary schools.

“It enables our kids to stand up and make a difference,” she said. “And I love that.” 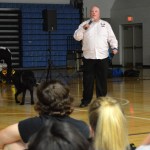 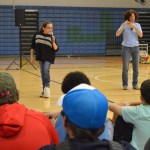 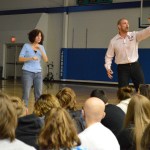