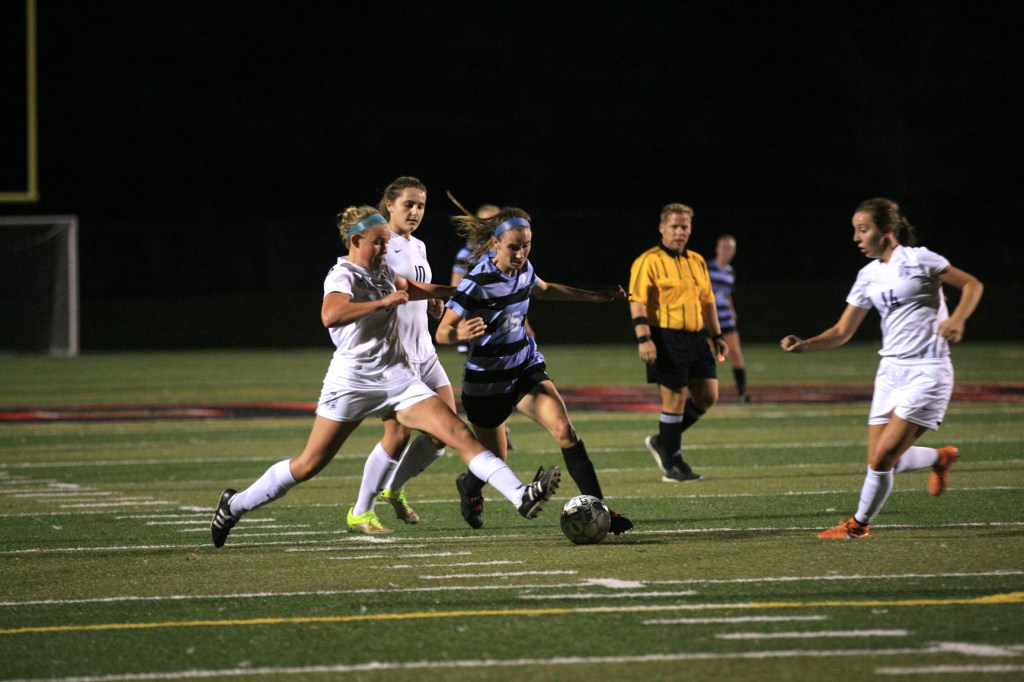 To anoint the West Jessamine girls’ soccer team as a team of destiny, you would first have to admit that the Lady Colts were advancing through the 2016 state tournament as a team miraculously defeating teams of superior talent.

And in that same frame, you would in essence be admitting that West is not of the same caliber as a Notre Dame or Sacred Heart.

But when Wednesday’s semifinal game rolls around only four teams will take to the pitch in the hopes of advancing into the state final. Of those four teams, none will be Notre Dame or Sacred Heart.

Because each has fallen victim to the methodical nature that is the brilliance of West. Sacred Heart fell into that trap on Saturday after a match in which the Valkyries had the Lady Colts on the ropes throughout the vast portion of the second half; however, the quick-strike Lady Colts punched their ticket into the Final Four after Eva Mitchell’s goal on an assist from Anna Lee with 2:15 remaining in the game.

Eva Mitchell sneaks it though in the 78th minute! West Jessamine is 2:12 from a state semifinals trip. pic.twitter.com/OvEFcCF9HA

“They did possess the ball probably like 70 percent of the time,” Lee said of Sacred Heart. “But when we got our opportunities, we definitely made them.”

With a team loaded with top-to-bottom talent throughout the backline, midfield, keeper and forwards, West is not a team of destiny; West is a team that is in control of its own destiny.

“I’m proud of everybody here,” West head coach Kevin Wright said to his players following the victory. “Y’all never quit. You never thought, “You know what, this is good enough. If we lose 1-0 or 2-0.’ No. We’ve beat the top five. Now we move on.”

Yet despite the victories, the Lady Colts sure know how to place fans on the edge of their seats.

Thankfully, West has arguably the best keeper remaining in the tournament, Anna Rexford. Despite the fact that Sacred Heart had the size advantage up front, Rexford was able to out leap and parry away each of the five Valkyrie corner kicks and 10 shots (six on goal).

Rexford finished the match with six saves. Since the start of the 46th District Tournament, the Lady Colts have a goal differential of 23-2 with four shutouts.

However, a Sacred Heart corner kick in the waning moments of regulation was just a wayward bounce away from altering the course of the match. After Rexford slid out from the goal to deflect the incoming ball, the ball bounced into a crowded box just feet from the goal. But the backline of West happened to be in the right place at the right time and booted the ball clear of danger.

Just minutes later, Lee would hit Mitchell streaking down the left side of the pitch. After stretching out her left leg to corral the ball, Mitchell booted her seventh shot of the game, and in that moment, Stodghill’s luck wore out as the ball squirted just past her diving attempt for a goal that sent West into a state tournament Final Four match against Simon Kenton.

“I saw Anna (Lee) running to the right of me and she gave me a great one two-ball back; couldn’t have been a better ball, and I just poked it in,” Mitchell said of her goal. “… I missed so many; I took like six shots, and I finally made one. I was like, ‘I’m getting this next one.’”

The win was the first time a team has defeated Sacred Heart and Notre Dame back-to-back in the state tournament.