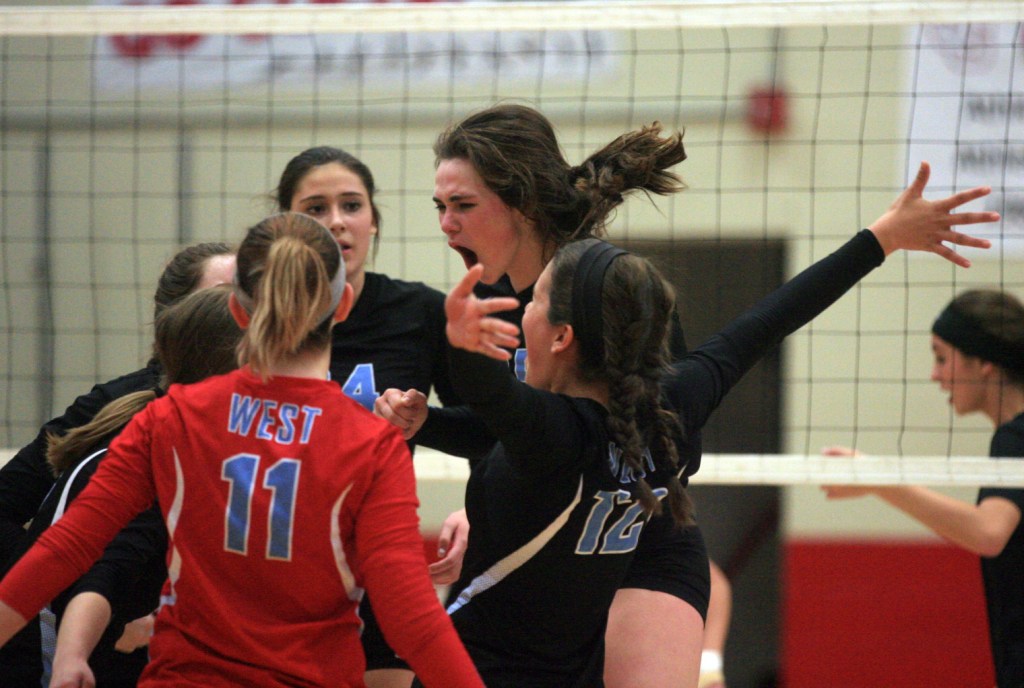 The West Jessamine High volleyball team has accomplished what no other Lady Colts team has done since Jessamine County High broke apart into East and West in 1997, win a region title and advance into the state tournament.

And on Nov. 4, the Lady Colts will look to do what no other public school has ever done, win a state championship.

In the meanwhile, West can rejoice after a postseason in which it lost just one set (15-1, the only set loss came against Pulaski County). The Lady Colts will now take a 10-game winning streak into their state tournament match against 14th Region champ Letcher County Central.

West advances to its first ever state tournament after downing Pulaski 3-1. Lady Colts have lost just one set all postseason. pic.twitter.com/htmGJa7itd

“I’m tickled to death for them,” West head coach Bill Bird said amid the vivacity of fans, families and players that stormed the court following the award ceremony. “I wanted this more than anything for them. This group of girls have worked their behinds off all season.”

Ever since West moved into the 12th Region before the start of the 2012 season, the Lady Colts have been at the mercy of either Southwestern or Pulaski in the region tournament — West had lost to one or the other in the semifinal round each year, having won no more than one set each match.

That trend is no more after West proved to all that a regular season schedule loaded with tough opposition pays dividends in the end compared to a team with a stellar record, yet has faced few worthy opponents.

The quality of West was apparent from the onset as the Lady Colts bolted out to an early lead in the first set. Of course, volleyball is a game of give and take, which was evident as the Lady Maroons pulled even at 11; however, West would prevail to take a first-set victory, 25-20.

The pendulum swung Pulaski’s way in the second set after the Lady Maroons rallied to pull even at 14-all. They then took a commanding 19-15 lead. But with a Pulaski set point staring at West with the Lady Colts down 24-17, West fought back to pull within two points at 24-22.

However, Pulaski had just enough gas to edge out West, 25-22. Yet, the toughness of West’s regular-season schedule was designed for moments such as this — moments of adversity and how to adequately respond.

The third set was in much of the same mold as the first two sets: close and competitive throughout. Facing yet another mid-set deficit, West turned to All-Tournament recipient Annalyn Weitekamp, who stabilized the team and served the Lady Colts back into the lead at 15-11.

West would ultimately take the third set, 25-16, which placed the Lady Colts one-set win away from taking their first ever region crown.

“When we went into that third game, coach Stewart came over to me and we talked about gaining that momentum,” Bird said. “We knew that just getting those seven or eight points would carry us on. After they came out in that third game, they were just more focused.”

The Lady Colts were not about to let Pulaski stake its claim as region champs. As a result, West blew past Pulaski, 25-12, in the fourth and final set, with the winning kill going to All-Region and All-Tournnament award recipient, Tess Perdue.

Following the kill shot, it took a moment for the team to realize that the ball had landed inbounds, but when the girls grasped the situation, the realization of a season of hard work, numerous practices and road trips had paid off in the best possible way — In a 12th Region Tournament championship victory.

Final – West claims its first ever 12th Region championship after cruising past Pulaski in the 4th set 25-12. Lady Colts advance to states. pic.twitter.com/tOm4J0t3MP

“I had a video we were watching earlier,” Bird said. “That Secretariat video, where he ran in the Belmont (Stakes), and he just keep on stretching and stretching and stretching (his lead). I’d go into the huddles and I’d say, ‘We’re rounding that turn let’s pull it off.’ That’s what they did. They stepped it up. They went into that fourth game and just kept getting stronger as we went.”

The race continues on for West as it now travels into the belly of the Kentucky high school volleyball beast, Louisville; a city that is home to the past 21 state tournament champions.