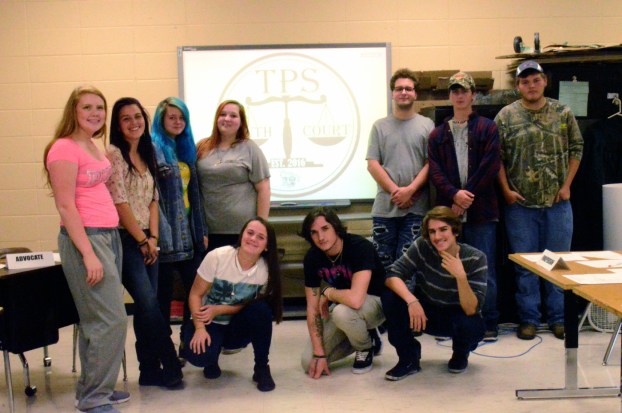 Youth Court is in session at The Providence School

A student gets in trouble during class, he becomes agitated and tries to leave the room, but the teacher stands in his way, he pushes her as he leaves the classroom in fury. In most schools, this situation would be dealt with in a traditional way, either by the principal or another administrator. At The Providence School in Wilmore, one leadership class provides another option.

Those who commit in school offenses, such as skipping or disrupting class, can attend the Youth Court that consists of a bailiff, an advocate, a judge and eight jurors who collaborate on a constructive disposition.

Diversion into the Youth Court is an opportunity for students to avoid traditional punitive consequences for in school offenses. Before being diverted into Youth Court, the student must sign a Respondent Oath of Confidentiality stating they will not discuss the case outside of the courtroom, and a Diversion Agreement stating that they will accept the disposition given by a jury of his or her peers without ill feelings.

Youth Court operates on similar rules as a standard courtroom setting. The respondent — a student who has admitted to a school offense — is escorted into the room by a student advocate. The judge then reads the required statement to the courtroom. After the clerk presents the facts of the case and the past digressions of the respondent, the advocate defends their client to the jurors.

The floor is then given to the respondent, who gives his or her reasoning for doing what they did to end up in Youth Court. The jurors then ask questions such as. Who do you think your actions hurt. How are you doing in school? What do you think you could have done differently? What should you do to repair the harm that was done?

Once the the jurors receive their answers from the respondent, everyone leaves the room so they can deliberate. All jurors must be in a 100 percent agreement on the decision made. Once they reach that decision, they present it, along with their justification of why they came to that decision and the disposition – a consequence” or restorative justice plan a student must complete following youth court – aloud to the courtroom.

The dispositions can rage from a written apology, time with a counselor, keeping a record of class time and jury duty.

Once the disposition is completed, any record of the offense is removed for the student’s discipline file. If the student does not accept and meet the disposition given, the case will be referred to an administrator and the student will receive traditional in school consequences.

Justin Cross is on his second of three jury duties he must participate in to complete his disposition. He said participation in Youth Court has opened his eyes to how consequences should balance out with offenses and how students can help other students find new ways to cope with their actions.

“It helps me think about fairness,” Cross said.

Though some are in the jury because of disposition, most are there because they volunteered to be for the leadership class. The judge, advocate and bailiff are also all volunteers.

Youth Court was started three weeks ago by Joseph Mau, a teacher at The Providence School. So far, six official cases have been heard and several mock trials, based on past year offenses, have occurred for practice.

“This seemed like an excellent way to resolve some of the behavioral problems at the school,” said Harley Sinclair, co-teacher of the leadership class.

A student court had been brought up before, but Mau was the first to ever actually follow through with it.

“Mau is the one that cared enough to organize it all,” Sinclair said.

In his four years of teaching at The Providence School, Mau noticed traditional discipline was not as effective.

“I wanted to see how students would want to help each other,” Mau said. “So that they could grow instead of just being disciplined for their actions.”

The Youth Court started off as just a unit Mau was going to teach in his leadership class on problem solving and conflict resolution. He saw videos of a youth court in Pennsylvania and decided to try it out in his class room.

The students’ reaction and excitement toward the activity, caused Mau to request it be made into a program.

“In a lot of ways, it’s turned out better than I expected,” Mau said.

Like most new programs, there are a few kinks to work out. Mau said he wants to get the concept of punishment out of the students heads and replace it with creative ways to help each other grow.

At the moment, the Youth Court takes place inside the leadership classroom. It sees cases from the high school about four times a week. Usually only one case is heard during the 45 minute class.

Kyle Bishop has acted as a respondent in a mock trial, been the judge, the bailiff, an advocate and a member of the jury — which he said is his favorite part because he gets to get the truth out of the respondents.

“It’s getting more personal, and they’re actually trying to help you when you make a mistake,” Bishop said. “I think it’s pretty awesome.”

The Wilmore City Council heard two conflicting viewpoints concerning the revision of the Development Plan for Roseglade Farm at the... read more