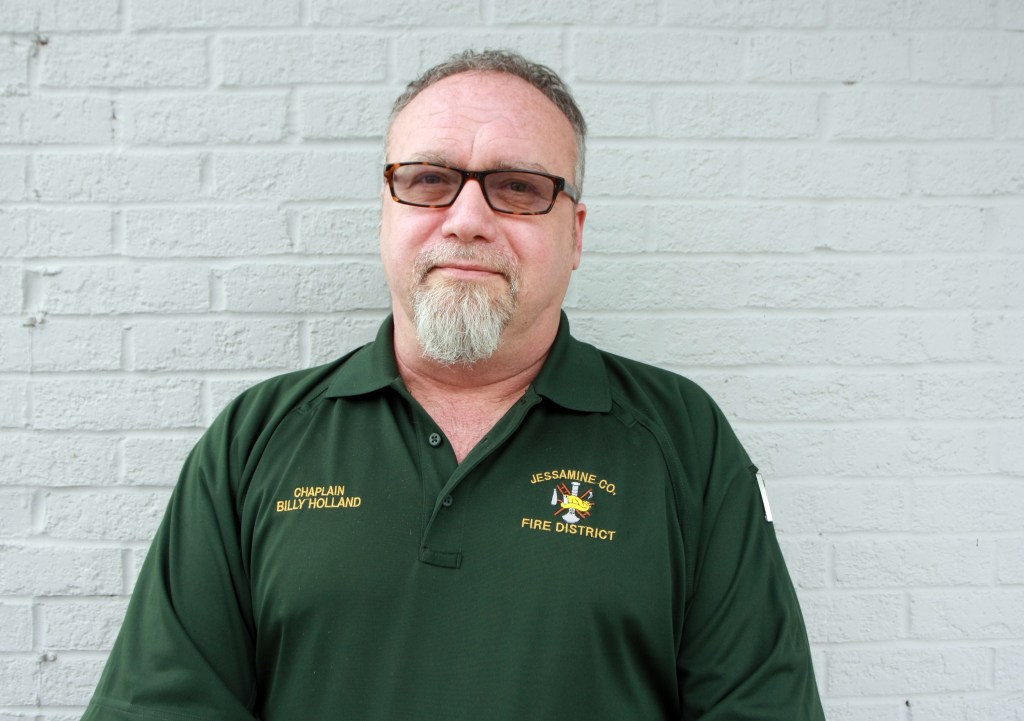 One local man has many titles:  chaplain for the Jessamine County Fire District, an outreach minister and a Jessamine Journal columnist; however, on Wednesday afternoon, Billy Holland was a calm citizen who walked into the wrong place at the wrong time.

Holland was passing out flyers for the Jessamine County Fire District’s Annual Food Drive for the Needy when he walked in on a robbery occurring at the Dollar General in Nicholasville.

“The man at the door had a bandana on. I thought maybe he just had allergies,” Holland said with a chuckle.

Holland realized what was happening after seeing one of the robbers holding a gun and stuffing cash into his pocket.

“I had a split second to figure out what I was going to do,” Holland said. “Since I was holding flyers in my hand, I asked the cashier, who was trembling all over, if I could place some flyers related to the food drive, and she replied yes.”

As Holland was speaking to the cashier, he noticed the robber, who was previously behind the cash register, walk behind him.

“I wasn’t sure what they were doing, but I didn’t turn around or look,” Holland said. “I felt them brush by as they walked out the door and then started running.”

The robbery took place around noon on Wednesday, October 19, at the Dollar General on South Main Street.

“I could be in the hospital with a bullet to the lung,” Holland said. “The robber came so close that I thought they might try take my wallet as an added bonus, but did not.”

Looking back on the incident, Holland said he is glad that he stayed calm and collected.

“My father did have a weapon, but had left the firearm in his vehicle,”  Billy’s son, Joshua Holland, said in a letter to the editor. “He was dressed in his Fire Chaplain Polo shirt and looked somewhat official, enough to make the assailants appear increasingly nervous.”

Holland said many people he has spoken with about the situation claimed that they would have acted differently.

“Some said they would pistol whip the guy, shoot them and other things,” Holland said. “But what if they were 15 years old? What if they really had a fake gun? Is it really worth it to die over $218?”

Even addressing these individuals in such an adrenaline pumping moment could have escalated the already tense transaction.

“Drawing a weapon, or charging the suspects would have certainly ended in horrific gunfire,” Joshua said. “Not only did my dad make the right decision, but one might even call it a divine intervention of sorts.”

Nicholasville Police Officer Kevin Grimes said that if one should walk into a robbery, they should act as a great witness and just comply with the robbers.

“That’s the best advice I can give for that,” Grimes said.

The police department has received many tips that they are following up on, but as of now have nothing solid.

Holland said he believed the robbers were both African American males and both wore hoodies with bandanas over there faces.

If any information is known regarding the robbery contact the Nicholasville Police Department at 859-885-9467.