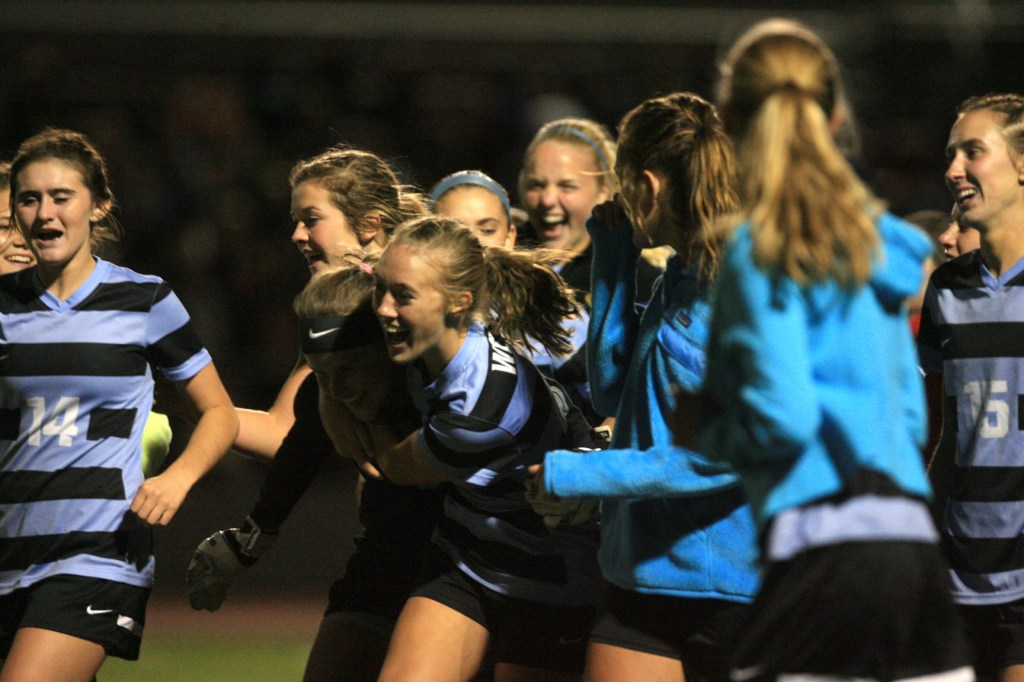 With baited breath, the throng of West Jessamine girls’ soccer fans watched as their freshman keeper, Anna Rexford, eyed up the Notre Dame player and prepared for the shot that would either continue the pressure cooker of one-for-one penalty kicks, or send the Lady Colts into an Elite 8 showdown against Sacred Heart.

In that moment on Monday, West head coach Kevin Wright never once doubted the outcome.

“One time,” Wright said as he watched the Notre Dame kicker approach the ball and send it flying towards the right goal post.

That’s all Rexford needed, just one opportunity. With an uncanny ability to discern where the ball will go, Rexford dove right and parried the ball back to the Lady Pandas’ player, sending West into the second round of the state tournament and causing pandemonium throughout the Dixie Heights High School football stadium.

Final – A legend in the making: Anna Rexford saves the game after her save in one-for-one PK's. West advances into the Elite 8. pic.twitter.com/B2asQiO8oY

“When you work that hard, and you’re that invested, and you give all you’ve got, it’s a shame that somebody had to lose,” Wright said following the thrilling 2-1 victory.

It was a fitting end to a game that saw two top 10 teams battle with heart and passion all throughout the night. However, the opening half indicated little of what was to transpire later in the evening as the two teams were locked in an early defensive struggle that saw Notre Dame dominate the time of possession, shot attempts and corner kick opportunities.

Yet despite West playing on its heels in the first half, the Lady Colts utilized their speed in the second half to counter, and then maintain a 1-1 tie into extra time.

It would be safe to assume that West would have spent the long bus ride back to Nicholasville wondering about the what ifs had it not been for the brilliance of Rexford. Of course, not all the praise can be heaped upon one player. The Lady Colts’ defense was stout all throughout the game thanks to a strong back line that bent, but never broke.

That back line of West showed its meddle against a tough and talented Notre Dame squad, which enabled the Lady Colts’ offense to gather momentum late in the second half. As a result, West was able to counter the Lady Panda’s goal with 25:50 left in the game with an Eva Mitchell equalizer just seconds later.

“Talk about some meddle,” Wright said. “Give up a goal on the road. The crowd difference was huge for them and we come back in eight seconds to score a goal.”

West would have several more opportunities to take the lead late, but Notre Dame survived due to the play of its keeper, just as West survived thanks to its players stepping up and proving, as Wright often says, that quality triumphs quantity.

And the Lady Colts have quality all throughout the pitch.

The two teams would then fight through two golden goal extra five-minute periods before they squared off for penalty kicks. There, Rexford provided the encore to what ended up being a display of masterful goalkeeping on the night.

Her three saves in the first round of PKs sent the game into the one-for-ones, and there, Rexford rose to the challenge and sent the Lady Colts into the Elite 8.

“I believe in my team,” Wright said. “I’m proud of every kid that we’ve got. It’s total team. There’s strength in numbers. That’s what it is.”