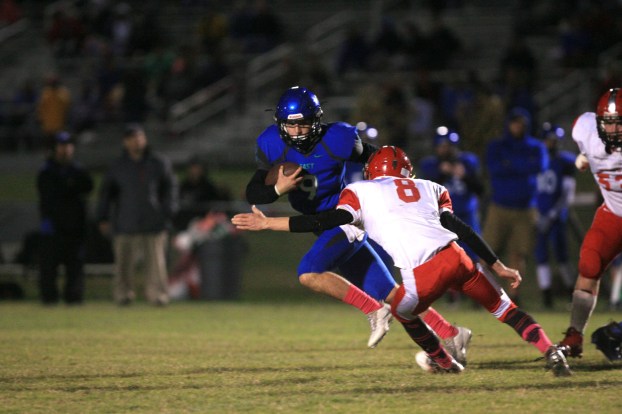 Take notice, if you’re an opposing team with East Jessamine penciled in on your schedule following a bye week, chances are that you’re going to lose.

West Jessamine fell into that trap on Friday in a thrilling 20-16 loss in a game that showcased the rising talent throughout both programs led by the 31 carries for 168 yards and two touchdowns of first-year running back, and senior, Aaron Fortenbery.

Aaron Fortenbery inks his 1st TD of the night after this five-yard run gives East a 14-7 lead with 1:10 left in the half. pic.twitter.com/UHcWKlBKQz

“I think our coaches have a really good eye for talent and where to place kids,” East head coach Mike Bowlin said. “I have to take credit for putting Fortenbery at fullback. I just thought that was something we needed to do. I never in a million years dreamed that he would be a guy we give the ball to 30-35 times a game. He’s an absolute warrior.”

The victory for the Jags was the third straight win over a team that entered the game coming off a bye week (Taylor, Marion and West). The victory also solidifies a program-first undefeated record in district play (4-0).

East has now defeated West two consecutive times, which follows a four-year span in which the Colts won three out of four games between the two crosstown rivals. However, unlike last season’s 47-0 victory over West, East faced a Colts team that has shown tremendous growth throughout this season.

That growth was on display as West hung with the District 5 champs. Even though East was able to bleed the clock on long, methodical drives led by Fortenbery, Kyle Gann and Connor Hearn, the Colts’ defense remained stout throughout the night.

That was evident on the first East drive of the game; a drive in which Fortenbery scored, but the touchdown was called back on an offensive facemask penalty. With East still in the redzone, West hung tough, forcing the Jags turn the ball over on downs.

East would eventual score first after Gann snuck it from a yard out early in the second quarter to give the Jags the 7-0 lead. Gann finished the game with 11 carries for 48 yards and one touchdown. He went 0-for-2 in the air.

West evened the game up at seven midway through the second quarter after Marcus Jones’ 32-yard scamper preceded a quarterback sneak that breathed life into the Colts.

Jones finished the night with two touchdown runs and threw for 64 yards.

“We played real heavy on the pass,” Bowlin said of his defense. “But early in the game they ran the ball on us a lot.”

Most of the West damage came from the speed and elusiveness of Jamesy Swentzel. But with East focused on shutting down the size and talent of Greer Stone, the Colts were pressed to find other playmakers, which played into the hands of East.

“West has a good football team,” Bowlin said. “They bring it, and they’re well coached.”

The Colts had several opportunities in the fourth quarter to score, and even pull ahead, but the nearly perfectly-placed balls by Jones were either dropped in or near the endzone on two separate occasions.

West would narrow the lead to 20-16 with 2:29 left in the game, but East bled out the clock to take the victory and will now face Russell County on Nov. 4 in the Class 4A Russell Athletic/KHSAA Commonwealth Gridiron Bowl.

“My coaches work extremely hard and we demand a lot out of our players,” Bowlin said. “And they really brought it and they earned this season. I’m proud of them and happy for them.”

East hosts the Corman trophy. Jags will next host a playoff game on Nov. 4. pic.twitter.com/jEXe25Sk3j

West surpasses expectations, but falls short of region title in 2-0 loss to Mercer