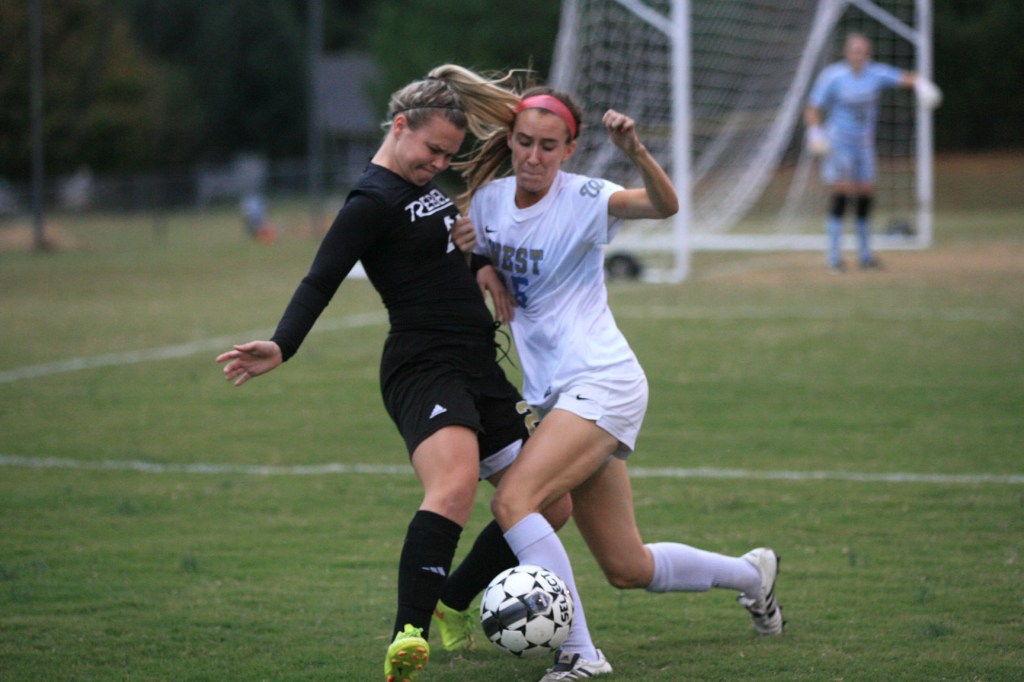 It would be wise to preface this article by stating that the West Jessamine and Boyle County girls’ soccer teams are not to fond of one another. The postgame antics, and the lack of a team handshake following the match on the part of Boyle, would attest to that statement.

It’s a common ground found between the two 12th Region rivals that are forced to face another in what seems to be a yearly brawl for the opportunity to reach the KHSAA state tournament.

This season, the pendulum swung West’s way as the Lady Colts weathered an hour-and-a-half lightning delay on Thursday to defeat Boyle 2-0 in the 12th Region championship game under a cold, persistent rain at Southwestern High.

“Every one of these kids worked their tail off,” West head coach Kevin Wright said at the conclusion of what became contentious final few moments of the match. “We just stayed in the moment.”

With the win, West has now bested Boyle in the 12th Region championship game two out of the past three seasons.

The two teams have not faced one another in the regular season in years, so the match for West was an opportunity to avenge last season’s 0-1 loss at the hands of Boyle in the same region finale. And the Lady Colts made sure not to squander that opportunity.

Before the rain arrived in the second half, the first half consisted of two state powerhouses that were forced to slug it out for just one spot in the state tournament; both teams ripped off shot after shot, all of which just either missed high or missed just wide.

Those shots that did manage to find they way into the realm of the keepers were either parried away or snagged by the excellent play of both the West keeper, freshman Anna Rexford, and the Boyle keeper, Sarah Burns.

Anna Rexford put her whole body into this save. pic.twitter.com/7R9VbKJu2g

“Oh my gosh,” Wright said at the mention of Rexford. “Freshman, six foot and making parries.”

As a result of the great keeping on both sides, the two teams entered the half scoreless with West leading in shot attempts, 12-5.

The second half kicked off with bang after West’s Eva Mitchell booted a shot that was deflected away at the last moment by a leaping Burns. Then, the weather, in the form of lightning and pouring rain, arrived. What followed was over an hour lightning delay that subsided into a misty rain that slicked up and puddled the field.

“We tried to get them to play Saturday,” Wright said of the possibility of postponing the match. “They didn’t want to come Saturday. So you know what, we’ll play them now. Beat them in their weather.”

And beat them West did.

(Boyle contended that playing on Saturday wouldn’t be practical, as the girls had SATs).

Despite players slipping and sliding, and balls magically stopping on a dime in puddles, the Lady Colts utilized their speed and finesse until Mitchell broke through with 27 minutes remaining in the game.

“Honestly, I thought (West) did a better job at possessing and playing with their feet than we did,” Boyle head coach Brian Deem said. “We kind of panicked a little bit and I’m not sure why. Could be the energy and excitement.”

Boyle would still fight back; however, the Lady Rebels had no answer for the play of Rexford in the box. And with just under four minutes left, Maryah Jones cemented the victory for West after the ball instantly stopped in a puddle just above the box, confusing the charging Boyle keeper, which allowed Jones to lob the ball past for the 2-0 lead.

“I’m proud of my kids,” Wright said. “Just a few seniors, but it’s quality of quantity. For 80 minutes we put it on them. But (Boyle) had a heck of a year, played hard. We beat a good team. But, I’ll take my bunch anytime and anywhere.”

Wright will now take his bunch into the state tournament, a feat West accomplished in 2014 when the Lady Colts made it into the second round before falling to Owensboro Catholic 0-1.

Boyle, on the other hand, concludes its season with two losses; both of which came against top 10 teams.

“(Wright) has a great team,” Deem said. “With Mitchell and them, they’ve got the ability to do some great stuff in the postseason.”