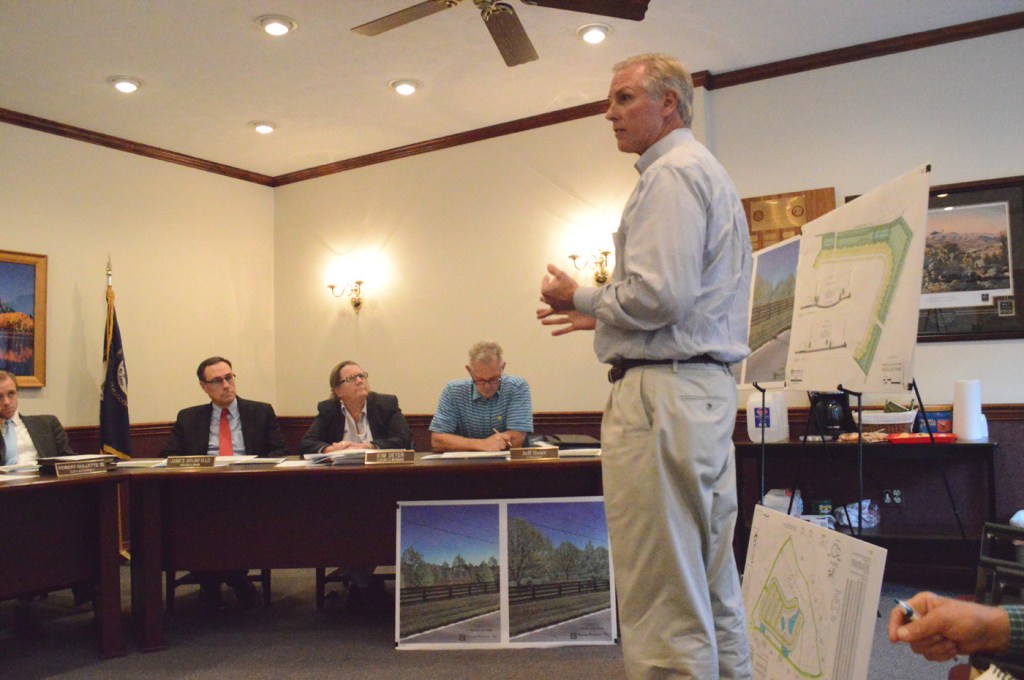 The Wilmore City Council heard two conflicting viewpoints concerning the revision of the Development Plan for Roseglade Farm at the meeting Monday night.

The three men proposed a change to the Development Plan that was approved in 1997. The plan originally had 175 houses on the 43 acre property, located in the southeast corner.

In the new proposal, the houses would be moved to the northern most corner, closer to the Y intersection. This would move the Conservation Easement of about 100 acres of protected green space to the southern part of the farm.

Everything in the 1997 development plan would still be a part of the designing features of the new 2016 request. Stipulations such as lot sizes, house sizes and other factors would remain the same, Simpson said.

He said the new plan is better than the old because location preference has changed in the last 20 years.

At this moment, those coming into Wilmore are welcomed by open green space that is protected under the Conservation Easement. Under the revised version it would be a horse farm with barns.

Simpson described the current open space as not being functional, he said having a horse farm would not only make it more functional but also more marketable.

“The development we’re proposing will be a higher end, higher quality, more appealing, more successful, with more restrictions on the type of product that will be there and a much more extensive landscaping feature than what was there before,” Simpson said.

Gullette was the city attorney at the time the 19-page Conservation Easement document was approved in 1998, and he said it was one of the most controversial topics he encountered during that position.

Gullette argued that the document protected the 100 acres from further development for a reason.

To change the green space would be derating the conservation area, he said.

He then read numerous parts of the Conservation Easement to the council.

One of Gullette’s concerns was the current Development plans allows for recreational areas on the farm if the council wished for them to be there, the proposed revision would no longer allow for that option.

“Don’t go into the election having to explain to everybody in the community why you have opened Pandora’s box on what was a nightmare to the prior council,” Gullette said.

The two sides were accepted by the council as a report, and no action has been taken on the matter.

A trial run will be coming soon for a satellite office at the city hall in Wilmore. The office would allow residents of the city to do tasks that would normally require a trip to the clerk’s office such as getting new license plates.

The mayor has been authorized to work with the county clerks office to establish a trial run satellite office for a minimum of three days a week, after the state has approved it.

Sims Ball Park has received over $27,000 in donations for improvements. Amy Fitch presented a plan for the construction of a new softball field at the park.

The next meeting will occur at 6 p.m. on Nov. 7. One of the major topics at this meeting will be the council’s consideration of annexing eight acres at the Forbes property on 200 Murphy Lane in Nicholasville,  and the consideration of a zone map amendment recommendation from the Joint Planning Commission for the Legacy Point Golf Course.