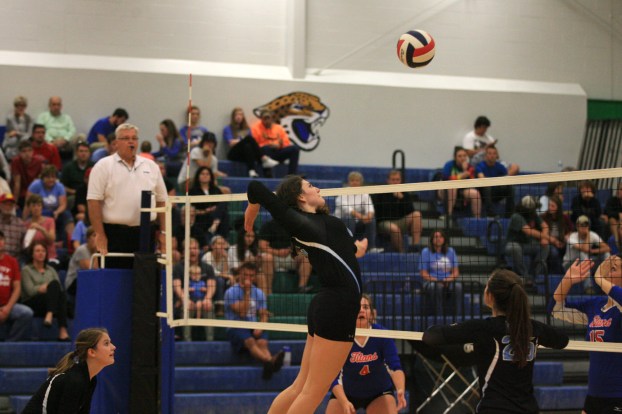 Admittedly, West Jessamine High played far from its best volleyball of the season during its sweep of Mercer County in the 46th District Tournament final on Tuesday.

However, unlike most teams suffering through an off night, the Lady Colts were not only able to sweep the Lady Titans, they never trailed throughout the evening in what became a 3-0 (25-16, 25-14, 25-20) victory.

The win for West was its fifth straight district championship. The Lady Colts have only lost two sets all-time in their five years as a member of the 46th District.

“Kudos to Mercer,” West head coach Bill Bird said. “That’s the best I’ve seen them play. They wanted it and they had a great game.”

Unlike the first meeting between the two teams — a 3-0 (25-7, 25-9, 25-14) victory for West on Sept. 6 — Mercer kept it close throughout. Though the Lady Titans were never able to burst the West bubble, they proved to be just enough competition to make the Lady Colts sweat.

West held a solid lead throughout the first set, but an early Mercer run tightened the Lady Colts’ lead to 13-8. However, a solid outing from the service line by Gabby Crall cushioned West’s lead to 18-10. West would take the first set 25-16.

Mercer was unable to make much headway in the second set, but the Lady Titans threatened in the third set following a 6-1 burst by West. The Lady Titans were able to narrow the Lady Colts’ lead to 9-7.

“We were just flat,” Bird said. “We just couldn’t get it going. I had no answer. I don’t know why … After the game, I pretty much told them, ‘It wasn’t our best night, but it’s a sign of a good team if you can play like that and still pull it out.’”

The Lady Titans would even the game for the first time on the night at 16-all, but West would hold steady and slowly march its way to a 25-20 district championship victory.

Both Mercer and West cemented an at-large bid into the 12th Region Tournament following their opening-round victories in the district tournament. The seeding for the region tournament will be Friday.

West will host the tournament.

But for now, the Lady Colts can briefly relish a streak that few teams will ever enjoy: A five-year reign of dominance over the 46th District.

“I just told them, in the huddle, that, ‘We’re not satisfied (with a district trophy). I want you all hungry for next week.’ That was one of our goals at the beginning of the season. They’re more hungry for the region tournament than this.”

By Doug Eads/Commonwealth Journal With a 17-4-1 record on the season, and University of Kentucky verbal commits Eva Mitchell and Anna... read more