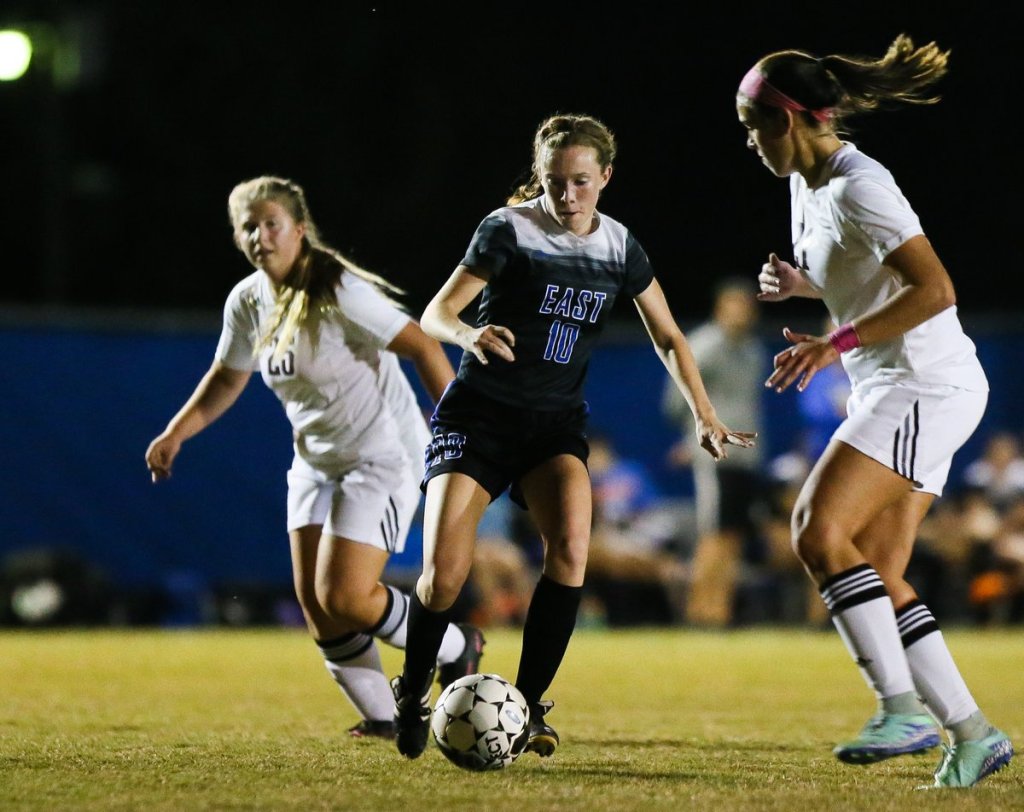 Coming off an 8-10 season from a year ago, Pulaski County girls’ soccer had been the feel good story within the 12th Region in 2016, posting a 14-3-2 record and winning the 47th District Tournament heading into this week’s 12th Region girls’ soccer tournament at Southwestern High School.

First year head coach Keith Rose and his staff had Pulaski feeling relevant once again and that was on display in Tuesday’s first round game against East. The Lady Maroons trailed the Lady Jaguars 2-0 at halftime in their first round game on Tuesday evening, yet battled back to knot things up at 2-2  early in the second frame.

However, East proved to be just a little too much on the night as the Lady Jags escaped with a hard-fought 4-3 win over Pulaski to end the Lady Maroons’ season.

“This started for us in the spring when we were just trying to get touches on the ball, because we were so far behind skill wise,” Rose said. “I can’t express just how proud I am of this team.”

Early on, it was East that took things right to Pulaski. The Lady Jaguars grabbed a quick lead thanks to a goal from Elsie Kibler less than five minutes into the contest that gave East a 1-0 lead. With 3:39 remaining in the first half, East was rewarded a penalty kick due to a foul against Pulaski in the box. Sarah Rocco made the Lady Maroons pay, scoring on the PK to give her club a 2-0 lead at the break.

Despite not playing as well as he thought his team could play, East head coach Zach Welch noted afterwards that he was glad to get out of Southwestern with the first round win, as well as praising the play of Pulaski.

“We knew Pulaski County would fight back in the second half because their season was on the line and our season was on the line,” said Welch. “They scored that goal early in the second half to make it 2-1. Then all of a sudden the momentum in the game shifted, and then you look up it’s 2-2. Kudos to Pulaski County, because they are a solid team that gave a solid effort, and they worked hard the entire game. I know we didn’t play our best soccer, because we didn’t finish on our chances, but we were fortunate to come out on top.”

As Welch indicated, with his club leading Pulaski 2-0 at the intermission, momentum changed big-time in favor of the Lady Maroons early in the second frame.

However, East responded in a big way. The Lady Jags scored moments later to take a 3-2 lead. They then extended that margin to 4-2 with 12:45 left in the contest  thanks to a score from Jenna Dickinson. Pulaski’s Emily Gross cut the lead to 4-3 with just over nine minutes remaining, but the Lady Maroons wouldn’t get any more scoring opportunities after that goal, sending East into the semifinals of the tournament.

“East Jessamine has a really good club, and they deserved to win tonight,” Rose said.”I would have loved to have won this game, and I could have seen either one of our club’s winning tonight and advancing on into this tournament.”