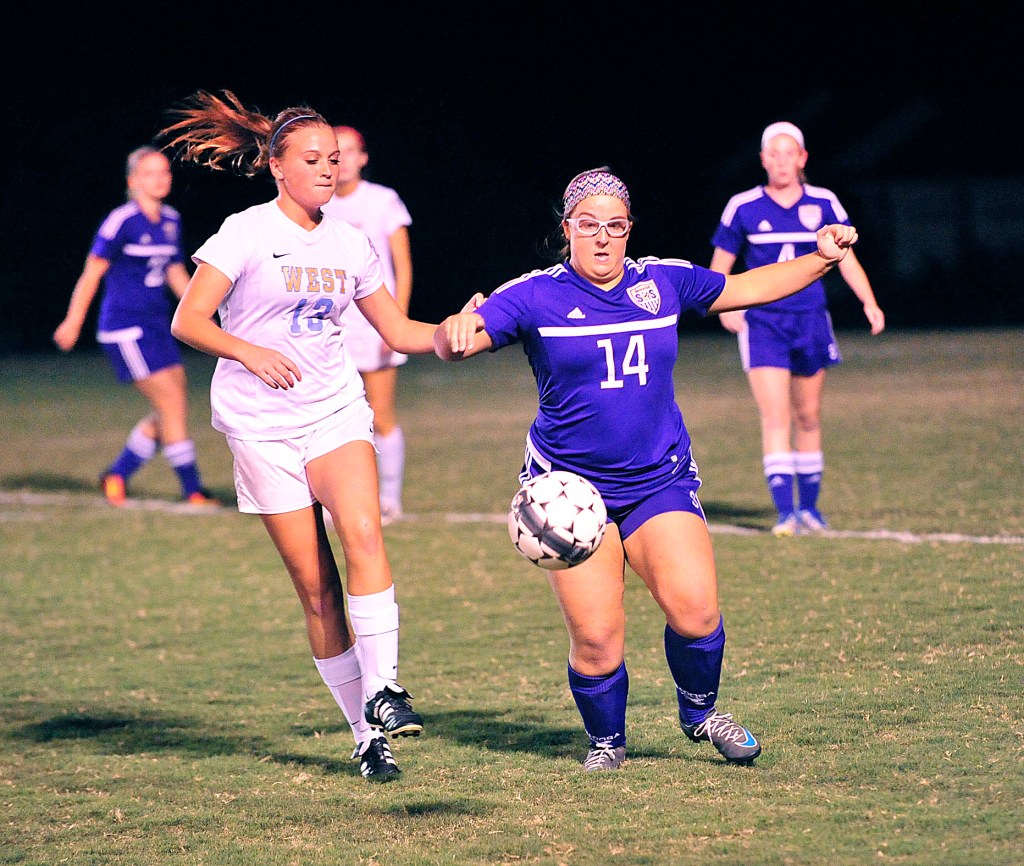 With a 17-4-1 record on the season, and University of Kentucky verbal commits Eva Mitchell and Anna Lee on the field, the West Jessamine Lady Colts were the prohibitive favorite coming into Monday night’s first round game of the 12th Region soccer tournament against Somerset.

Simply put, this one was a big-time mismatch on paper. And, on the field, West proved that sometimes the paper doesn’t lie.The Lady Colts got goals from seven different players in the contest, raced out to a 6-0 lead over Somerset by halftime and never looked back on their way to an impressive 9-0 win over the Lady Jumpers.

“It doesn’t matter who we play or where we’re playing — we’re going to play West (Jessamine) soccer,” stated a happy coach West head coach Kevin Wright following the game. “We want to spread you out, play with a lot of skill and look for lanes, and then look to move forward,” continued Wright. “We’re trying to keep as many options as we can and our motto this year is ‘Wolfpack’, meaning unity. We know that teamwork makes the dream work, and that’s how we’re going to play this year.”

That teamwork was on display right from the beginning in Monday’s second semifinal contest from Southwestern High School, as the Colts immediately flexed their muscles and took the game right to Somerset after Morgan Pence scored the first two goals of the game within the first seven minutes.

Mitchell then followed with the first of her three goals, which gave West a quick 3-0 lead over the Lady Jumpers.

And there would be more — much more.

Mitchell would score twice more in the first half, with both scores coming courtesy of nice assists from Lee.

Caroline Absher, Delaney Long and Kami Yantz would also tally scores in the opening frame, giving the Lady Colts a comfortable 6-0 lead at the intermission.

“We had a game plan coming in to try to be conservative, but West (Jessamine) is a phenomenal team,” stated Somerset coach Erin Mullins after her team ended its season with an 8-14 mark. “We needed to end the season on a more positive note, but when you get beat by a team that has a chance to win a state title that’s OK, I guess,” continued the Lady Jumper coach. “We’re young, and once we can get some people healthy next year and coming back, everybody had better watch out. We just had some crazy injuries this year and hopefully we’ll get everybody back next season. I think we will be a team to contend with.”

Already leading Somerset by 6-0 at halftime, Wright elected to pull most, if not all, of his starters to begin the second half, giving his team a chance to conserve energy for later in the week. In that second half, the West reserves got the job done, as well.

Sophie Bish, Grace Galus and Megan Byrnes all tallied scores after the intermission, giving West its final margin of victory over Somerset at 9-0.

With the win, the Colts will move to Wednesday’s first game at Southwestern High School in the semifinals, where West will square off against the Danville Lady Admirals.

The Lady Ads punched their ticket to the semifinals by winning Monday’s first game over the host, Southwestern Lady Warriors, by a final score of 4-0.