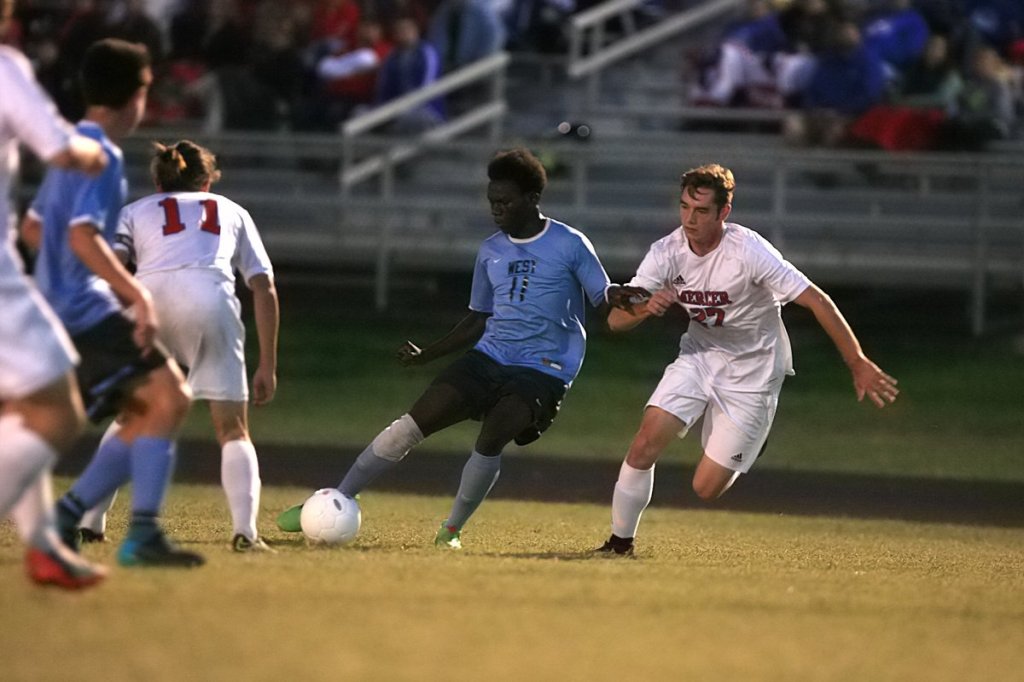 The West Jessamine boys’ soccer team had few answers against Mercer County on Thursday during the 46th District tournament championship as the Titans cruised to a 4-0 victory at the East Jessamine soccer fields.

The victory was the fifth straight district championship for Mercer. The Titans have not lost a 46th District tournament game since they moved over from the 29th District in 2012.

“I thought we played pretty well, especially in the second half,” Mercer coach Garrett Stark said. “That first half we came out really quick and scored a goal, so I thought we were going to be able to connect some passes and score a few more in the first half. But we struggled on that.”

With just over a minute gone in the first half, Mercer jumped ahead 1-0 after Garrett Dean scored on an assist from Brandon Ballard. However, the Colts appeared to settle down following the goal. Though their offense failed to generate any open shots, their defense, led by keeper Trey Miller, bailed them out on numerous occasions.

“He’s sensational,” West head coach Brock Sutherland said of Miller. “If we don’t have Trey, we lose 7-0; Elijah Young was brilliant tonight, too. That’s exactly why they’re the captains.”

Due to West’s stout first half defense following the early goal, the Colts entered the half trailing just 1-0 against the two-loss Titans.

The defense of West would break just seconds into the second half when Mercer’s All-Time leading scorer, Cody Shackleford, netted his first goal of the game. The goal put Mercer up 2-0.

“Both times we played them this season we gave up goals in the first two minutes, so we were trying to focus on the first 10,” Sutherland said. “If we could get through the first 10 then we’d see what happened. We just weren’t prepared to play.”

From there, West remained on its heels throughout second half. The Colts were unable to string together passes nor open shots, which enabled the Titans to open the floodgates with 10 minutes left in the game.

Ballard inked his name on the stat sheet following his header on a corner played beautifully by Marcus Lewis. That was followed four minutes later by yet another assist by Lewis, this time to Dean.

And just like that, Mercer led 4-0 and would hold on to preserve a hard-fought victory in a game that saw one yellow card (West’s Oluwadunsin Adeliyi) and numerous players going down with minor injuries.

“Any time it’s the postseason it’s going to be a physical game,” Stark said. “Everybody wants to win a championship game so we expected it to be physical tonight.”