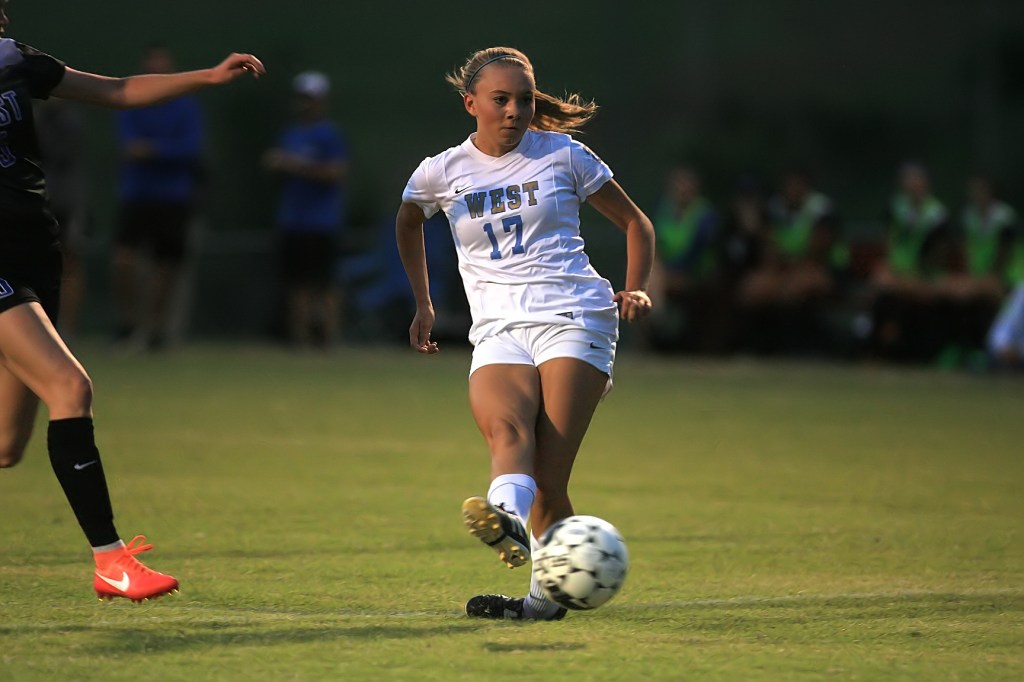 For six years, the West Jessamine High girls’ soccer team has held sway over both the 27th District and the 46th District.

The Lady Colts’ reign continued on Wednesday as they pounced on top of rival East Jessamine early and rode four Eva Mitchell goals to a dominating 6-1 victory over the Lady Jags.

“It’s just the commitment of these kids,” West head coach Kevin Wright said of the consistent success. “They’re high character. They give up their vacations … I attribute it to dedication. We went two-a-days from 7 a.m. and 7 p.m. and you know, when you work hard, have a good attitude and everybody does it together, nobody cares who gets this or that.”

After a season in which the Lady Colts held a 8-2 goal advantage over the Lady Jags, the task of upending a West team that’s gathering steam entering the postseason appeared to be a tall order for East. That notion was evident from the onset as the Lady Colts wasted little time jumping ahead as Mitchell scored the first of her four goals just five minutes into the game.

Mitchell’s goal followed two consecutive shots by Lee that clanked off the crossbar; however, Lee would record her first goal just two minutes after Mitchell’s following great ball movement from both Tara Martin and Mitchell.

Before East could take a deep, steadying breath, West had pulled out to a 2-0 lead. That deficit only increased midway through the first half when Mitchell scored her second goal of the game. Then Lee, once again, followed Mitchell’s goal with one of her own after a perfectly placed through-ball by Kami Yantz.

Now down 4-0, East was facing a monumental comeback just to even the game. However, the Lady Jags briefly stopped the hemorrhaging after Kaitlyn Maricle’s free kick soared over West keeper Taylor Perdue’s head with five minutes left in the half.

East went into the half trailing 4-1.

Then with 13 minutes gone in the second half, Mitchell inked her hat trick on a Martin assist. Minutes later, Yantz’s free kick set up Mitchell, who deftly danced though the East defense, allowing her to score her fourth goal of the game.

After the district championship victory was securely in the bag, three Lady Colts were awarded with 46th District All-Tournament honors: Lee, Mitchell and Martin; East had two players awarded: Miracle and Sarah Rocco.

“We’ve had about 70 practices and we’ve played 25 games counting the Bluegrass State Games, Western and Asbury, and it goes fast,’ Wright said. “I brought an old picture (of the players) into practice when they were in middle school and they were all 6th and 7th graders. I showed them and said, ‘This is how fast it goes.’”