A collision between two vehicles ended in one being flipped completely upside down at the intersection of Main Street and Orchard Drive on Monday.

The driver of the Ford Escape that flipped, Harry Brooks of Nicholasville, was suspected to be under the influence.

Brooks had to be extracted from the vehicle by the Nicholasville Fire Department, he was then transported to the University of Kentucky Hospital for his inj

ures. He was sited and released at UK.

“It was suspected to be drugs not alcohol so there was no breath test given.” Harvey said.

The owner of Jeep Wrangler, Richard Loghry, was not reported to have any injuries. 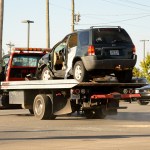