The woman with the Hope tattoo 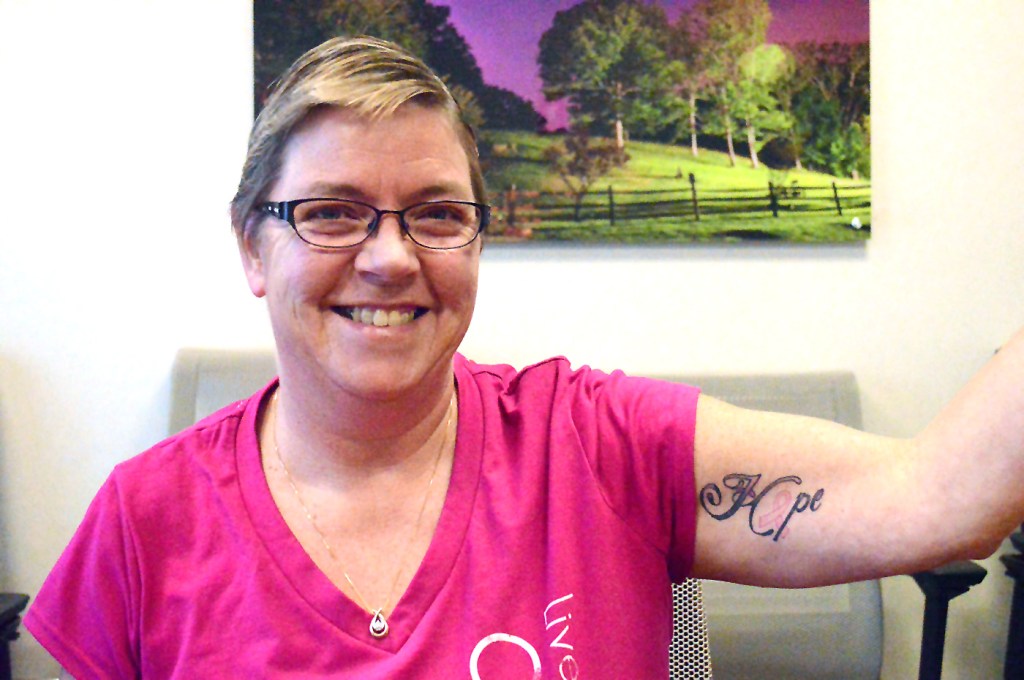 On November 7, 2012, a screening mammogram for one Nicholasville woman turned into a year of treatments.

A week after Laura Bradley went for her routine mammogram, the doctors called wanting her to come back for additional views.

“Which is not that uncommon,” Bradley said. “So I thought nothing of it at that point.”

The next week, on her birthday, Bradley sat in the waiting room at KentuckyOne Health-Saint Joseph East, wondering why the doctors were taking so long to come back with the results.

When the doctors finally came, they told her they found little grains of sand in her breasts and they wanted to do a biopsy.

“It kind of throws you back a little bit, but I still didn’t think nothing of it,” Bradley said.

The next week, she had a biopsy. The next day, the doctors called to confirm it was cancer.

After that, many more tests followed, and Bradley said it took a while to sink in.

“It basically blindsided me because I had no history of this,” she said. “So this can’t be possible.”

Life still goes on, and the next day she had to go about hers as normal, going to work at KentuckyOne Health-Saint Joseph Jessamine.

“I came back to work the next day, and I didn’t know how to face anybody knowing what I was going to have to tell them,” Bradley said.

Her family, who lives 800 miles away, had to get the news over the phone, but Bradley said she felt it was easier that way.

Things tend to move very quickly after the initial shock of finding out, and mentally, you dont have time to process everything. You just go through the motions of what they tell you to do, she said.

“Just get it done and get it out.”

Luckily, Bradley knew one of the women who worked at the Saint Joseph Breast Center, so she had her for moral support and for helping her keep track of all the places she needed to go and what times she needed to be there.

Within two weeks of being diagnosed, Bradley was ready to have the cells removed.

Though Bradley opted for a lumpectomy, she still had to sign off for a mastectomy, just in case the doctors found more cells during surgery and felt they needed to do one.

You don’t know what you are going to wake up with, Bradley said.

After surgery, Bradley had to meet with a radiation oncologist, the person in charge of radiation treatments, then an oncologist, a person who specialized in chemotherapy. Between the two, the best treatment will be decided based on factors such as age, stage of cancer, family history and location of the cancer.

This is when Bradley found out she had stage one out of four stages of cancer.

At first, the radiation oncologist told Bradley she didn’t think they were going to have to do radiation treatments and if they did, it would be in that centralized area. Not even an hour later she was told by the oncologist the cancer needed to be treated aggressively and that chemotherapy was the way to go at it. He told her treatments needed to started as soon as possible.

Bradley was told she would need four months of pretty harsh chemo treatments, around the time of the holidays.

To keep from being stuck by a needle every time she had treatment, and potentially ruining her veins, Bradley opted for a port. A port is a small disc made of plastic or metal that sits just under the skin, a soft thin tube called a catheter connects the port to a large vein were the chemotherapy medicines are administered through a special needle that fits into the port. After the chemotherapy is done the port is removed.

Bradley received her port about a week after Christmas. A week after that, she had her first chemo treatment, which lasted nine hours.

The medicine had to drip into the port at a very slow pace at first, to watch for bad reactions to the medicine such as hot flashes, shortness of breaths or becoming flush. At first, Bradley did react this way to one of the medicines.

She had to go every three weeks for four months for these treatments.

Before the treatments begin, the doctors go over side effects that may or may not happen to a patient during chemo.

Bradley said she laughed at most of the ones they listed.

After her first treatment, Bradley’s hair began thinning out, so she cut four or five inches off to prepare for the next stages of chemo.

Following the next treatment, she awoke to clumps of hair on her pillow.

Bradley immediately called her hair dresser to have her hair shaved down to stubbles.

“It’s a very harsh process to absorb all the changes your body’s going through in short time,” Bradley said.

The third day after treatments were the worst she said.  She experienced loss of energy and didn’t want to do anything.

“All you wanted to do was just lay on the couch,” she said.

With every treatment her symptoms worsened.

She also experienced weight gain from other medicines and the chemotherapy threw her into early menopause.

“You throw your body into a little fit, and it doesn’t know what to do,” Bradley said.

There was one side effect she did not endure—sickness—which was the one she said she would stop treatment if it occurred.

Once chemotherapy was finished, the radiation treatments came next.

Monday through Friday, every day for six weeks, Bradley had to drive to Lexington for radiation treatments that took 10 to 12 minutes each.

Radiation ended at the end of June, and an infusion drug she was on lasted until December. She will continue to take a hormone blocker for the next year and a half, and she still has follow ups every six months.

“That whole entire year, it was a complete big blur,” Bradley said.

During that time, she kept her job that she has had since 2009, as an Emergency Department Technician at Saint Joseph in Jessamine County. She said she only missed two shifts during that year, and everyone at the center worked around her treatments. She said her job was one of the factors that kept her going.

“I feel like crap, but I wanna got to work because I don’t want to let this thing get me,” Bradley said.

Another motivator for her was her wife, Debbie Jenkins, who she married six months before she was diagnosed.

“I told her I would be there no matter what,” Jenkins said. “I was there through all the treatments. She’s my hero. I’m so proud of her after what she went through.”

Now, Bradley said she tries to make sure that all women around her get their mammograms.

• Women ages 40 to 44 should have the choice to start annual breast cancer screening with mammograms (x-rays of the breast) if they wish to do so.

• Women ages 45 to 54 should get mammograms every year.

• Women 55 and older should switch to mammograms every two years, or can continue yearly screening.

ACS recommends women be familiar with how their breasts normally look and feel so that they can report any changes to a health care provider.

Bradley’s next mammogram is coming up next month.

“I think I’m more nervous going there than doing anything else,” she said.  “Because once you’ve been through it once you never want to go through it again.”

Though the saying goes, after the five year mark, your home free, Bradley said she still gets nervous.

“It’s always in the back of your mind,” she said.

Right after her treatments ended, Bradley got her tattoo of “Hope,” with the “o” as a breast cancer awareness ribbon. She said it is a reminder of what she went through. The tattoo looks like it spells out the word “Cope,” as well, this was a coincidence made in the drawing up stage of the tattoo.

Bradley said she doesn’t let things bother her the way they used to, because she realizes that life is too short and she wants to live hers to the fullest.

She recently went to Hawaii with her wife simply because they had really been wanting to go.